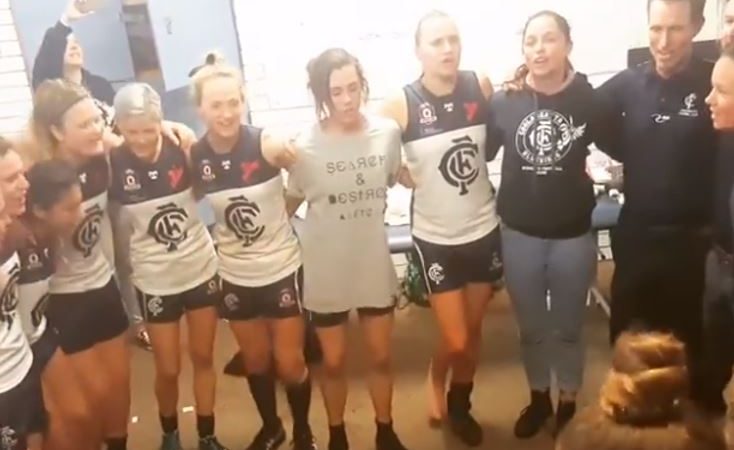 Yeronga South Brisbane has salvaged their 2018 season with a gutsy 35-point win over Maroochydore on the weekend.

For so much of the 2018 Bond University QWAFL, the Devils loomed as a team likely to miss out on finals, but their victory over the Roos – their fourth of the year – has catapulted the side back into the conversation for a place in September.

The win jolts Yeronga into fourth spot, leapfrogging Bond University, who have remained in the finals bracket for much of the season, and University of Queensland, a team many have suggested will make a dash for fourth position.

Yeronga now find themselves the front-runner to finish in four positions following the win, but with a number of high-stakes matchups in the coming weeks, their return to finals conversation is still up in the air.

Rain poured before the game on the Sunshine Coast – the only game from Round 13 to experience such wet conditions; turning the field into a hypothetical mud pit.

The Devils got the fast start in the game with two opening term majors, but the away side quietened in the next two quarters adding just seven more points to their name.

Maroochydore leaped into life in the second half as Georgia Doherty kicked her side’s first to draw the margin within two goals.

But with their season seemingly on the line – a big win was required by the Devils to improve their percentage above the Bullsharks – Yeronga dominated the scoreboard in the final stanza to run away five-goal victors.

Courtney McDonnell and Jade Ransfield both kicked two majors in the game, while Demi Leach also found herself among the goal kickers for the fourth consecutive week.

This week, Yeronga will put their final credentials to the test against an in-form Coorparoo side, while Maroochydore have the bye.

Three-goals from North Melbourne AFL Women’s midfielder Jamie Stanton steered Wilston Grange to their 11th consecutive win in the QWAFL as the side continue to draw closer to Coorparoo’s undefeated record of 15 games.

With just three games left in the Gorillas’ home and away season, it would require a premiership win in the Grand Final for the QWAFL record to be broken.

But as it stands, that prospect appears a genuine possibility given how the side have been able to play throughout this season.

Against the Bluebirds, their dominance was no difference. Five players, including Stanton, booted goals in the game.

Despite the final score-line – a 49-point deficit – Coolangatta provided a genuine contest through the midfield, keeping the Gorillas to their lowest score in a fortnight.

Wilston Grange produced three goals in each of the opening two quarters, but were outmuscled in the third term by the Bluebirds.

At half time, the margin was 36-points, but Coolangatta won out in the third, booting two goals; their only two of the games, while also rending the Gorillas’ rampant attack tow just one behind.

Wilston Grange kicked another three majors in the final term but the Bluebirds’ three-quarter resurgence proved that the Gorillas could be broken.

The loss increased the gap between the Bluebirds and second-placed Kings to two wins, but provided the Gold Coast side with a sound expectation for what awaits the team in September.

The Bluebirds have an opportunity to avenge their loss in a Round 14 match-up with Bond University – the second time in three weeks the two sides will face off.

Meanwhile, the Gorillas will host a University of Queensland side whose season hangs by a thread.

Coorparoo has all but booked its ticket for a place in the 2018 Bond University QWAFL finals following the side’s 109-point win over Bond University at Giffin Park on Saturday evening.

The Kings led from start to finish in the free-flowing affair, benefiting from the plethora of experience among the Kings’ ranks all over the field.

The home side wasted no time to get their first score on the board in the contest as Jess Wuetschner opened her goal scoring account for the game inside the second minute.

A star studded forward line, which included Jenae Govan, Wuetschner, Emma Zielke and Allie Anderson was far too much to handle for the young Bullsharks.

By halftime, the margin had extended to 82-points after the Kings piled on another 39-points in the second term.

Following the main break, Bond University adjusted their tactics and restricted the home side to just four second-half goals.

The Kings too tinkered with their line-up after the break, deciding to float Wuetschner through the midfield and captain Cleo Davis down forward in the final term.

Jenae Govan was again the star for Coorparoo as the biggest beneficiary of the Kings’ midfield dominance.

Govan booted eight goals in the game; extending her lead as the QWAFL’s leading goal kicker by seven majors.

The Bullsharks were held goalless for a second straight week and face the prospect of testing themselves once again against Coolangatta Tweed in Round 14.

Meanwhile, Coorparoo host Yeronga South Brisbane who have injected life into a season following their Round 13 victory.