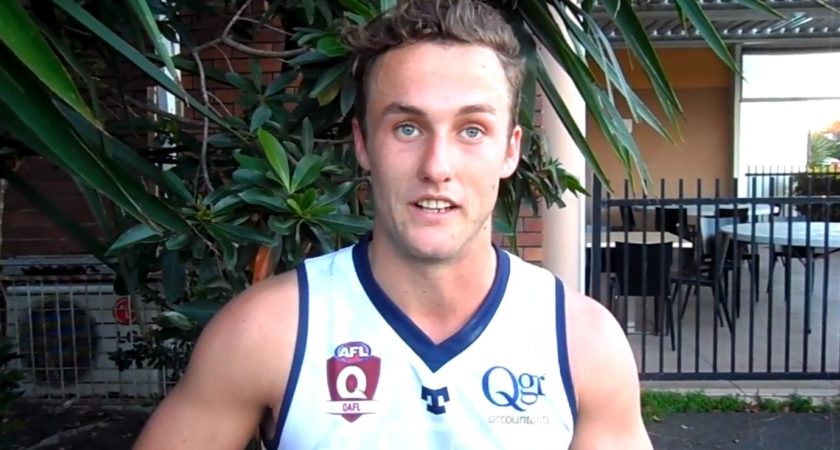 Palm Beach Currumbin forward James Holland has climbed to 13th overall in the Syd Guildford leaderboard after claiming seven votes in Round 12.

Holland produced a dazzling performance inside 50 for the Lions in their win over arch rivals Labrador, booting an equal game-high four goals.

The seven votes Holland earned in Round 12 catapults him to 13th place in the overall leaderboard and with arm’s reach of the top ten.

Holland was one of four Lions players to kick four goals in the game alongside Tyler Cornish (four votes) and John Anthony (three) and was one of two players to poll seven votes in the Lions’ victory.

Jason Burge – who moved back inside the top ten with seven votes, Dirk Koenen (four), Hunter Hall, Thomas Thynne (both one) were fellow Lions who also earned votes in the contest while Tigers defender Wayde Mills (three) was the only Labrador player to do so.

Morningside’s upset Round 12 win over second-place Broadbeach was in large due to the best on ground performance to breakout midfielder Campbell Wearne.

Wearne, who was in second place in the Syd Guildford Trophy prior to the game, earned the maximum ten votes in the contest to move into first place overall.

Wearne went head to head with former leader Blake Erickson in the midfield but the latter failed to poll a single vote and now finds himself in second place for the first time since Round 6.

Broadbeach pair Nicholas Upton (four) and Evan Panozza (three) were the only Cats to feature.

The Western Magpies dominated voting in Round 12 after the club ‘s underdog win over third placed Mt Gravatt.

A plethora of the Magpies’ contingent drew the praise of both coaches in the game, headlined by high-flyer Jake De Winter, who top-scored in the contest with nine votes.

Riley Easton (seven) and Drew Mitchell (six) were among his teammates to also feature, while Vulture ruckman Jarrod Huddy (four) was the lone Mt Gravatt player in the votes.

The dominance of Palm Beach Currumbin and Western Magpies in the Syd Guildford voting was replicated by Surfers Paradise after their dominant win over Sandgate at Lemke Road.

Hawk Jordan Harding, who poled a single vote, was the only Sandgate player among a sea of Demons in the votes.

See the full Round 12 votes below.