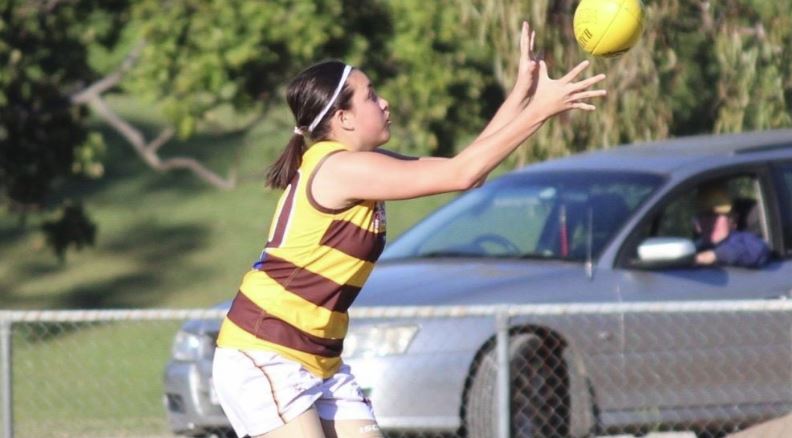 Jindalee and Sandgate have prevailed in the newly established QWFA Division 2 North competition, booking their spot in the inaugural Grand Final showdown.

Throughout the home and away season, Jindalee have been the standout team of the competition, finishing as Minor Premier with an undefeated 12-0 record and an impressive 530.97 winning percentage.

Throughout the Finals the Jaguars have continued their fine form with a 58-point Semi Final win over the Hinterland Blues a fortnight ago.

Sandgate’s road to the big dance hasn’t been as smooth, but the competition’s underdogs have a point to prove; especially following their Preliminary Final win over the Blues last weekend.

The Hawks finished the season in third place and claimed wins in three of the last four matches to round out their regular season.

Having seen off Pine Rivers in the first week of finals, the Hawks’ claimed a big scalp over second seed Hinterland to qualify for the final game of the season.

Hawks pair Kara Fabian and Brooke Jarrott have emerged as key pillars for the north-side team this season and loom as large influencers in their showdown with the Jaguars.

Jarrott led all-comers for Sandgate on the scoreboard, booting an equal-team high 18 goals this season while Fabian has been a team-high seven times including best on ground performances in two of her last three games.

It’s a similar story for Jindalee pair Laura Sevil and Torrie Boyd, who finished second and third in the competition’s goal kicking with 30 and 25 goals respectively.

Jindalee have had the wood over Sandgate so far this season, but the Hawks’ Cinderella run will ensure the division’s title will go down to the wire.

The QWFA Division 2 South Grand Final appears as difficult to predict as any, especially given the results of the matchup between the two sides a fortnight ago.

Throughout the regular season, Morningside appeared as the runaway favourite of the competition, losing just one game in a campaign which also saw them finish as Minor Premiers.

The Panthers boasted an average winning margin of 50 points and their stout defence restricted opposition teams to an average of just seven points from Round 7 onwards.

But in the first week of the finals, their dominance on the competition came under fire from the Roos, who are perhaps the most inform team of the division.

After a tight opening three quarters, the Roos ramped up the pressure and secured their Grand Final place with a 17-point win.

Of course, Morningside responded last week with a strong win over historical rivals Mt Gravatt to qualify for the Grand Final.

The three games between the two sides have been settled by an average of 19 points with the Panthers leading the contests 2-1.

Robina are the only team to kick more than 800 points this season and are led by the competition’s leading goal kicker Sarah Ellis (32 goals) and Roslyn Manns (26 goals), while the Panthers have conceded just 94 points to teams this season. Fair to say they are a tad miserly in defence.

Julie Seed looms as a key cog for the Panthers’ side today after a stellar season in the black, white and red. Seed has been named in the side’s bests eight times; more than any other Panther.

Augurs well for an outstanding contest from two teams in their debut year.

The QWFA Division 1 Grand Final will be contested between two teams who emerged in 2018 as the clear top sides in the division.

Aspley and Coorparoo lost just one game each throughout the regular season and both have a point to prove on the biggest stage of them all, more so given the result of the Qualifying Final between the two.

Coorparoo had early bragging rights in the Finals after leapfrogging the Hornets in the final round of the home and away season to claim the Minor Premiership with a 142-point win over Maroochydore.

But the Kings’ tenure as the division’s first seed didn’t last long as the Hornets won out in their Semi Final matchup to earn qualification into the Grand Final.

Aspley’s 46-point win over the Kings a fortnight ago was the biggest margin between the two teams this season.

Earlier in the year, the Hornets claimed the four points again, this time by 21 in what was Coorparoo’s only loss of the season.

Coorparoo responded from their loss however, taking full advantage of their double chance to defeat Burleigh and make the Grand Final the third encounter between the two sides this season.

On the scoreboard, the matchup boasts two players who love to find their way onto to goal kickers’ list.

Aspley’s Chloe Macdonald finished with 44 majors to lead the competition and booted two in the Semi Final showdown against Coorparoo.

For the Kings, Meg Pullinger will be key as the only other player in the competition to kick 40 goals.

In her last three games, Pullinger has kicked an unprecedented 22 goals, including six in the Kings’ win over Burleigh last weekend.

While the Hornets have claimed two wins over the Kings already, little has separated them all year, but today’s game will finally define the true best.