Queensland’s Tom Hickey and his “role” in the Buddy show 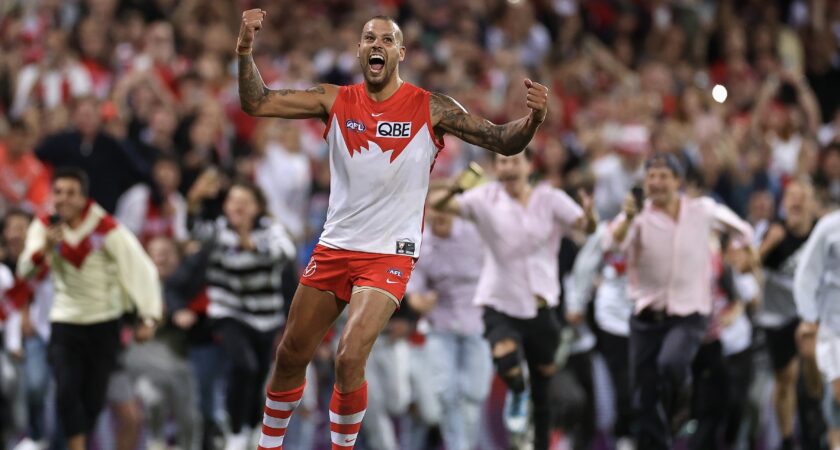 Tom Hickey will always be able to tell his children and his grandchildren he was there when Lance Franklin made football history. And that he even made it happen.

It’ll be a bit of a stretch, but that’s what time does. It allows half stories to get a whole lot better.

It’ll be like the Mal Michael moment, when, in his 34th game for Collingwood on 6 June 1999, the big Queensland fullback stood on the mark as Tony Lockett kicked his 1300th goal to break the AFL record.

With his tongue firmly in his cheek, Hickey will claim that without him playing for Sydney against Geelong at the SCG last Friday night ‘Buddy’ would not have become the sixth player in AFL history to 1000 goals and the SCG would have been denied one of the great moments in sport.

The story for the Swans Queensland ruckman will go something like “Bud was stuck on the bench and if I hadn’t interchanged myself in the last couple of minutes he would not have got back into the game. And then I won the ball which eventually ended with him for his 1000th.”

It wasn’t quite that way. About 10 minutes from full-time Franklin was among four Swans having a scheduled spell on the bench. Three Swans came off and three went on. And the man of the moment was still there, pacing anxiously around the interchange area. Anxious, yes. But nearly out of time? No.

A couple of minutes later Hickey took a scheduled rest which allowed Franklin back on.

Tom Hawkins goaled for Geelong and the ball went back to middle. Hickey, back after a short spell, won the tap but Ollie Florent over-ran it and Patrick Dangerfield cleared for the Cats. Callum Mills won it back for the Swans at half back and gave it by hand to Chad Warner who ran, went long by hand to Florent and ran on to get it back.

Warner ran to the 50m arc and chipped a beautiful pass to Franklin, who had got away from Cats defender Jack Henry. And from 30m on a 45-degree angle ‘Bud’ did the rest. And more than 30 minutes of mayhem broke out as 20,000 people swarmed the SCG in a celebration the likes of which we’ll probably never see again.

Hickey, who has become a huge Franklin fan since joining the Swans, stood close to the champion forward as he speared a perfect drop punt through the big sticks and was one of the first players to him before, like each of his teammates, he became just another part of the backdrop.

If he really wanted to add some extra ‘mayo’ to the story he could tell how he inexplicably took a wrong turn getting off the ground and ended up walking down Driver Avenue outside the ground trying to find a way back in. But that was Gulden and Florent.

He could tell how, as fans invaded the playing arena, he collided with a man who, in the collision, dropped his keys. And how he had to chase after the intruding spectator to give the keys back. But that was Geelong’s Zac Tuohy.

He could tell how he arranged for his wife to steal a moment during the mayhem and spread her grandmother’s ashes in the middle of the SCG, but with three children under three of her own that was never going to happen. It wasn’t her.

He could insert himself into the story of how coach John Longmire took a player headcount in the rooms as they prepared to return to the game and found a few missing, claiming he was one of them. But he wasn’t. He was right next to Bud enjoying the moment in the rooms.

Still, all that aside, the moment will live with Hickey forever. And over a beer with mates down the track or even at the odd sportsman’s night he’ll be able to provide an insider’s assessment of the moment Franklin joined Gordon Coventry, Doug Wade, Jason Dunstall, Lockett and Gary Ablett Snr in the 1000-Goal Club.

It’s another little bonus to the story of the one-time Alexandra Hills and Morningside ruckman who, now at his fourth AFL club, has taken his outstanding form of 2021 into 2022.

Averaging 16 possessions, 26 hit-outs and six clearances through the first two games of the year, he has become a critical figure in a young Swans side that looks a genuine contender.

In other Queensland news from Round 2 of the AFL season:-

Adelaide’s Ben Keays completed back-to-back games of 37 possessions in his side’s one-point loss to Fremantle and after two rounds is the second-highest possession winner in the League. Only Melbourne’s Christian Petracca (78) has more, while Keays is level with Western Bulldogs’ Jack Macrae (74) and two up on Brisbane’s Lachie Neale (72).

North Melbourne’s Bailey Scott won lavish praise from coach Dave Noble after an excellent showing in a game that will always be one of his more bizarre, when the Roos beat a barely recognisable West Coast side hit by Covid protocols which had 14 changes from Round 1.

Among those playing their first game for the Eagles were Aaron Black, a 29-year-old Sandover Medallist from West Perth making his AFL debut at 29 as a top-up player, a 29-year-old Angus Dewar who played 25 games with Hawthorn as Angus Litherland from 2014-16, and a 25-year-old Declan Mountford lining up against the club where he played 12 games in 2017.