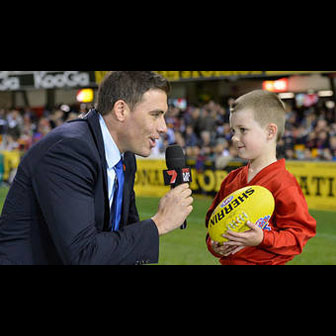 Small in stature, big in heart.

That’s a phrase that symbolizes all of Australia’s NAB AFL Auskicker’s and each year NAB and the AFL search for the Auskicker who best demonstrates the spirit of the game – dedication, enthusiasm, teamwork and passion.

The Round 10 nominee was Queensland’s own, Cooper Wojcik, who plays for Ferny Grove JAFC.

Along with the nomination, Cooper was invited as a special guest to watch the Lions take on Collingwood at the Gabba on May 31st.

At half time he was interviewed by Matthew Richardson, where he told the Richmond forward that being out on the Gabba was a lot of fun, his favourite thing about Auskick is playing up forward so he can kick goals and his favourite player is “Milney”.
Little Cooper was then treated to a kick-around with ex-Geelong Captain, Tom Harley.
Cooper’s parents say he should be the NAB AFL Auskicker of the Year because “He is the first one at training, the last to leave and always works well with his fellow Auskicker’s, letting everyone have a go.”

As one of the twenty-two selected nominees, Cooper has now won himself a money-can’t-buy AFL Grand Final experience to enjoy in September.

And if he is lucky enough to be chosen as the overall winner, Cooper will receive $5000 and Geelong Captain, Joel Selwood, as a footy mentor. Congratulations Cooper, keep up the good work and enjoy your footy!