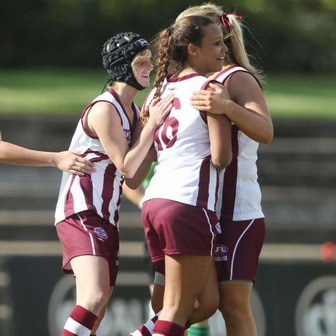 Queensland have handed NSW/ACT an 89 point thrashing on day 2 of the 2012 Under-18 Youth Girls National Championships in Adelaide.

After losing to Western Australia by 13 points when they ran out of legs, the Sunfire girls looked full of running in today’s clash.

Queensland burst out of the centre square to peg a quick opening goal through the hard work of Megan Hunt.

Clean ball handling and strong running was the feature of Queensland’s game for 4 quarters and despite strong overhead marking and numerous attempts to push into their forward line NSW/ACT could not convert.

The longer the game went on, the more the NSWACT girls fell prey to some excellent bumps from the opposition and at times friendly fire that resulted in several injuries to key players.

Queensland’s Caitlin Collins played out of her skin, driving her team forward frequently with good support from Emily Bates and Megan Hunt.

'Dreamtime by the Sea' in Cairns
Umpire Round deemed a success