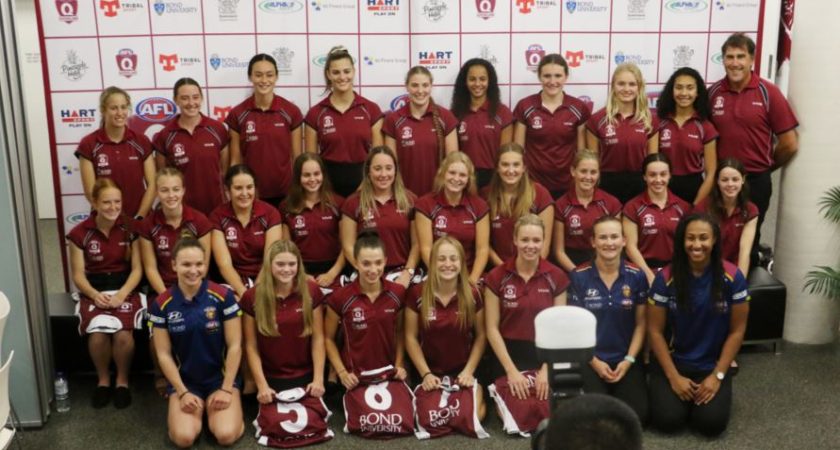 The Queensland Under-18 state representative side have named their 24-player squad for Round 2 of the NAB AFL Women’s Under-18 National Championships on the Gold Coast next week.

Four changes to the side have been made from the team that travelled to Perth last month for Round 1.

Over the past month thirteen players in the side have garnered Brisbane Lions and Gold Coast SUNS experience through the Women’s AFL Winter Series.

The Brisbane and Gold Coast regions are well represented in Queensland’s side with seven players, while North Queensland (six), Sunshine Coast (two) and Darling Downs (one) make up the remainder of the squad.

Queensland will play three games next week in Round 2 across three venues on the Gold Coast, kicking off against Victoria Country at Metricon Stadium on Monday.

Wednesday will see Queensland host Victoria Country at Broadbeach and on Friday, the team will face the Eastern Allies at Bond University to conclude Round 2 of the NAB AFLW Under-18 National Championships.

Speaking at the presentation, Queensland Head Coach, Craig Starcevich, was excited about the week ahead.

“We hope the next week will be a fantastic experience. I can’t wait to get down there,” Starcevich told aflq.com.au.

“It’s never been a better time to be a junior female footballer coming through.”

“We’re at home again so it means the other teams are coming to play us on our home turf. We’re familiar with the ground that we’re going to be playing on and it’s an exciting time.”