QLD’ers in the AFL: Luke McGuane 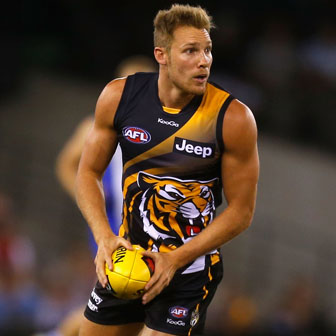 Known and loved amongst the Tigers faithful as a courageous and resolute footballer, Luke McGuane’s AFL rise began long before his arrival at Punt Road.

A humble beginning in Queensland was where it all started for Richmond’s “Cool-Hand Luke”. Born and raised on the Gold Coast, Luke played football  junior football in Brisbane from age 11.

McGuane is the son of former Southport Sharks captain Gavan McGuane and the nephew of Collingwood premiership player, Mick McGuane. After representing Queensland at U/16 and U/18 level, Luke pursued a senior football career for the Broadbeach Cats in 2004.

Shortly after joining Broadbeach, McGuane entered the 2004 National Draft. Touted as a future ruckman or key forward, the 17-year old was drafted by Richmond with Pick 36. After being drafted he joined Richmond’s VFL affiliate, Coburg.

At the start of the 2005 VFL season, McGuane suffered a severe fracture of his humerus bone. The injury required surgery and sidelined the talented rookie for the remainder of the year. Upon his return from injury, McGuane played for Coburg in defence, utilising his tall frame. Consistent form and improvement was rewarded with a call up to the senior list and his subsequent AFL debut in Round 7, 2006 against defending premiers Sydney. His first outing as an AFL footballer was a tough pill to swallow however, held to 3 disposals and on the receiving end of a 118 point hiding.

In the following years, McGuane cemented his place in the Tigers defensive line, playing a key role as the centre-half back until the end of the 2011 Premiership season. His career stalled in 2012 however as he struggled to find a spot in the sides best 22. With the help of Richmond forward line coach Mark P. Williams, McGuane was encouraged to change positions to rejuvenate his career. “I did need a change, I’d spent eight years down back, even though I got drafted as a forward” said McGuane. “Mark wanted me to play as a forward again and I felt really good about it” he said.

The switch from defence to attack proved successful, and after missing the first 14 rounds of the 2012 season, McGuane was selected in the forward line for Richmond’s Round 15 clash with Melbourne. He went on to play the final 9 rounds of the season, kicking 15 goals, which provided a sorely needed forward option to assist teammate and Coleman Medallist Jack Riewoldt. McGuane’s late season form was rewarded with a one-year contract extension.

The 2013 Premiership season continues to attest McGuane’s late 2012 display was no fluke, averaging career high 13.7 disposals and kicking 7 goals in the first 3 rounds. He continues to reinvent himself as a player, showing off his aerial abilities with a Mark of the Year contender taken in Round 2 over St. Kilda utility Jason Blake. With the Tigers searching for a finals berth for the first time since 2001, Queensland’s own McGuane could prove to be the X-factor in Richmond’s 2013 campaign.