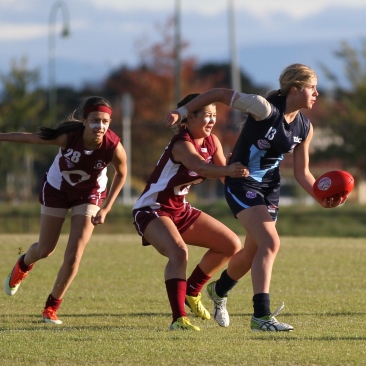 A thrilling finish after three grinding quarters saw the highly fancied Victoria Metro side overcome a determined Queensland team by just one point, 1.3 (9) – 1.2 (8).

With the first goal scored in the last half of the fourth quarter, both teams had not seen much action inside fifty until a contentious goal by Luana Healy after the whistle was paid.

Victoria, who haven’t been held goalless since they took on Queensland in the 2011 tournament, were quick to respond with a goal from a free kick at the top of the circle helped them reclaim the lead by just one point.

Prior to that, just one behind in each quarter was indicative of the attritional nature of the play.

Bethany Pinchin on the halfback flank for Queensland was instrumental in shutting down the attacking flair of the Vic Metro side.

Ably assisted by Shannon Campbell in fullback and Tayla Harris in the ruck, the Queensland side put in a performance that has their championships potential with a remarkable display of defence.

Vic Metro, despite being largely stifled by Queensland for the first three quarters, put in a tenacious display that is characteristic of the side, who have won all four tournaments to date.

Kayla Moore was a standout, playing an intelligent game and leading by example across the field. Lone goalkicker Isabel Huntington was unlucky not to convert more opportunities in the early stages of the game.