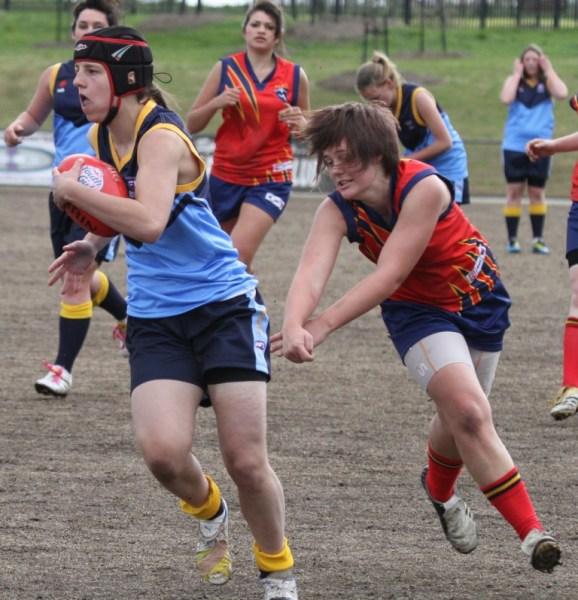 The new look team has only four girls from the 2010 team with many girls being unavailable including Under 18 All-Australian and 2011 Sunfire player Breanna Koenen.

“It’s a pretty inexperienced and young team we have for these Championships, especially without the experience of Bre Koenen and Emily Wastle, however most of the girls have been playing club football for the past 5 years and have some amazing skills” says AFL Qld Female Participation Coordinator Julia Price.

“It’s a hard one to say how they’ll go as they keep getting better and better each week at training and its difficult to find fault with them.  It will be interesting when the other half of the team from Capricornia, Wide Bay and Cairns arrive to see how the all play together.  In fact it will be exciting!” say Price.

This is only the 2nd year there has been an Under 18 Youth Girls National Championships with the Inaugural one being played in Melbourne and won by Victoria.  Qld finished a commendable third but started off their campaign slowly to be not eligible for the finals.  They will be looking at improving on that result in their home state.

Qld have the bye first up on Tuesday but will play WA on Wednesday at 12.30pm and ACT/NSW on Thursday also at 12.30pm. All games will be played at Southport AFC.

Friday will see crossover pool finals followed by all the Finals on Saturday.

AFL Qld will also be hosting an information session for anyone interested in getting involved as a player, coach, umpire or just supporter of Women’s & Youth girls Football on the Gold Coast.   This will be held on Saturday 24 September at 1.30pm at Southport AFC in the Medallion Room.  All welcome!

To keep in touch with scores and stories, either visit the official website at aflfemalechamps.com.au