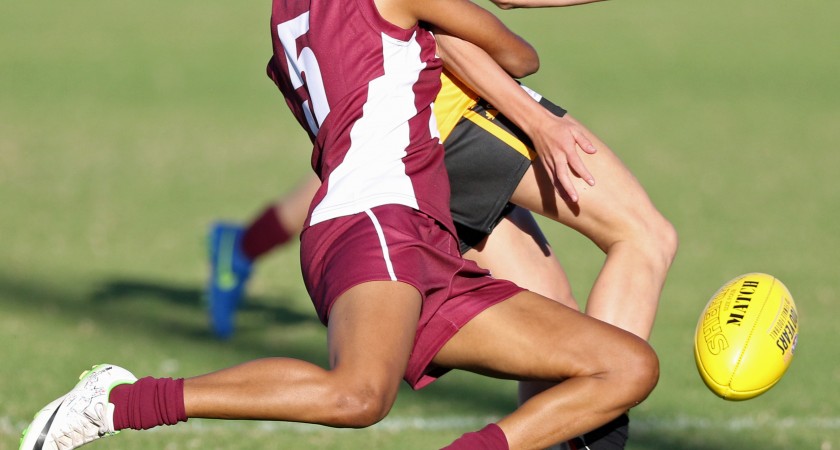 Queensland kicked the first three goals of the game to get off to a strong start and with Melbourne Demons women’s AFL player Tayla Harris dominating the game at centre half-back they went on to record the strong 6.9 (45) to 2.2 (14).

WA are the defending champions from last year, but have lost 16 players from that team and now have lost their opening two matches of the 2015 championship after also going down to Vic Metro on Monday while Queensland also recorded a strong win over Vic Country on Day 1 by 22 points.

Tayla Harris dominated the game across centre half-back for Queensland with her reading of the play, and then ability to take strong overhead marks outstanding. She then used the ball well to set up to play coming out of the defensive half.

Queensland started the game on fire and Howarth kicked her first goal after just four minutes, and then a minute later Jade Ransfield added another for the Maroons.

By the time Ransfield added Queensland’s third, and her second, at the nine-minute mark, WA had yet to score but the hosts did get on the board just before quarter-time with a goal to Beatrice Devlyn.

Queensland still led by 17 points at the first change and then went 24 points up when Howarth added another goal to continue her strong game.

Despite having the advantage of the breeze, WA didn’t in the second quarter and Queensland led by 25 points at the main break.

Elisha King then kicked a good goal to start the third quarter to open up a 31-point advantage.

Samantha Garlett did manage to kick a goal for WA in the third term, but the only goal for the rest of the game came just 30 seconds into the final term courtesy of Shaliese Law and Queensland went on to record the 31-point win.

WA’s carnival will now continue against the also winless Vic Country on Thursday while Queensland will take on the also unbeaten Vic Metro in what will be a Grand Final preview for Friday.

Queensland will take a well earned rest day before they line up against Vic Metro on Thursday at 2:15pm Brisbane time.

Catch all the action via  live stream https://aflq.com.au/youth-girls-national-championships/