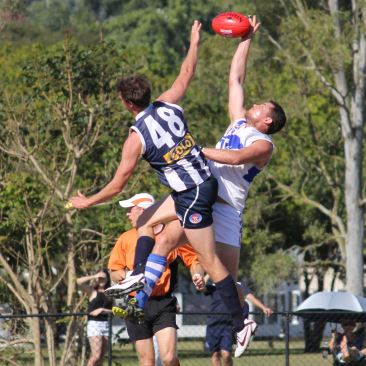 The Queensland Football Association (QFA) competitions kick off this weekend.

The QFA, consisting of a North and South competition, underpins the QAFL, following a major community football restructure for the 2014 season.

In the North, Caboolture plays its first premiership match at its new Burpengary home, against competition frontrunners, Mayne, who were in the finals mix in last year’s Division One competition.

On the Sunshine Coast, Caloundra revives a local rivalry when it hosts Maroochydore, who will be keen to improve after a tough 2013.

Noosa will be looking to re-establish their powerhouse reputation, after a lean year in  Division One last year, facing off against Nambour at Palmwoods.

It’s a first up local derby for fierce rivals Aspley and Kedron, who kick off their season with a twilight match, played as a curtain-closer to Aspley’s NEAFL match, starting at 5pm.

In the South competition, Burleigh will be searching for its first win in 12 months, when the Bombers take on Alexandra Hills at Bill Godfrey Oval.

Coomera faces a baptism of fire into the QFA South, after moving up from Division three last year, playing 2013 Division One grand finalists Springwood, at Coomera.

Kenmore also has s litmus test in its first round match, playing heavyweights Coorparoo Kings, who are searching for a fourth straight premiership in 2014, at Western Districts Oval.

The Robina Roos are looking to bounce back from their 2013 grand final defeat, as they face Coolangatta for the first times since 2000.

Yeronga South Brisbane has to wait one more week before getting underway, with a first-up bye.