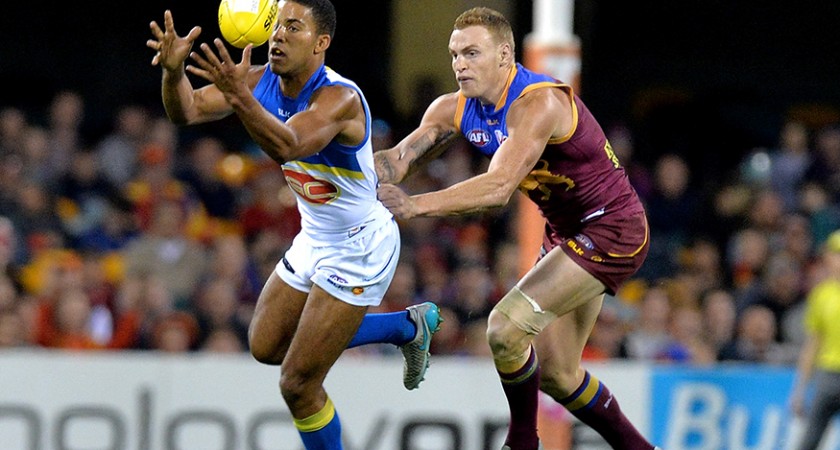 Ex-Cairns junior Jarrod Harbrow is set to stand alone as the great survivor of QClash football when the Brisbane Lions host the Gold Coast SUNS at the Gabba on Saturday.

It will be the 11th meeting between the two Queensland AFL clubs.

Harbrow, one of the most unheralded but dependable members of the Queensland AFL ‘family” and needing three games to be the Suns’ first 100-gamer, is one of four players to have played in each of the first 10.

But with ex-Brisbane captain Jed Adcock having moved on, current Brisbane captain Tom Rockliff on the injured list, and Suns teammate Matt Shaw seemingly out of favour with the selectors, Harbrow is on track to be the last ‘survivor’ from QClash1 in 2011.

Harbrow and the Suns have a 4-6 win/loss record overall in the QClash but have won three of the last four meetings between the sides.

And after an unbeaten start to the season they are hot favorites to add another ‘W’ to the list against the win-less Lions in Saturday’s 4.35pm twilight clash.

Regardless of form, though, the only real certainty about QClash football is uncertainty.

Since Lion turned Sun Jared Brennan had 30 possessions (21 contested possessions) and 14 clearances to pilot Gold Coast to an eight-point win at the Gabba in QClash1 in 2011 it’s been an unpredictable and often volatile contest.

Indeed, the lead-up to QClash 1 was explosive as the teams had traded insults in the media pre-match. Lions Brownlow Medalist Simon Black branded ex-teammates Brennan and Michael Rischitelli ‘mercenaries’ and took a swipe at the Suns’ AFL concessions , while Lions skipper Jonathan Brown said it was ‘personal’ because the Lions always stood to lose from the Suns’ inclusion, and Suns coach Guy McKenna said the Suns were “here to clean up the Brisbane Bears’ mess”.

Since then there has been a special rivalry which, if nothing else, carries much-wanted bragging rights at least until the next time the teams meet.

Momentum changed in QClash7 at Metricon when the Suns started favorites for the first time in Justin Leppitsch’s first local derby as Brisbane coach in Round 3 2014. The home side duly saluted by 53 points as skipper Gary Ablett won his second Marcus Ashcroft Medal, awarded to the player judged best afield.

Leppitsch had his revenge later that season, winning the return bout by 54 points, but Suns counterpart Rodney Eade enjoyed a 2-0 QClash record in his first season at the Gold Coast helm last year despite winning only four games overall. They won by 64 points and 14 points.

Overall, it’s 4-2 to the Lions at the Gabba, remembering that both QClashes were played in the State capital in 2011 while Metricon Stadium was being finished, and it’s 2-2 at the redeveloped former home of the Brisbane Bears on the Gold Coast.

Over 10 QClashes the Lions have fielded 62 players and the Suns 57.

Rising Suns superstar Tom Lynch made his AFL debut in QClash1 in front of 25,504 people at the Gabba alongside teammates Sam Day, Joey Daye and Lion Bryce Retzlaff.

Brisbane’s Harris Andrews, 142 days beyond his 18th birthday when he played his third AFL game in QClash9, is the youngest ever QClash player. The Suns’ youngest has been David Swallow at 18 years 169 days in QClash1.

Brisbane’s Ben Hudson, who was 33 years 149 days old in QClash4, is the oldest ever QClash player. Gold Coast’s oldest has been Nick Malceski at 30 years 358 days in QClash10.

Ablett’s 38-37 possession double has been bettered only twice in QClash history – in the same game – when Brisbane pair Rockliff (47) and Hanley (45) went on a rampage in a nine-goal Gabba in QClash8 in 2014.

Ex-Lions veteran Ash Grath, now retired, and ex-Sun Dixon, now at Port Adelaide, share the distinction of kicking most goals in a QClash. McGrath kicked six in a losing effort in QClash1, and Dixon bagged six with a medal-winning performance in QClash9 last year. Players with five-goal hauls in a QClash have been ex-Sun Nathan Krakouer (QC1), Brown (QC5) and Lynch (QC10).