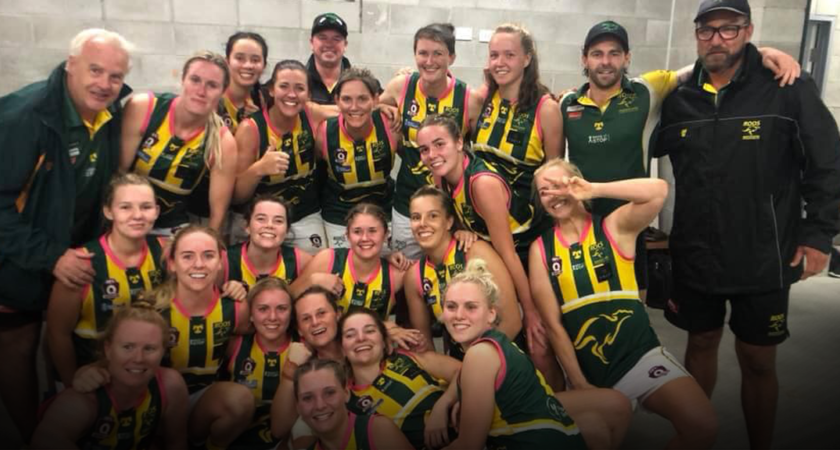 Coolangatta hit the break undefeated after 70-point drubbing of UQ

Coolangatta Tweed have emerged as the early favourites after two rounds of QAFLW action with an emphatic 70-point rout of University of Queensland.

The Bluebirds made light work of the Red Lions to earn top spot on the ladder having conceded just 20 points across the opening two rounds of the season.

The win comes following Coolangatta coach Matt Bedford’s proclamation of entering the league-wide bye week across Easter with an undefeated record as one of only two teams in the competition to do just that.

Following the win, Bedford said the team orientated defence and strength of the back five were a driving factor in the team’s undefeated start.

“The back five are a big reason the whole team is going really well. They know where to be, we’re not relying on one person to hold us together, it’s five or six girls all knowing what their role is on the day,” Bedford said.

“The win didn’t happen as a fluke, it happened because everyone in the team played to what they had to do. They could see the plan, when it works it works really well for us.”

Red Lions midfielder Megan Hunt kicked off the game just two minutes into the fray in what would be the side’s only major of the game.

But just as it appeared the result may have been following a similar path to the two side’s Semi Final showdown last August, Coolangatta responded with two late goals enough to steal the lead at the first break.

The six-point deficit – the slimmest margin between the two sides at any break – would last less than two minutes as the Bluebirds’ third major sailed through.

Coolangatta’s forward pressure continued throughout the second term as they continued to pile on the goals.

Ultimately, the win came win a run of five answered majors in the second term that handed the home side a six-goal lead at the main break.

The second half followed a similar narrative with the Bluebirds booting three goals in the third and two more in the fourth to ice the game.

Their stingy defence, which rendered the Red Lions scoreless after Hunt’s initial major meant the Bluebirds stormed home to the tune of 12 straight goals.

Two late goals from Maroochydore pair Kate Surman and Jesse Sills have guided the Roos to their first QAFLW win in nearly a year in a thrilling nine-point affair against Wilston Grange at Hickey Park.

Prior to the drought breaking win, Maroochydore had produced just one win in their past 16 contests, with their most recent win occurring a full 364 days prior in Round 1 of 2018.

But after finding themselves down by nine-points at three quarter time, Maroochydore willed their way to victory through goals to Surman and Sills; both in the second half of the quarter.

Surman, who had been perhaps the Roos’ best player across the past 12 months, handed the away side the lead late in the final term when she strolled into an open goal before Sills iced the game in similar fashion with just over two minutes remaining.

After unveiling their premiership flag before the game, Wilston Grange got the fast start in the contest but were instantly matched by the visiting Roos, who found themselves in the lead at the first break.

Their two-point buffer was reeled back in as Gorillas livewire booted the first goal of the second inside four minutes before the two sides traded majors before halftime.

Just one goal was scored throughout the term – a Catherine Svarc set-shot, but it appeared hope had been lost for the Roos, who mustered just one behind.

A second straight win has helped Yeronga to the top end of the QAFLW ladder after the Devils’ four quarter effort accounted for the Hornets.

Just three players hit the scoreboard for the Devils yet that remained enough to steer clear of the Hornets in the 22-point win.

Yeronga’s 2-0 start to the season equals their formidable 2016 campaign where they lost just two games all season and made a Grand Final.

Ransfield, who has now booted 137 goals for the Devils in 76 games, kicked off the game with her first major inside the first two minutes before extending the away side’s lead out to 18 with two more.

Aspley began the second term with a bang and produced the first handful of scoring opportunities.

Despite their best efforts however, the Hornets were unable to trouble the margin and instead it was Yeronga, through their midfield group who willed their way around the stoppages, who kicked ahead.

The Devils extended their lead through Virgo, who was seemingly everywhere in the term before McDonnell put a dagger through the Hornets heart with another before the break.

With the margin now teetering around the four goal mark, Yeronga were pole position for victory as the far more accurate and opportunistic side.

Campbell booted her second as the lone major for the third before Virgo and McDonnell, both kicking their second of the game, put the result beyond doubt in the fourth.

A four goal blitz in a dominant third quarter has helped return Bond University to the winners list for the first time in season 2019.

The Bullsharks, who held an 18-point lead as the two teams parted for the main break in large due to the efforts of Kalinda Howarth inside 50, put the result beyond doubt in the third as the team booted four goals to one before three quarter time.

Kate Reynolds took just one minute to kick the away side’s first goal in the game-winning 20 minutes after she marked 20m out from goal following a Bullsharks clearance to open the term.

Her major was soon followed by further goals to Georgia Brehmer, Amanda Berry and Shannon Danckert that handed the Gold Coast side a comfortable 38-point lead as the two sides headed into the main break.

Berry’s second major in the fourth was merely the icing on the cake as Bond University held Coorparoo goalless after the break.

Tasmin Smith again was creative around the stoppages and out wide for the Bullsharks while Berry’s outside speed also provided the side with plenty of run and carry along with her two goals.

The loss means Coorparoo, often among the top sides in the competition, has slumped to its second straight defeat as they languish on the bottom of the QAFLW standings.