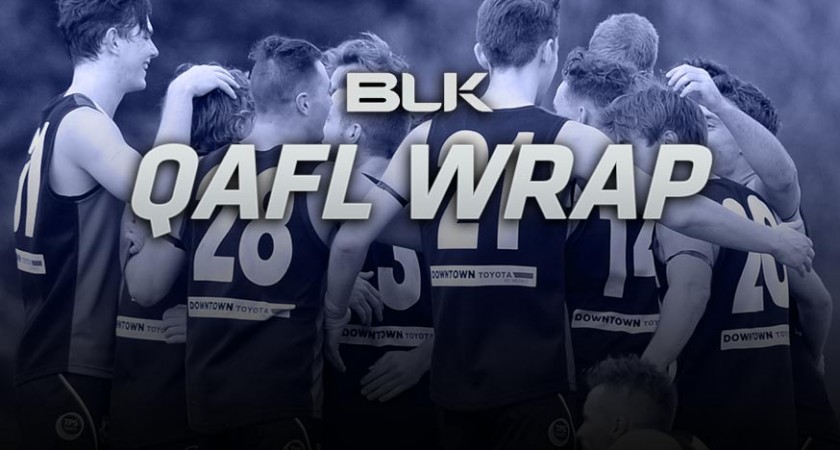 There is something about Broadbeach in the run home. They turn into giant killers.

Last year they were the first team to beat Labrador, and then knocked off Morningside with two rounds to go.

Now, they have put Palm Beach’s top spot in jeopardy.

They came from the clouds to do it. Half way through the second quarter, in slippery conditions they five goals down.

Really, in those conditions, there should have been no coming back.

But Palm Beach started to shoot themselves in the foot, and Broadbeach got up and about.

The Cats came out after half time with the confidence of a premiership wining team.

Askey kicked the first, but the Cats went on to kick the last four of the quarter, including a couple to Kerr.

Trailing by nine-points at the last change, the Lions had to steady the ship, and put the four points in the bag.

The Cats were swooping on mistakes, like a couple of errant switch kicks, and out pressuring the Lions.

Kerr kicked the first, and Kennedy’s goal gave them the lead 18 minutes in.

When Kerr kicked his sixth at the 21 minute mark, it was lights out.

Searl, Chadwick and Nutting were the ones who got them going, but the reality was it was 22 young guys playing without fear, and with their tails up.

That’s dangerous against any opposition.

“That was ordinary. Very ordinary.

“We had a good enough side, had a big lead, we should have won that.

“They got excited, being a young side, got on top, and once they believed they could win we couldn’t stop them.

“We had guys going for miracle switch kicks in the wet which cost us.

“It was a really disappointing, terrible finish.

“We had a crack, and we played four quarters for once, probably for the third time this year.

“They were really, really good. We had winners all over the park for once.

“I said to them at half time, we are not going to kick six goals in this quarter, we have got to outscore them by a couple in the third, and then come home with the wind in the last.

“Our pressure went up, it was a tug of war for 25 minutes, and we got away with it.”

It was billed as one of the biggest games of the year to date. It delivered.

Apart from a 20-minute period in the second quarter and third quarter, it was as tight Andrew Bogut trying to fit in his single bed in the Olympic village at the moment.

Morningside settled the quickest. Bisset was looking dangerous and their midfield group was transitioning well.

There wasn’t a whole deal in it, until Mt Gravatt broke the shackles either side of the main break.

Green kicked four, and the Murphy brothers chimed in for one each, to turn a 12-point deficit into a 27-point advantage.

They were transitioning quickly, getting it on the outside, and their tackling pressure was through the roof.

Oh, and there were two blokes by the name of Mick Hamill and Joe Murphy who brought their own footy.

Going into the last, Morningside were still in it, but Troy Moncur’s two early goals, pretty much on one leg due to a busted ankle, nearly sealed the deal,

The Panthers emptied the tank in the last five, but it wasn’t to be.
With heavy hearts on Ferg Reid day, as Josh Vearing played game 200, Jesse Green 100, and Will Hamill 50, they weren’t letting this slip.
Now they are in the box seat for finals, while Morningside and Surfers look to fight it out for sixth.
Coaches thoughts:
Brad Pollock – Mt Gravatt

“Half way through the second quarter, we had them. Everything we asked them to do before the game, we did.
“That eight-minute window where they kicked three goals killed us. It’s so hard to come back from that when you’re in a dogfight with a good team.

“It was two arm wrestlers going for it, neither team could really get it on their terms.
“We played well enough to win today, but we didn’t. We can’t dwell on it, we have got to move on.”

Surfers Paradise not only stepped back into the five this week, they did it in emphatic fashion.

They weren’t just looking for a win, that wouldn’t cut it if they want to play finals, they wanted a percentage booster.

That’s exactly what they got, adding 5 points to their tally.

This one had blow out written all over it from the first quarter.

The Demons smelt blood in the water, kicking 10 unanswered goals in the first 30 minutes.

10… and Daniel Green had six of those.

They then kicked the next six of the game, before the Gorillas finally opened their account in the third.
Grange stopped the bleeding a bit in the second half but the damage was done early when Surfers ran in numbers.

As soon as they won they ball, they all took off. Everyone charged forward.

It’s intimidating when in full flight.

Wilston Grange fought out the last half an hour to at least even out the quarter, but Surfers still romped home to a 76-point win.

Green finished with seven, after Gaw went to him in a lock down roll, and Moffa and Matt Green were on song.

Molan battled hard all day, as did McFadyen but they didn’t have enough mates.

Surfers are back up and about.

“It was a good start, we thought the win was going to be more than it was.

“We were keen to start well, we knew how important that was in terms of percentage.

“Our forwards were on top, looking really dangerous, and we controlled the game through the midfield.

“They had a crack, they had some kids playing like we did, but when they threw those extras behind the ball it turned into a bit of an ugly game.

“Our spread from the back half and our switch of play was really good.”

“We were poor for a half. I thought we finished off okay though.

“We put a couple more behind the ball when they had the wind. They were smashing us streaming forward, so we had to mix it up in the second half.

“They won a lot of contested ball early, and then we didn’t capitalise when we had the breeze.”

Clinical.
That’s how Bomber Adams described Labrador’s performance yesterday, as they continue to peak at the right time of the year.

Conditions were tricky, the breeze was playing a part, but the Tigers were moving the ball from one end to the other as slick as an oil spill.

Clarke was doing what he wanted in the middle, gaining a ton of meters, while Baxter kicked nine, and Retzlaff kicked six.

Oh, and Wayde Mills was doing his thing across half back….again.

The Tigers were purring, extending their lead at every break, before storming home to an 85-point win.

Sandgate battled hard, they didn’t roll over, but they just couldn’t go with Labrador’s stars.

Overington won his fair share, and Corvo was very good for them.

Labrador’s win, and percentage boost, probably didn’t mean as much at the final siren as it did an hour later, when Palm Beach got rolled by Broadbeach,

Now, if they win next week, it sets them up for a crack at the minor premiership in the final round.

All to play for.

“The week before, we had a few down with the flu and that, but this week, and what you look for as a coach, is that everyone contributed.

“With your key forwards, one kicks nine, one kicks six, and Coombe still pops up and kicks three.

“We put a few to bed to be honest at the end, but our second tier and third tier players really made sure of the results and finished well.

“We are not looking past next week, we can’t because they beat Palm Beach this week, and have beaten us the last two years, so it’s a huge challenge.

“We know if we win the next two we finish on top, lose both finish fifth. Simple as that.”

“They are as good of a side as I have seen in the competition, gee they played well.

“They were clinical yesterday.

“Their forwards are very good, and then to have someone like Mills across half back is good artillery.

“With our kids, it’s hard to compete with seniors bodies like that.
“I told my blokes we have got to learn from that experience. They are the very best, and when you play them, you have to learn from them.”

The Western Magpies took another step towards a top three finish, and a possible minor premiership yesterday, with a convincing win over UQ.

A depleted UQ had a crack, they never threw in the white towel, but they were no match for one of the QAFL powerhouses.

The Magpies controlled the tempo early, to head into quarter time 23-points up.

The second turned into a shootout. While UQ didn’t win the quarter, they played the brand of footy they wanted to.
Open, fast, loading up out wide, it’s the game style that suits them best, and on Field 9, it turned into a goal fest.

It was a six goal to nine quarter in the Magpies favour.

The Magpies weren’t happy with that though, it’s not the brand they pride themselves on.

They made sure the second half was played through their numbers, and made UQ work in the middle.

From that point, they kicked away to a 78-point win.

Dickfos and Pope had 13 majors between them, while Sondergold and Jaekne-Cain were bulls around the footy.

Begley and Powey battled hard all day, and Macanawai cracked in, in the middle, which we have come to expect.

Big game coming up next week against Morningside now for the Magpies.

“We were down on numbers, the boys battled hard all day, but they are a very good team.

“They are pretty clinical now. They have got some really good structures, move it well, and know where they need to be.

“We were a bit slow to react at times, and they pulled a few on us, but they way we played, I was fairly happy considering the guys we had one the park.
“I was happy with the effort, I don’t think the scoreboard reflected the game, they were a better side no doubt, but we didn’t get rewarded for effort at times.”

“The thing about the comp is there is no easy game, and the score didn’t do UQ justice, but it was a good day.

“They were depleted, we had a few down as well, but they tested us out in their own way.

“I’m never comfortable, so it wasn’t until very late in the game we could relax a little bit.

“The nine goal to six second quarter made me uncomfortable. It became a bit freewheeling, and that’s not what we wanted to happen, or how we wanted them to play.”