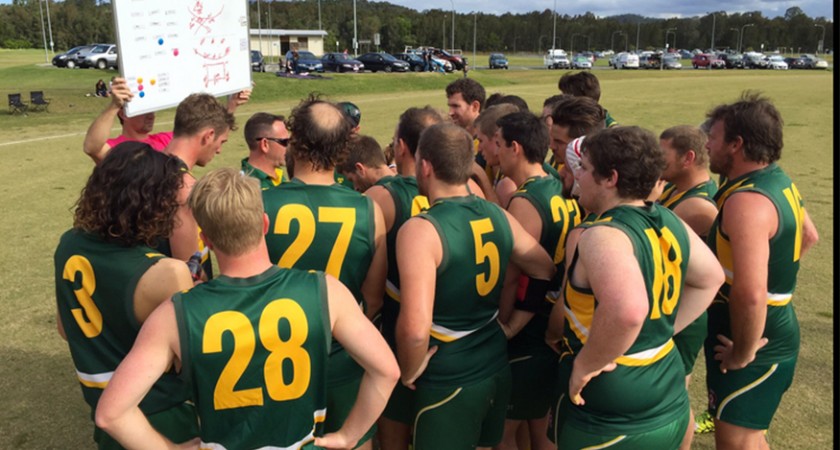 We knew they would be stronger over the ball, and they made sure they capitalised.

Jimboomba didn’t really give Collingwood Park a look in on Friday night.

The tone was set early when the Redbacks kicked six unanswered first quarter goals, which included three to Tomlinson.

From there, it was one-way traffic. Jimboomba extended their lead at every break, before romping home to a 115-point win.

Martin kicked seven, and Tomlinson finished with six, in a game where the Redbacks put the rest of the competition on notice.

They left their run late, but the Woodsmen live to fight another day.
After trailing at every break, they booted four goals to one in the last 20 minutes to squeeze over the line by 11-points.

They were up against it early though. Sandgate jumped out of the blocks the better, piling on five goals in the first quarter.

It was a lead they pretty much held through to the last break, in a game that was rough and tough in the middle.

But the Woodsmen held their nerve, backed the system that has taken them to the last two grand finals in, and skipped away.

Thompson booted five, which was over a quarter of the entire goals scored in the game, and Curtis had it on a string for the Woodsmen.

Pattinson and Claydon were the catalysts for Sandgate’s lead, but they couldn’t drag the Hawks over the line.

The Woodsmen take on Jimboomba this Friday night.

Pomona have booked a date in the big dance thanks to a comfortable win over Gympie.

The work was done early. They rolled up their sleeves in the first half, opening up a 41-point advantage by the main break.

They were on top in the middle, and their forwards were getting a real good look at the sticks.

From there, they could really control the tempo of the game and make sure of the victory.

A six-goal to two second half put the game to bed, and booked Pomona a grand final ticket.

Townsend was the star for Pomona, as he has done for most of the year. He has one more job to do though.

Cross and Kent battled hard for Gympie, but it wasn’t to be. Now their attention turns to Maroochydore this weekend.

It was nearly the upset of the season, but Maroochydore held their nerve to get the job done.

Nambour may not have won a game this year, but they certainly didn’t play like that in the first half.

They were more than up for the fight, and if it wasn’t for some wayward kicking in front of goal, could have really put the foot down.

They had seven extra scoring shots in the first quarter, but only went into the break 17-points up.

The second quarter was when Maroochydore made their move, bringing the margin back within a point at the long break.

From there, without setting the world on fire, they were able to shake off a gallant Nambour to the tune of 16-points.

With that, they face Gympie in a prelim final this Saturday.