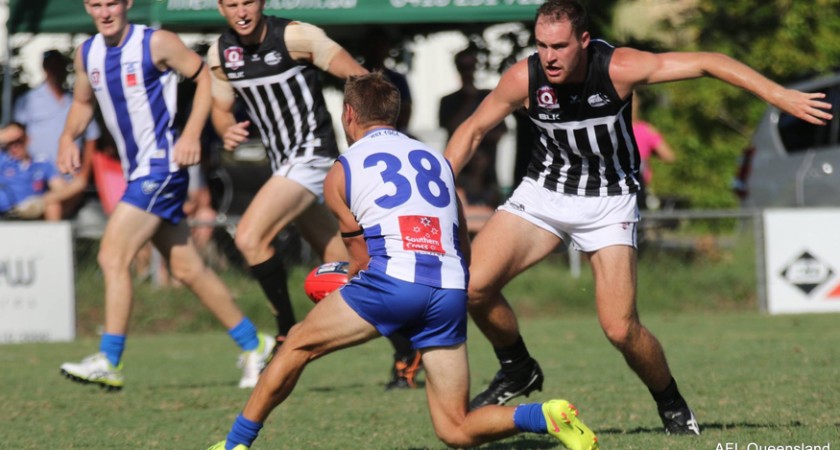 The 2016 QAFL season  is one month down, and the bye week is upon us, so what have we learnt about each club?

Andrew Wiles has taken a look at each clubs first four games, where they sit, and what the rest of the year might look like below.

The only undefeated team in the competition, but there have been a couple of scares along the way. The Panthers best win was no doubt knocking off Labrador in round 3, something they couldn’t do all last year.

When they have played their best footy, it’s as smooth as silk.

Abey hasn’t had his best start to the year, but still brings it to ground, and takes the best defender, which frees up blokes like Mueller and Mitchell.

Russ, Kinch and Nash are still going to be their most prominent ball winners, but the younger guys like Threapleton and Wearne look like they are the next wave coming though. Expect to see the red white and black deep into finals again; will they ever slide?

The Lions have, so far, backed up their pre-season hype. With a busy off-season, there were a lot of eyes on Palm Beach in the first month to see where they fit in this year. The answer is a contender.

In reality, they should be 4-0, but failed to close out the game late against Morningside.

Jon Croad is a star, Douglas is capable of kicking a bag each week, and their youngsters like Lys and Stubbs are going to be so important this year, and for many years to come.

They play an attractive brand of footy, which will take them a long way when the whips are cracking. If they can keep the game flowing, not many teams will beat them.

I guarantee if you asked Brad Pollock pre-season if he would take a 3-1 start to the year, he would have jumped at it.  They have probably been the surprise packet of 2016 so far, but internally, they always had great confidence in the group, especially with blokes like Joe Murphy returning from injury.

They have already showed they are one of the most dangerous teams in transition. Their running game has been elite, but the Vultures have also controlled the stoppages when needed.

Their spine with the likes of Tronc, Smith, Murphy, Carbone, and Estall will be tough to stop.

It’s been an up and down first month for the Gorillas. There good has been good, but their bad has left them scratching their heads.

The year started off unbelievably when they knocked off the reigning premier, but they fell flat the next week against the Magpies. Blooding young kids means there is always going to be inconsistency in the performance early, but they have showed their best is still good enough. They are still going to be tough around the footy, but can hurt teams on the outside as well.

A fit Steve Brittain is a dangerous Steve Brittain, but their improvement will come from the output of kids like Lliam Molan and Lachie Nixon-Smith.

If they play four quarters, the sky is the limit. Fraser Pope has given them even more inside grunt work, the Haberfield brothers are linking up superbly, and Danny Green is dominating the forward 50.

Their only really issue this year has been their second half-fade outs. Eradicate them, and they will push any team in the comp.

Definitely one to watch out for as the season progresses.

Definitely hasn’t been the start they were looking for, or expected to make, but all is not lost yet. The Magpies showed what they are capable of against Wilston Grange in round 2, it was the brand of football they pride themselves on.

They let one slip last week against Broadbeach, and while that will sting for a long time, in patches they played some good footy.

Luke Scott has definitely still got it, and new recruit Nick Barling is more than handy. They will bounce back.

I think we could be looking back at the Cats’ win last week thinking, yep, that’s where their season truly began.

That’s not to say they have been rubbish so far, but it’s moments like coming back from four goals down ten minutes into the final quarter and winning that change the outlook of a season.

They will continue to find the right mix with the kids they have, and what position suits them best. They love to get the ball out wide from the back half, and run it down the flanks, which will suit them on the big grounds this year.

Palmer is developing very nicely in the ruck, Royes is a match winner, and Fitzsimmons will be one to watch.

Injuries have savaged the Tigers line up this year, with 25 players not available for selection last week.

The wheels haven’t been turning perfectly just yet, especially when you take a few big names out each week. They are on the back foot, but the list that have means it won’t take much to turn around.

They weren’t happy with the output against Grange in week one, but showed they are still capable of putting teams to the sword the next week against UQ.

The week off has come at a very good time for the Tigers, lets see how they respond with a few superstars back in the lineup next week.

The first three weeks were a bit of a tease for Sandgate fans. The pre-season promised a lot, but the Hawks just lacked polish in the first fortnight especially.

It all came together last weekend though. When Sandgate are on, they are ferocious at the footy, hunt in packs, and are contested ball kings.

A lot of brotherly love is around the Hawks nest. Liam and Aden Rutledge are stars, but their future lies in Connor and Cody Stackelberg, who are both absolute jets.

Luck hasn’t been on their side so far this year, but they definitely turned a corner last week.

They struggled to stay in the contest for four quarters from rounds one to three, but showed in glimpses their running game is strong.

If they took their opportunities in front of the sticks they would be sitting a 1-3 right now, which looks a lot prettier.

Despite some selection headaches with those injuries, the shining light this year has been the continued growth of Harry Milford and John Macanawai, who belong in the QAFL despite being so young.

Add that to the experience of Phil Lovett, Gareth Begley and Sean Powyer, and they no doubt take a few scalps.