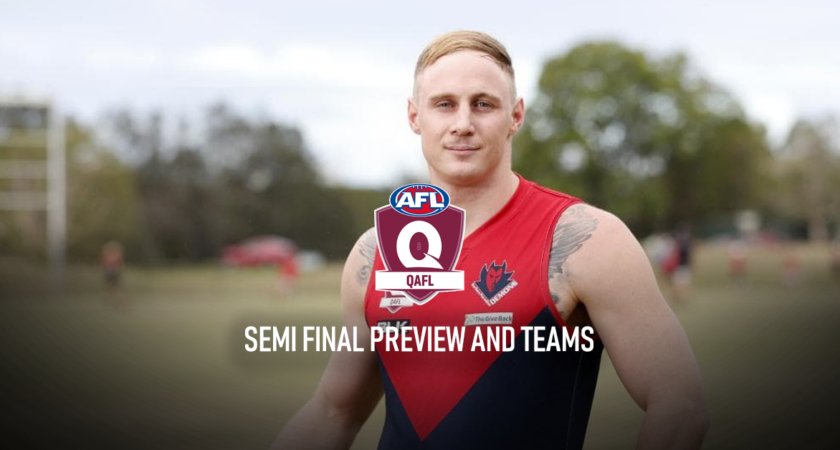 Round 6: Palm Beach Currumbin 20.10 (130) d Surfers Paradise 6.7 (43) at Salk Oval. Jack Anthony kicked six for the Lions who dominated the game except for the second quarter. Curtis Marsden and Anthony were best for PBC and Jack Prestegar was best for the Demons.
Round 18: Surfers Paradise 13.11 (89) d Palm Beach Currumbin 3.7 (25) at Sir Bruce Small Park. This was the one that shattered the theory that the Lions were  invincible. The Demons simply destroyed the previously unbeaten premiers. Josh Matulis and Dan Green (five goals) starred for the Demons.

ACCORDING TO THE COACHES:

Jess Sinclair: Their grunt around the footy, that’s obviously their strength. They can be dominant off half-back and they have some really good rebounders.
Brad Moore: Palm Beach have talent all over the ground, they have quality players and have been the benchmark of the competition for a few years now.

And the reward for the defender’s many years of loyal service to the club is to be matched up against arguably the most feared attacker in the competition in big Jack Anthony.

Surfers coach Brad Moore confirmed the much-anticipated head-to-head when the sides clash in a huge Gold Coast derby at Salk Oval on Saturday where the winner earns a place in the grand final.
But taking on ‘Big Jack’ is a challenge Haberfield is looking forward to.

“I’ve obviously played on some quality footballers in my time and Jack is definitely up there among the best, if not the best,” said Haberfield.

Of course Anthony has to take the field for the match-up to happen, remembering the former Collingwood and Fremantle AFL player has not been seen since the seventh round when he injured an ankle.

Anthony kicked six for the Lions when they trounced Surfers by 87 points at Salk Oval early this season but has not since been selected to build on his 41 goals after seven rounds.

Haberfield is one of three brothers to have played for the Demons. His siblings are oldest Jesse and youngest Cassidy.

Haberfield was best and fairest for Surfers in 2017, he has been captain of the club for three years and was this year captain of the Queensland representative side.

“It’s a fantastic achievement considering that he is only 25 years old,” said Moore.

Personal milestones aside, this is a clash between two form sides at a venue where Surfers won last season for the first time in two decades.

And an interesting stat is that PBC have lost only twice in their last 21 games – both to Surfers, who also beat the Lions by 89-25 at Sir Bruce Small Park in round 18 this year.

The derby matches two super midfields and both Moore and PBC’s Jess Sinclair agree this is where Saturday’s derby will be won.

PBC pulled off a surprise at selection time, away from bringing Anthony back, when they included 2017 premiership defender Dirk Koenen, who has been playing NEAFL with the Gold Coast Suns this year.

Another Suns NEAFL performer in Cooper Portelli, ex-Labrador, has also been named in the side as Dale Neuhaus, Harry Hulls and Trent Stubbs (Southport) were left out.

There were no such selection issues at Surfers, who go into the clash with an unchanged side that beat Morningside in the qualifying final last weekend.

This means the Demons will again go in with a makeshift ruck group of Thompson Smith, Sam Jewell and Matt Green.

There will be plenty of heat in the kitchen, the midfield, where both sides excel with quality players who like to move the ball quickly.

The winners advance straight into the Metricon Stadium grand final in a fortnight while the losers live to fight another day in the preliminary final next weekend against the winner of Sunday’s first semi-final between Morningside and Broadbeach.

HEAD TO HEAD THIS YEAR:

Round 7: Morningside 17.11 (113) d Broadbeach 9.9 (63) at Jack Esplen Oval. Scores were level at half-time then the Panthers pounced and strangled the Cats, who kicked only two goals after the big break. Peter Mollison kicked four for the Panthers and Luke Rogerson and Brad Howard were best.
Round 16: Broadbeach 13.11 (89) d Morningside 5.12 (42) at Subaru Oval. It was one point the diff at half-time and 21 points at three-quarter time before the Cats ran riot. Jason Cloke kicked five for the home side against a flat Panther unit.

ACCORDING TO THE COACHES:

Clint Watts: It looks like Broadbeach are going in smaller up front without Matt Fowler and I believe Jake Hinds from Southport is their X-factor.
Beau Zorko: I believe Morningside’s strength lies with arguably the best ruck combination in the competition as well as Henry Joyce, who has been playing so well in the centre.

It has to be the home-ground advantage thing because the weekend’s first semi-final opponents Morningside and Broadbeach have smashed each other this season.

It is intriguing to look at results between the Panthers and the Cats because, in both instances, the home sides have trounced the visitors, starting with round seven at Jack Esplen Oval, scene of the knockout semi-final on Sunday.

Morningside took that fixture by 17.11 to 9.9 after scores were level at half-time.

Then the return bout on the Gold Coast, at Subaru Oval, went the way of the Cats, by 13.11 to 5.2 after there was only a point in it at half-time.

Figures like these suggest that Morningside will start favourites, simply on the basis that they are at home. And it has not gone unnoticed that Broadbeach coach Beau Zorko feels the Panthers are a six goals better side on their home turf.

That is fair argument because the Panthers have lost heavily in their last two appearances on bigger Gold Coast grounds – last weekend against Surfers and that one against the Cags in round 16.

It was that match that exposed a glaring lack of forward firepower at Morningside.

Stats showed that despite a commanding advantage in uncontested marks around the ground the Panthers managed only four marks inside their 50m arc for the entire match.

No doubt that is an area of concern for coach Clint Watts, although last weekend’s qualifying final disaster, when Surfers swamped them in the first quarter, is the coach’s major headache.

“I just don’t want another episode of quarter one last week,” Watts said of the 8.4 to 1.2 opening term at Sir Bruce Small Park.

“We’ve had a fairly honest review of that but it is fair to say that both teams this weekend understand it is last chance saloon.”

Broadbeach are coming off a thriller against Mt Gravatt in the elimination final,  which they won by three points.

Morningside have made four changes, all of them forced, while the Cats have two.

The Panthers lose aggressive on-baller Jimmy Rayner through suspension and Hiovake Livesey through injury whole Broadbeach are missing their captain Matt Fowler, whose troublesome calf has not come up.

The loser on Sunday goes into mothballs while the winner lives to fight another day in the preliminary final against either Palm Beach Currumbin or Surfers Paradise.