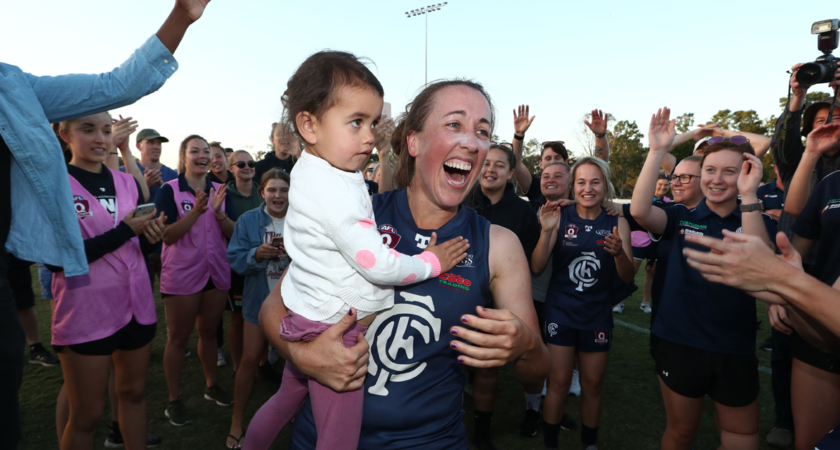 As the final siren for the 2019 QAFLW season rung at Leyshon Park on Sunday, a chorus erupted.

The crowd had gathered for the team but there was one player whose esteem permeated above all else.

It was just five minutes after the Kings had once again stood tall to win the QAFLW Premiership, the crowd engulfing the playing group, chanting the name of the team’s long-time leader and now Premiership Captain, Sally Young.

Young of course, instrumental in the success and longevity of the Kings’ program, now found herself at the centre of the club she held so dear, adorned by staff, teammates, supporters and members of the club’s senior men’s team.

Young was lost for words.

“It’s amazing, that was incredible I didn’t know what to say or do, I love them,” Young told aflq.com.au.

It can be said the feelings are mutual, as a sea of Coorparoo players and supporters cheered Young’s name in an overwhelming display of emotion post-match.

For the past two years the Grand Final has been the same; Coorparoo qualifying for the big dance before forced to watch on their opposition celebrated.

This year though, was different.

Coorparoo was out for retribution and they finally got it.

The Kings took down Bond University in a blitzkrieg opening term.

Young has been with the club since their establishment in 2013, and aside from her missing the 2017 season due to a torn ACL, she hasn’t missed a beat.

Sunday was no different as Young said this Grand Final stacked up as her “favourite” moment in her 84-game tenure with the club.

“They’ve come through and they’re now my teammates, the young guns coming through and also quite a few over 30s,” she said.

“This one is amazing, top of the table now.”

Having fallen short in the Grand Final over the past two seasons, it was fitting that their long-awaited triumph in the 2019 decider was followed by a club-wide adoration of one of their most loyal and respected figures.

Because after all, Young is Coorparoo and Coorparoo is Young.