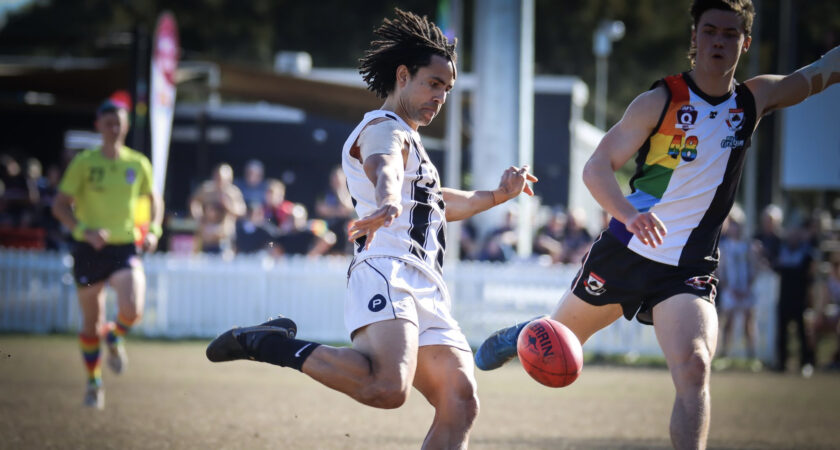 Talking Points
Did we finally see the best of Aaron Wilson?
Absolutely. Wilson has the capacity to be one of the must-watch attractions in this competition and to kick seven of the team’s 14 goals last week on the road to Maroochydore is the sort of performance that we all know he can deliver. As footy fans, we just hope that this is only the beginning as the Tigers from the North fight to play finals in 2022.

Tough day at the office for the Dees last week?
Aspley is a quality side, there is nothing doubting it but with the scores at 15 to 14 in  the first term, the Dees looked like it was genuinely going to compete. It then conceded 19 of the next 21 goals of the contest in a 109-point loss that should not have been there to begin with. There is so much good, local talent that have been with this list for a number of years, this list is better than what the result showed on the weekend.

What does the draw do for Noosa?
With Palm Beach (6th – 28 points), Maroochydore (26 points) and Wilston Grange (20 points) all mathematically capable playing finals, the draw was better than a loss and it keeps the Tigers clear. The other side of it is that a draw against the Roos makes it more challenging for them to make finals. Unlike its local rivals, a draw doesn’t harm them much at all.

Verdict
Noosa will be too strong at home. Victory here just about locks them in the top six and a win against either PBC or Wilston Grange in the next two weeks makes it a certainty and causes chaos with either one of those teams looking to make finals.

Talking Points
Josh Coombes must really like playing against the Panthers
Coombes was in a league of his own last week against Morningside when he kicked five goals. His previous outing, also against Morningside had him produce six goals under lights; taking his tally to 11 in the past two weeks and 20 on the board this season. The former Wynnum and Coorparoo junior is making a strong impression up forward in his second season under Adrian Fletcher and his best football is definitely ahead of him. Great leap, awesome in the contested marks and loves a goal.

Is Harry Milford a contender for the rising star in the QAFL in season 2022?
Harry is putting together a nice body of work for the Vultures this season. He started off the year with five goals against the Pies and has another haul of five to his name against the Demons. His three goals (out of seven) against the Lions last week was impressive. He will definitely contend for the award in a team where he has been encouraged to, and successfully make himself a leader in the team.

Sherwood finishing strongly
The Pies played a solid four-quarter performance against the Panthers last week and were clearly the better side. They provided great run off half back and some of their junior stars really made a mark. A win here will likely see them avoid the wooden spoon and give the club plenty of positives to work with heading into season 2023. With Wilston Grange and Surfers Paradise still to come, the Pies could finish the season with five wins after not winning its first game of the season until Round 13.

Verdict
Sherwood will be too strong in a highly competitive clash between the two bottom teams in the competition. Milford to kick at least four for the Vultures at one end and Coombes to do the same at the other in a nice battle between two future stars of the competition.

Talking Points
Are we still talking the ‘F’ word at Hickey Park?
A lot has to go right for the Gorillas and they’ll need to win every game from here on in. They had one poor quarter against Labrador last week after an epic loss to the Roos the previous week. The result last week showed that this group can still hang with the best, but they need a big scalp. With five wins on the board this season; a win against the Panthers followed by wins against Sherwood and Surfers Paradise, opens the doors for matches against Noosa and PBC. On its day, those last two matches are most gettable for Wilston Grange.

Where are the Panthers placed?
It’s hard to get a gauge of where they are placed. It played three solid quarters against Aspley two weeks ago and then were for the most part, chasing Sherwood all day on home turf last week. Barry and Triffett were missing last week from the side that lost at home, and their absence made a big difference in the midfield and winning the contested ball. Its forward line functioned okay and Hodge is more than capable as the main ruck. Its best list can compete well, it’ll need to have some talent back against a dominant Wilston Grange midfield.

How do we see Jack Manly?
There is a lot to like about the number 48. He had 23 possessions last week with more than half of them contest. The impressive thing for him was his work rate around the physical contests where he laid a game-high 10 tackles against a Labrador outfit that looked incredibly strong. Probably doesn’t get the attention he deserves and the coaching staff at the Gorillas will be fine with that.

Verdict
Wilston Grange need to win, and win big against the Panthers. It should be a great contest as both play-flowing attacking football. Wilston Grange do have the backline to shut down Keegan Downie for making a major influence and that perhaps plays a key part in winning the game. The Gorillas have more to play for and will be too strong.

Talking Points
Lions impressing with their youth
We know PBC is building ahead for a genuine crack at the finals this year but next year is already shaping up nicely. Jack Granville, Will Bella, Brinn Little, Harrison Day, Ashton Crossley, Corey Joyce and Ethan Sekac are just some of the young players that have made their mark this year. Sekac has been outstanding since coming back from injury and has provided that mid-season spark up forward to add some speed to compliment the other names mentioned. If this club continues to build around these younger players to add to their already solid experience, there is a lot to like about this club moving forward.

Did that draw hurt last week for the Roos?
Absolutely it did. A golden opportunity was presented to them at home against a quality finals-bound rival and it the pair fought out a memorable draw. However, victory would have put the Roos on equal points with fifth placed Noosa and sixth placed PBC, now they sit half a game out.

Is this the biggest game in the race for the finals?
Take it to the bank, it absolutely is. If PBC wins, it opens up a 1.5 game gap between sixth and seventh with a massive chunk of percentage. The other side is, if Maroochydore win, it moves into the top six for the first time this year, and with Wilston Grange tipped to take down Morningside leaving it one game behind PBC, we’ll have four teams competing for two spots with Noosa not out of the woods yet.

Verdict
As a football fan, the dream of Wilston Grange and PBC in Round 21 to determine which of those teams makes the finals is still alive. For that to happen, Maroochydore win this one to make things extremely interesting.

Talking Points
The best attack v the best defense
Aspley has the best attack in the competition with an average of 103 points a game after 13 games (RVP averages 98 ppg from 14 matches), while Labrador has the best defense in the competition conceding an average of 53 points per game. This contest will be anything but pretty and it will be an arm-wrestle like no other that we’ve seen this year. Aspley is a fast moving team but it will be hard to see it get more than 12 goals against a quality line-up.

How is this game won?
The four points will go to the team that performs the best in Aspley’s front half. There is no doubt that Labrador can kick a winning score, but its best work is down back. If it can hold Aspley to 10 goals or less, it is more than capable of kicking the 10 goals needed to win the game. It won’t be pretty, but there will be a finals-like buzz to this one that will get you fired up.

Harry Law is proving handy
Formerly from Kyneton in the Bendigo Football Netball League in Central Victoria, Law played the first few games in the Reserves before a handy effort against Aspley had him debut in the Seniors back in Round 8 and he hasn’t looked back since. He’s kicked multiple goals in his passed five games and he has a habit of getting the job done. He is unassuming for his size and does the things that coach Nick Malceski loves. There is a lot to like about this kid and he is played in a line-up with some quality around him. His presence up forward has also made it more available for Malceski to play Bryce Retzlaff in the midfield. So Law, in more ways than one, is proving handy.

Verdict
Aspley by 10-points. Labrador have the runs on the board that in reality, if it finishes sixth at the end of the home and away season to just make finals, it can still win the flag, that’s how good this team is. Aspley still has a bit of the unknown about it purely because recent history has had it play in the VFL, and we all know after the home and away season last year that finals was a different ball game; thanks Maroochydore.