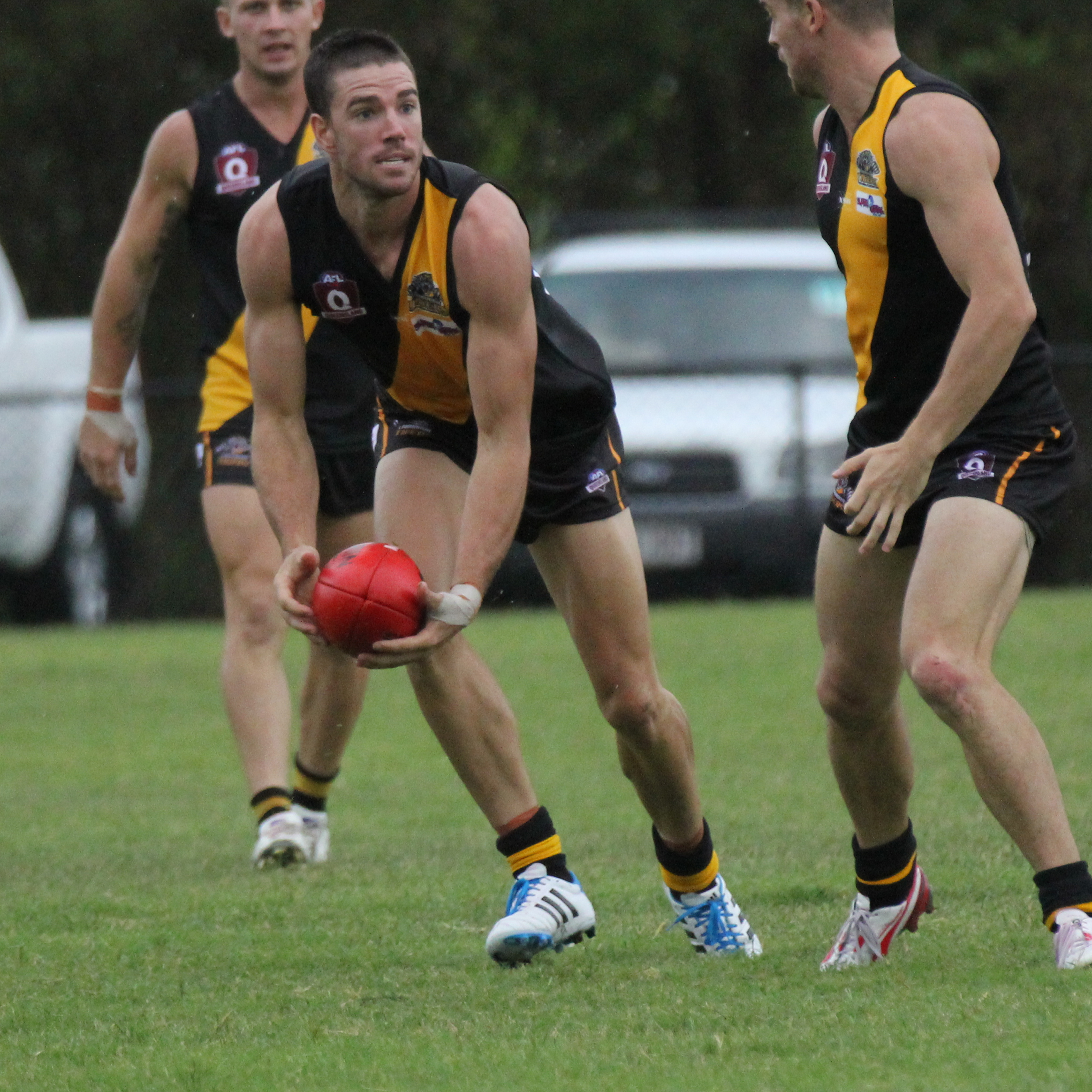 4:32pm: Sorry guys, not a great time for the website to decide to poop itself. Still just a tick over two goals the margin. This has got to be basically over now.

4:29pm: Chris Turner kicks what looks like the sealer for the Tigers. They’re out by 14 points now and there’s roughly two minutes left, by my estimate.

4:28pm: Another Tigers behind and now the Lions are sprinting down the wing. Labrador have cut them off again though. The Tigers defence has stood up extremely well in these dying minutes.

4:26pm: Margin is eight points (and actually points too) in Labrador’s favour, and there’s not much time left. The Lions are throwing everything at this, though.

Make that seven points – a Palm Beach behind narrows the margin ever so slightly.

4:24pm: Palm Beach looked to be getting some momentum, but Tigers defencer cut them off at half-back, with a great defensive mark. Lions coach, Daryn Cresswell, not happy.

4:23pm: Seddon gets away outside 50, and launches one out of bounds on the full. The Tigers have kept it in their attacking 50 this term, but again can’t find the goals enough.

4:20pm: Higgs just tied to snap out of traffic and gave someone a pretty decent falcon. Sam Bourke has been very good the last few minutes.

4:18pm: Sam Bourke just orchestrated a nice one-two on the clubhouse wing and it all ends in a Clint Kelly goal. Margin down to seven points and probably about 12 minutes left.

4:16pm: Kristan Higgs scoops one up out of the hands of his opposition and sets Matt Dillon up for another goal.

4:13pm: Jason Howard kicks yet another behind for the Tigers. Their return is now 9.16. Inaccuracy has been a massive headache for them this year and it hasn’t gone away just yet. They could’ve had this one signed, sealed and delivered by now.

4:12pm: Two minutes after setting one up, Folan now takes a very good contested mark and  goes for his own. Can’t finish it off and it just goes over the tips of Spida Everitt’s fingers.

4:10pm: Labrador’s Sam Folan chips it to his captain, and Ryan Davey will have a shot from about 45 out. He’s kicked it. Gee, he’s been good today.

4:08pm: It takes Palm Beach’s form defender to finally break through for a major. Matt Dillon kicks the side’s first since before half time.

4:06pm: David Manning has taken a solid mark for Palm Beach. He’s missed it. The teams have traded behinds to start this term.

The margin is three goals, in the Tigers’ favour now.

4:02pm: Final term underway. You could cut the tension with a knife.

4:01pm: Labrador coach, Steve Daniel, finishes his address urging his players to show everyone that they want to win. They’re pumped and ready to go for this final term.

All set for a pretty big last quarter here at Coolangatta. The Tigers had the better of that one, with a big effort from Simon Seddon in the forward line. They managed to keep the Lions goalless, while kicking four of their own. Can the Lions come back? We’ll find out soon enough.

3:52pm: Simon Seddon has taken another mark – going to kick from abour 40 out on a tightish angle. He has put everything into it. It falls short – Matt Daniel has a stab and it just goes to the wrong side.

3:49pm: A Ryan Davey special!! The Tigers captain takes a run, a step and a sensational kick. That’s a captain’s goal, if ever I’ve seen one. Their lead is out to 15 points now.

3:48pm: Matt Daniel kicks his first, and his dad, Labrador coach Steve, will be pretty happy with that.

3:46pm: Labrador have had a handful of Inside 50 entries in the last few minutes, but can’t finish it off. They’ve kicked 6.11 for the day and will not want that score coming back to haunt them.

3:42pm: Higgs takes a mark for Palm Beach and a goal here would give them back the lead.

3:39pm: Lions captain, Jesse Derrick, has come off with what looks like a corked knee.

3:39pm: A deliberate call against Labrador and Palm Beach build, but it’s just off.

3:37pm: Seddon takes another one, easy as you like. It’s touched on the line. Margin out to five points, in Labrador’s favour.

3:35pm: Clint Kelly goes for a specky, but it’s collected by a Tigers defender. They pas it around and then kick in hope to the wing, and it’s gone out.

3:33pm: Simon Seddon puts himself in the perfect position and takes a chest mark. He kicks his third goal of the day and puts the Tigers in front, by four points.

3:31pm: Labrador have kicked the first of the quarter. Margin back to two points.

3:28pm: Second half underway. Palm Beach getting a bit of it early.

A low-scoring quarter, with some pretty dour football in that term. The Lions managed three goals to give themselves some breathing space. Both back lines were solid, but were let down by some poor conversion from their attacking teammates.

The curse of inaccurate kicking seems to be affecting everyone again this weekend.

3:03pm: Bryce Perry-Bolt has just come off looking a bit sore. Think he’ll be right, likely a bit of discomfort from a heavy contest earlier.

3:02pm: Four tries at creating a shot and Labrador ends up with a behind for thier efforts. Need to improve their conversion.

3:00pm: Bryce Perry-Bolt has another shot.  Major shank. Behind.

2:58pm: Still a yo-yo. Some good pressure out there. Some poor kicking into their 50s.

2:51pm: Not much happening, just a game of to and fro at the moment. Both backlines standing up – need their forwards to finish off their hard work.

2:47pm: Another Labrador behind and they’ve had the better of the last 3 or 4 minutes. Need to kick one out of this.

And right on cue, Simon Seddon finishes beautifully. He’s been super for the Tigers this season and having another good one today.

2:45pm: Michael I’anson takes a mark in Labrador’s 50. It’s missed. Both sides struggling to really punish their opposition in front of goals.

2:43pm: Davey goes the grubber in traffic and it’s a behind.

2:41pm: Two in a row for Kelly , not a great start for Labrador. Looks like Sam Folan is on him. Might need to tighten the reins.

2:40pm: Clint Kelly has started the quarter off perfectly for the Lions, with a massive torp. They snatch back the lead, up by 5 points.

2:31pm: Spida Everitt has a shot on the siren to put the Tigers in front. And it’s a behind.

It’s been a ripper game to start, here at Coolangatta. Both sides going hard at the footy and tackling strongly. Ryan Davey has seen plenty of it for the Tigers early.
Don’t go away folks, there’s set to be a lot to talk about from this one.

2:28pm: Jason Howard is awarded a free kick and is lining up for the Tigers. a god finisher and he makes no mistake – that’s a Labrador goal. Scores are level – 3.2 (20) all.

2:25pm: Didn’t take long for them to correct that – an Everitt tap gives Davey an open goal and an easy major.

2:25pm: Labrador captain, Ryan Davey, kicks a beauty from a tight angle, almost into the hands of Everitt. But he can’t make it stick.

2:22pm: Jesse Derrick cuts off a Labrador attacking play at the 50, and the Tigers return the favour.

The weather today is rather strange – probably the coldest warm, sunny day I’ve ever experience d in the beautiful state of Queensland.

2:18pm: A pair of strong Sam Bourke hand passes in traffic get the Lions moving forward but it’s eventually escorted over the line.

2:17pm: Chris Turner having a shot for the Tigers. It falls to the right and it’s a behind.

2:12pm: Clint Kelly pops it over the top under pressure in the goal square nad perry-Bolt gets his second and the Lions’ second.

2:10pm: Seddon picks it up in Labrador’s back line and goes for a run up the guts. It’s turned over in the forward 50.

2:05pm: It’s already a pretty physical contest out there. Nothing untoward, just plenty of desire in both sides.

2:02pm: Here we go. Some big names out there today – Spida Everitt in Labrador’s forward line. No Tim Fielding for Palm Beach – still working his way back from the hammy. No Brock Askey either.

Should be a cracking contest.

1:20pm: Welcome to Coolangatta, for the Palm Beach-Labrador clash. It should be a ripper game of footy. Thanks for joining me.

We’ll have all the action as the game kicks off, at 2pm.

In the meantime, check out the preview and record here: http://bit.ly/1i4wbUq