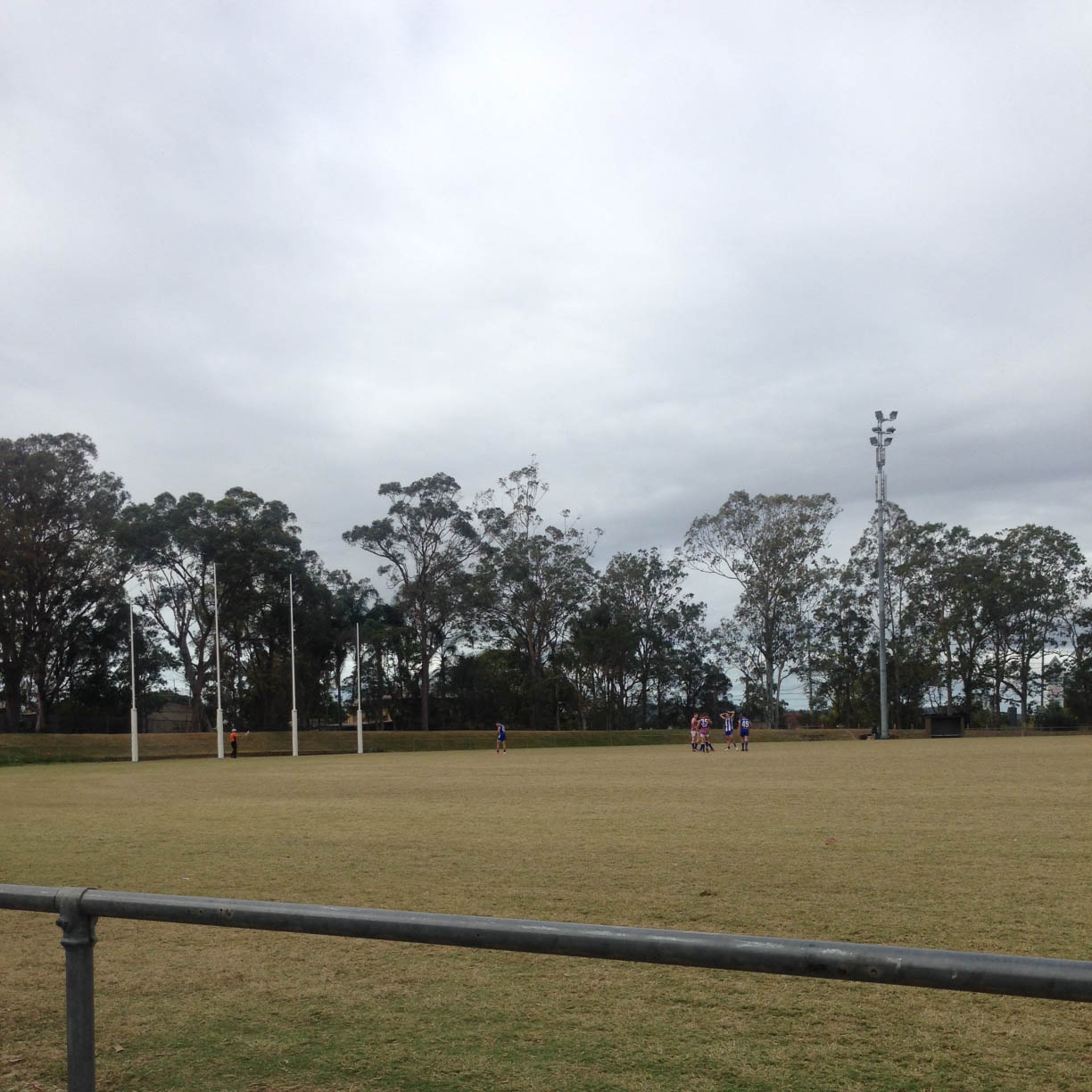 The Gorillas fought this one out, but left their run too late, and the Vultures have now effectively sewn up their finals spot.

4:32pm: Another goal dribbles through for MT Gravatt. The margin is at 49 points.

4:31pm: Meanwhile, Grange have kicked another goal and they’re still fighting it out here.

4:30pm: Dan Campbell, who has had a troublesome shoulder this season, is gone for the day. It looks like an arm or another shoulder injury for him. Disappointing end.

4:29pm: Jonah Licht puts a huge attempt and it’s plucked by Rhys Estall on the goal line, between the behind and goal posts.

4:27pm: Jesse Green with his second has put the result well beyond reasonable doubt. Mt Gravatt has a  44-point lead.

4:26pm: Another Vultures goal. That’s the game there.

4:23pm: Six goals up 20 minutes into the last ,you would think that MT Gravatt might try and put the kybosh on the game. That is exactly not what they are doing – they’re still playing at a frenetic pace. No icing the clock here.

4:20pm: Trent Aarons with another shot. It’s a narrow angle, but he’s been kicking well today.

Right on cue, he misses everything.

4:17pm: A 50m penalty gives Campbell another go and it’s a bit more conventional this time. It makes no difference, though, it’s a goal. Margin is 32 points now and grange has scored more goals this quarter than they had for the rest of the game.

4:15pm: Grange replies with a toe poke from Hugh Campbell, that somehow dribbles over the line.

4:14pm: A settler to Mt Gravatt. This term has so far been the contest we were hoping for from the first bounce. Looks like Grange might have just left their run a little too late.

4:11pm: Frazer Neate just coughed up a handball to Grange’s Kris Jahnke, who in turn hit up Trent Aarons on the lead. It is a massive roost and it’s a good one too. Seven goals the equation now, a 38 point difference.

4:10pm: They might be well down, but it’s Grange who are looking the more confident side right now.

4:08pm: Mt Gravatt’s Adam Boon just copped a pretty vicious falcon on the ground. Was a bit slow to get up, but looks alright.

4:06pm: Grange looked to be getting a bit of a run on, but the Vultures have hit back.

Jonah Licht slots one from a narrow angle. Lead back out to 44.

4:02pm: Steve Brittain starts the quarter the best way for Grange, with a goal.

Could it be the start of a comeback?

Mt Gravatt can practically taste that fifth spot with one quarter to go. That was a more even term, with the Gorillas kicking two goals to one, but they’re going to need to lift to pull off what would be a miraculous comeback.

3:51pm: After a struggle on the wing, the Gorillas look likely to get a major, but it hits the post pad as it bounces through.

3:46pm: Jesse Green has his first of the day, taking Mt Gravatt’s lead to 55 points.
It’s going to be hard for the Gorillas to come back from here.

3:40pm: Finally something for Grange to celebrate. Matt Trewhella boots a big goal for the Gorillas. They trail by 49 points.

3:39pm: Grange again having a handful of opportunities but really not capitalising.

3:38pm: Brittain just found a step ladder of the Mt Gravatt wing, but they can’t finish it off.

3:36pm: Steve Brittain looks to go for goal from an impossible angle, but as it floats across he face into the hands of Greg Lavey, it becomes clear it was obviously a pass. Lavey’s shot misses.

3:32pm: It hasn’t been the greatest day for Grange today but they have are certainly the clear winners in one off-field category. Their collective beard growing efforts are certainly impressive. It’s clear where the QAFL hipsters are.

3:32pm: He tries for another one- a miracle around the body shot. Celebrates, but it turns out to be premature.

3:29pm: Estall with the first shot of the quarter, for Mt Gravatt, but he misses.

3:26pm: Grange had the first clearance of the term, but it’s cut off by the Vultures’ defensive line. They rebound well but Grange turn it around again.

Brenton Saunders kicks one on the siren to give the Vultures a 58-point half time lead.

Grange couldn’t take a trick in that term, again struggling to finish off in their forward 50.

3:01pm: Holding free kick to Wilston Grange but it hits a pack of players and no one can claim it.

It really is yo-yoing between the 50s at the minute.

3:00pm: Vultures captain, Joe Murphy, does a nice one-two, but kicks it to no one and the footy is locked up just outside their attacking 50.

2:56pm: David Tough has a shot for the Gorillas. Passes it off to Dan Campbell, who eventually kicks a behind.

2:50pm: Brenton Saunders takes a ripper mark about 25m out, and he slots it. The Vultures are looking pretty comfortable now.

2:46pm: Jesse Green puts everything behind an unlikely kick, under pressure, and it lands in the hands of Rhys Estall, who kicks a goal.

He’s been handy in that forward line today.

2:45pm: Trewhella has another shot for Grange, on the run, but it drifts to the left. They have butchered some opportunities today.

2:43pm: A free kick to Trewhella in the goal square gives the Gorillas their first of the game.

2:41pm: Matt Trewhella takes a mark for Grange, they’ve moved him into the forward line, but the kick is not a great one, across the face and into the hands of James Markham.

2:40pm: Mt Gravatt have a second in this term, through Sam James. Grange yet to  kick a major.

2:39pm: Both sides trying to move the ball quickly tis term, handing it off after marks to move it along.

2:36pm: Second quarter back. Mt Gravatt with the first clearance this term and Dom Nash finishes it off well. The perfect start for them.

A couple of quick goals to Mt Gravatt in the middle of that term have helped them to a bit of a lead at the first break.

IT’s been a pretty scrappy start to the match, with both sides putting plenty of pressure on their opponents.

2:28pm: It’s turned pretty scrappy late in this quarter. Both sides turning it over and there’s been plenty of stoppages.

2:26pm: Frazer Neate goes for a bit of a run but can’t do anything with it.

2:23pm: Steve Brittain underlining his importance to the Grange side, taking a mark on the wing and following it up as well.

He is wrapped up, though, and the Vultures get a free for holding the ball.

2:21pm: Wilston Grange are playing a much smaller side than they normally would and it’s hurting them a touch. They’re lacking the tall targets in the forward line and getting beaten in their attacking 50 a bit too much.

With Matt Trewhella on the ball as well, they’re missing a bit of his impact as a key position player.

2:19pm: Frazer Neate hits Rhys Estall, dukes out, and the Redland-listed forward is lining up for a set shot.

He kicks it truly and their lead is now the four goals.

2:16pm: Grange have been strong with their counterattack to day and Steve Brittain ends up on the end with a mark on the boundary. He centres it, but in a pack of players, it’s a Mt Gravatt defender who takes it.

2:16pm: Todd Carbone with a Vultures set shot tight on the boundary ,right in front of the change rooms. His kick goes across the face.

2:13pm: Another Grange behind. They’ve had a few opportunities but can’t capitalise.

Right on cue, the Gorillas give themselves a chance and just miss.

They had a stab earlier, but it was across the face.

2:07pm: Adam Boon kicks the first for the Vultures. It’s a big boot and they really needed it. Mt Gravatt having the better of it early, if only just.

2:05pm: James is marking it well today – he grabs one in the centre and passes it off to Rhys Estall, who nabs it one out.

2:02pm: Frazer Neate sets up Sam James nicely, with an explosive run through the middle of the ground. James kicks from about 50, but it falls short.

2:01pm: Jimmy Markham cuts off a Grange opportunity, but the Gorillas rebound well and have another go.

2:00pm: Mt Gravatt with the first clearance but it’s already clear no one’s going to have much space today.

1:52pm: It’s a do or die clash at Dittmer Park today. Mt Gravatt has the opportunity to sew up fifth spot with a win. They have let a few chances slip this season, so they’ll be hoping they can change that trend here.

There are a few ominous clouds in the sky here at the Vultures’ home ground and the Gorillas probably wouldn’t hate a wet game too much, so it will be interesting to see if the weather has any impact on the game.