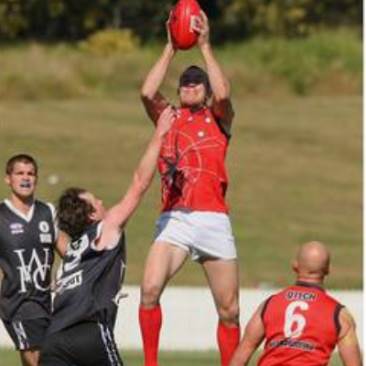 Sandgate and Jimboomba will meet under lights this Friday night at Leyshon Park to determine who will earn a Preliminary Final berth.

The Hawks faced off against Wynum last week in a Qualifying Final matchup, but ultimately went down by 26-points against a smoother Vikings outfit. Jimboomba had a big confidence boost in their Elimination Final game last week, thrashing in-form Yeronga South Brisbane by 98-points.

Everything will be on the line in this one, no more second chances for shortcomings or missed opportunities, the result is simple, loser goes home. Jimboomba have already proven that they can perform in a do-or-die situation and will take that confidence into Friday’s clash.

The Redbacks and Hawks have squared off twice this season, with the ledger square at one victory a piece. Sandgate claimed the four points in the opening round of 2014, downing Jimboomba by 52-points. The Redbacks bounced back in Round 12 after a string of good performances to down the Hawks by 27-points.

On a neutral ground, the game is well and truly up for grabs. Jimboomba will start favourites after winning eight of their last nine, while Sandgate will need to bounce back after a mediocre month of football to keep their premiership hopes alive.

Undefeated minor-premiers, Woodsmen, and second placed Wynum, will clash this week in a semi-final showdown that will reward one club with a week off and a spot in the 2014 QAFA (B) Central Grand Final.

Woodsmen and Wynum have been the clear top two teams in this years competition, but only one team will earn the luxury of a week’s rest and a guaranteed Grand Final spot. Woodsmen ran the table in 2014, 16 straight wins making them firm favourites for the flag. Not too far behind, Wynum finished the year with an extremely impressive 14-2 record, proving they are serious contenders.

The Vikings and Woodsmen clashed just once during the regular season, with the boys from Chelmer earning bragging rights with a comfortable 53-point win. Woodsmen will start firm favourites, but Wynum are a legitimate chance of winning if they can neutralise key forward, Jay Baker and on-baller, Reid Dobson.

Despite finishing equal first on the QAFA (B) North table, Bribie Island face an elimination semi-final matchup this week against Gympie.

The Bulldogs strung together an impressive 11-5 season in 2014, but a poor percentage cost them a minor premiership and a double chance in Finals.

The Cats have been far less clinical in 2014, claiming just four wins, on their way to a disappointing 4-12 record. The dismal 0-16 season from Glasshouse Mountains secured a finals berth for Gympie, although the matchup on Saturday may prove to be as lopsided as the two clubs Win/Loss column.

Bribie and Gympie have met four times in 2014, with the Bulldogs holding a comfortable 3-1 record over the Cats. The two teams first clashed in the opening round of the season, with Gympie pulling off a surprise 63-point victory.

Since then, the Bulldogs have dominated Gympie, recording 35, 147 and 47-point victories. Bribie hit their straps at the perfect time in the season, winning four of their last five to march into the Finals full of confidence. Gympie have slumped at the wrong end of the season, losing five of their last six to look well away from claiming a Finals victory.

Bribie will go into the game deserved favourites, with the winner to play the loser of the Maroochydore v Pomona game.

Holding onto the minor premiership by percentage over both Pomona and Bribie Island, Maroochydore will be hoping to make the most of their home ground advantage this week in the Grand Final qualifier.

Both the Roos and Demons finished 2014 with an impressive 11-5 record, with Maroochydore’s superior percentage denying Pomona top spot.

Despite the Roos claiming the minor premiership and boasting home ground advantage, the Demons will take a 2-1 head-to-head record over Maroochydore into this Saturday’s semi-final.

Pomona toppled the Roos by 23-points in Round 3 and the Roos earned revenge in Round 9, winning by a comfortable 42-points. The Demons broke the deadlock in Round 16 when the clubs met for a third and final time, running away 30-point winners.

While Pomona will be confident heading into the game, they will need to contend with Maroochydore’s three key forwards, Jeremy Cockram, Steven Morris and Shannon Beavis, who have kicked 99 goals between them.

Maroochydore will be hard to beat on home soil, boasting an impressive 7-1 record at the Maroochydore Multisports Complex. The only team to beat them there, are this week’s opponents, Pomona. It’s anyone’s game.

Lismore and Ballina will clash in a do-or-die semi-final this Saturday afternoon at Bond University, in what is sure to be a tight affair.

The Swans and Bombers have been neck and neck all year on the premiership table, and after 17 competition rounds, the two clubs 8-8-1 record could only be separated by percentage, which favoured Lismore by just three.

The two clubs have clashed four times in 2014, with the Swans leading 2-1 in the head-to-head battle, after a draw occurred in Round 7.

The Swans will be full of confidence heading into this week’s semi-final after winning their last three of year to finish 2014 in supreme form. On the flip side, Ballina have lost their last three games to limp into the finals, looking well out of form.

The Bombers will need to rely on a big effort from leading goal kicker, Timothy Price, if they are any chance of knocking off the Swans and keeping their finals hopes alive.

Bond University are clearly the team to beat in the QAFA (B) South, and Tweed Coast will have nothing to lose this Saturday, with both teams guaranteed a second bite of the cherry if they come up short.

Bond have had a scintillating 16-1 season, and despite a huge upset loss to Byron Magpies in Round 11, the Sharks have looked like premiership favourites all year.

Tweed Coast have enjoyed a solid 12-5 season that sees them finish second on the ladder. The Tigers consistency at the start and end of the regular season has put them in a position to contest for a flag in September.

The two clubs have met four times in 2014, with Bond clearly the best side in every matchup, leading the head-to-head 4-0, with an average winning margin of 58-points. A final round 86-point clubbing over the Tigers will see Bond start clear favourites.

Both clubs will be desperate to come up trumps in this one, with the winner heading straight into the Grand Final, while the loser will have to play the winner of Lismore and Ballina in next week’s Preliminary Final.