QAFA (A) grand final spot on the line 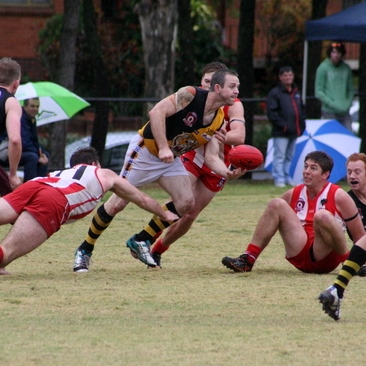 The dream Preliminary Final has eventuated as second placed Redcliffe play host to third placed Pine Rivers for a chance to topple top-ranked Griffith-Moorooka in the Grand Final.

With only four points separating the two sides, the game appears evenly matched on paper.

With each side possessing a spearhead in addition to a fine supporting cast, the game may very well descend into a shootout between respective goal kickers Ben Long of Pine Rivers (33 from 16 games) and Aaron Kingdon (32 from 12 games) of Redcliffe.

The Tigers holds a 2-1 games advantage over their Preliminary Final rivals, including the all-important psychological victory in their home Qualifying Final bout two weeks ago.

With a match this difficult to call, one begins to wonder whether the intangibles prove the decisive factor in to outcome.

With the game on neutral territory, this pundit will go out on a limp and say that he believes Redcliffe will use their mental edge to overcome a valiant Pine Rivers, who unfortunately will not receive the bounce of the ball on the day.

QAFA (B) finals
Colts top eight to fight it out