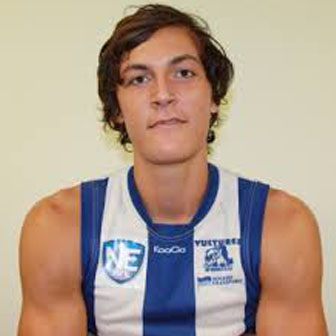 The success of the Hyundai Help for Kids Lions Academy was once again highlighted, with key position prospect, Hammelmann, joining graduates Liam Dawson and Harris Andrews, who were officially selected last week in the 2014 NAB AFL Draft on the Gold Coast.

Hammelmann was impressive at this year’s Under-18 Championships, kicking seven goals from three games. He is quick on the lead and has strong hands.

Lions recruiting manager Stephen Conole said the club was close to taking him last week, but after committing to Dawson, Andrews and father-son selection Josh Clayton, had to wait.

“We were ecstatic that he got through to the Rookie Draft and obviously had no hesitation in nominating him as a priority Academy rookie selection,” said Conole.

The Kangas used their first pick in today’s draft on 206cm ruckman Braydon Preuss, who spent the year at the Gold Coast Suns Academy and playing for the Suns’ NEAFL team.

"He (Preuss) shows an aptitude for tap work, has ability to get around the ground and is reasonably coordinated,” said Lewis

“He still has a bit to learn but has made steady improvement over the course of the year. Ruckmen are hard to find and I suppose the national draft would show there’s not a hell of a lot around. With his attributes we can put time into him and work with him."

Meanwhile Tom Fields, the son of former Essendon player Neville Fields, has been likened to Blues’ backman Sam Rowe, for taking the tough pathway to the AFL.

“He could have quite easily stayed in his comfort zone in Queensland and played with his mates, but he took it upon himself to go and better himself in the SANFL, and has had a really good year.

“He has a booming left-foot kick and will play on the wing or half-back.”