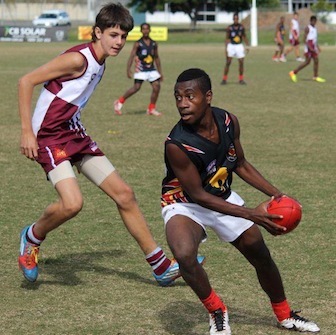 The Coca-Cola Binatangs have been participating in the Queensland Under 14 Championships since 2007, and until this year had not played in a grand final.

The State Academy Championships bring together 7 other development squads from throughout Queensland, with PNG taking the eighth spot on the roster.

Earlier in the week the Binatangs recorded victories over the Sunshine Coast and Brisbane West to win a place in the 2013 decider against North Queensland.

Coach Ben Drew had simple instructions for the team before the match that was conducted on a slippery surface after torrential storms the previous day left the Broadbeach Oval heavy under foot.

Drew said “I want you kick the ball to space and use your natural speed to run, run and run.”

The Coca-Cola Binatangs carried out the coaches instructions to perfection.

There were no grand final nerves for PNG who started well and within two minutes Port Moresby’s Saburo Gerard had goaled. Minutes later Justine Murawa (Kavieng) kicked truly to enable the Binatangs to go into quarter time with a handy 2.2.14 to nil lead.

Two more quick goals in the second quarter to Sylvester Wesley (Mt. Hagen) and Cobern Gamuna (Port Moresby) and the signs were ominous for a PNG victory. North Queensland, coached by Adam McDonald responded with two goals of their own to see the half time scoreline at: PNG 5.2.32 to NQ 2.0.12.

The Binatangs third quarters had been poor earlier in the week when they let match winning half time leads dwindle through concentration lapses. There were no such hiccups in the grand final, due largely to the sterling work of the all Lae full back line of Thomas Wakon, Samuel Kenjau and Joe Mondo.

When pacy winger Paniel Penias (Lae) goaled early in the last quarter the game was sealed. In a dominant display NQ were held scoreless again and the Coca-Cola Binatangs ran out easy 54 point victors.

The victory caps a good year for the AFLPNG Coca-Cola Talent Pathway with the under 16 Binatangs winning the South Pacific Cup by 10 goals back in April.