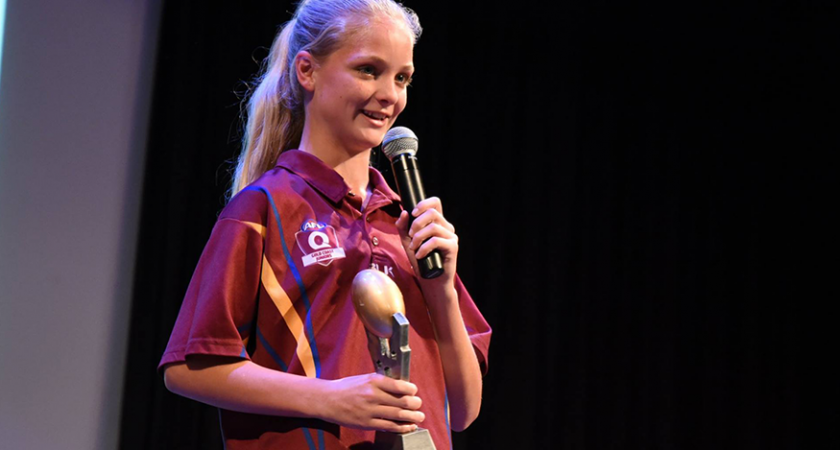 Palm Beach Currumbin’s Piper Phelan cleaned up at the AFL Golf Coast Junior Awards, claiming the EXIMM junior club person of the year, under 13 Best and Fairest, and Troy Clarke Player of the Year award.

The presentation was held at the Southport Sharks Event Centre with 400 people in attendance.

Phelan defeated the competition polling 34 votes to win the Under 13 Girls Best and Fairest and earn the Troy Clarke player of the year award by tallying the most votes in any competition.

Piper’s father and Junior Club President at Palm Beach Currumbin, Stephen Phelan, said that his daughter was surprised and proud to have such a successful evening.

“I knew she was capable, she is good at what she does. She didn’t expect all the awards and she was a bit overwhelmed with everything but she deserves them which is the main thing.  She’s wrapped. She is very overwhelmed but it means everything to her she has worked hard to get where she is now,” said Phelan.

Piper has been playing AFL for several years and it was her stubbornness that pushed her father to sign her up.

“She’s been playing for seven years now. I was registering my son to play years ago and she stood there and told me she was playing and I didn’t believe her. She wouldn’t leave until I signed her up,” said Phelan.

Piper has developed into a ball- magnet midfielder for Palm Beach Currumbin in both the Under 13 and 15 girl’s teams.

“She plays in the middle with a lot of running. Her strength is she can find the footy, conditioned well, good hand skills and she reads the play very well,” he said.

Piper was also recognised for her hard work off the field by winning the EXIMM junior club person of the year, which her father said is well deserved for years of assisting the club.

“She’s always at the club. Helps out, works at the canteen and helps the AFL with a few events such as the recent Inclusion Carnival. Runs boundary, runs water whatever needs to be done she’s normally there,” said Phelan.

Phelan also highlighted that Piper has leadership qualities that will see her take on more leadership roles in the future.

“She’ll be a future leader for sure, she’s a leader now. She would’ve been unnamed captain of the 13’s easily but as the coach should share that around at that age,” he said.

Piper’s dream is to play professionally in the AFL Women’s competition.

“That’s her goal, just ask her. She’s got a few years before that comes about which she now trains hard for,” said Phelan.

After a tremendous season Piper is now focused on playing well in upcoming carnivals and having a good preseason.