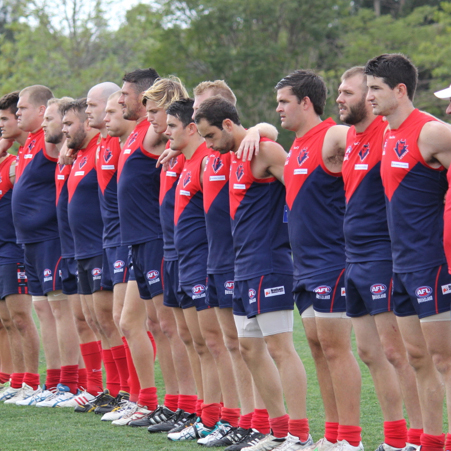 They were the red-hot favourites and the Surfers Paradise reserves delivered in the SEQAFL Division One flags, defeating the Magpies 16.8 (104) – 9.11 (65).

The win finished an undefeated season for the Demons and gave them back-to-back flags.

They were pushed all the way by the Magpies, in a game that was heavily affected by swirling wind.

Surfers dominated a dour first quarter, after a stalemate to start the match.

It took 13 minutes for the first goal to be scored, by the Demons’ Matthew Skrinnis, and from there they took the upper hand.

It could’ve been game over in the first quarter, such was the dominance of the Demons, but the Magpies’ pressure was sensational.

The Demons kicked three of the next four goals, with a late reply from the Magpies’ Matthew Green in the shadows of quarter time.

Surfers carried on their momentum into the second quarter, as Philip Nolan kicked the first in the opening minute.

The Magpies won more of the ball in the middle, but couldn’t convert their opportunities.

They didn’t let up the fight in the second half, but the Demons held their ascendency.

Jay Suban put his stamp on the game, asserting himself in the goal square, kicking two for the quarter.

The return of Matt Thompson and Kale Reed to the Magpies’ outfit did not have much impact on the game, with both having relatively quiet games.

The last quarter was all Demons, as the Magpies finished with 17 men after a red card at the final change.

Reed kicked the first two of the final quarter, before the Demons kicked back with three in a row to put one foot in the door.

Bryce Crossley stopped the bleeding temporarily, but the Demons train continued to roll on with goals to Nolan and Green in the dying minutes.

Dylan Armstrong was the best on ground for the match, with a stunning performance at centre half-back, returning from seniors duties in the final.

Surfers coach, David Sloan, said it was fitting they played the Magpies, who spurred a change in the team after a 2012 victory.

“Eighteen months ago, they gave us a touch up and we realised where we had to improve,” he said.

“We were pretty pleased to play these guys today, as it was an opportunity to prove ourselves,” he said.

To his own players, Sloan had plenty of wonderful things to say.

“I’ve coached this group for four years now and their character is unbelievable,” he said.

“They’re a selfless group and a champion bunch of guys.”

Magpies playing coach, Todd Dunn, paid tribute to the Demons side and credited them on their rare achievement.

“They’re obviously a very special group coming through and I hope to see them play senior footy in the future,” Dunn said.

“We really gave them a run for their money. We’ve got a good young group, and we hope to see some in senior football.”