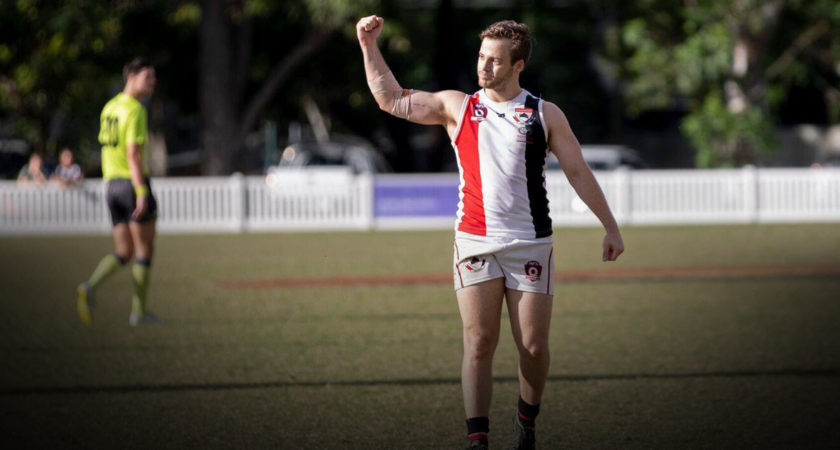 Demons down Vultures despite contrasting halves

Surfers Paradise retained their second spot on the QAFL ladder after a rather hot and cold performance against Mt Gravatt on Saturday.

Very good in the opening half, then fairly pedestrian after half-time, the Demons eventually won by 13.5 (83) to 7.9 (51) at their Sir Bruce Small Park headquarters.

Ahead by 23 points at quarter-time, then by 32 points at the big break, the Demons suddenly tumbled into errant ways as their skills, particularly their handball, broke down terribly.

Where they had been hitting targets by hand before half-time, the Demons coughed up turnover after turnover and allowed the Vultures back into the game and it was not until two goals from diminutive goal sneak Sam Hilton-Joyce sealed the victory.

Surfers coach Brad Moore came up with the best theory on his side’s proverbial game of two halves.

“We probably made the game a lot harder than it needed to be by going away from a few things after half-time,” he said.

“But give credit to Mt Gravatt, their effort and work rate probably picked up as well.

“Yes, the handball was poor. There were times we tried to create a handball that didn’t need to be created.

“We had guys who could have been out and kicking but were probably more focussed on receiving handballs.”

After a good start, when big centre-half forward Matt Green kicked three goals in the opening term, it looked a case of how far for the Demons.

Mt Gravatt’s was a start that has become a concern for coach Adam Boon.

He said it was the fifth or sixth time his side had trailed at quarter-time and definitely an area that needs looking into.

“Take away that first quarter and we probably lost the rest by a goal,” he said.

“We have identified our slow starts but after quarter-time there were lots of positives for us.”

As the Demons lost the plot somewhat, the Vultures sparked, led by Australian touch representative Jesse Green who was moved on to the ball and into the ruck where he was excellent.

Also sparking his side was Aaron Christensen who went on to the ball and threatened to take the renowned Surfers midfield machine apart.

While Surfers cemented second spot on the ladder, Mt Gravatt held on to fifth but are now two wins out of the top five.

Tigers regain some roar by beating the Magpies

Labrador have threatened a late-season charge at finals football with an upset win against the Western Magpies at Cooke-Murphy Oval on Saturday.

Slowly regaining some key personnel and with their large intake of recruits starting to gel, the Tigers showed glimpses of their glory days by downing the Magpies by 12.12 (84) to 7.8 (50).

The Tigers now have three wins after their slow start to the season and are now sitting sixth on standings, level on points with Mt Gravatt but 12 percentage points behind the Vultures.

It was, as coach Liam Burke said, the Tigers’ best four-quarter performance of the season as they took control of the clash early, then shot down any possible comebacks from the visitors.

Now that scent of finals has become stronger.

“Absolutely, that has given us something for the remainder of the season,” said Burke.
“I was really proud of the boys for responding because it was a bit of do or die for us. If we had lost it would have left us a long way off the pace.”

Burke thought the Tigers taking advantage of the wind better than the Magpies was a key to the win, but also the second quarter into the wind, when they kicked 1.3 to 1.2, was a decisive statistic.

In the opposite camp things are not the best right now.

The Magpies have fallen to seventh on the ladder with only two wins and coach Brydan Morgan has a big task to get his side back on track.

An ability to kick big scores is hurting the Magpies but Morgan feels it has more to do with players letting the team down.

He has promised a number of changes to team selection and positions because, in his words, there are not many other options open to the club.

“We will be making some selection and positional changes because there, is not much else we can do,” he said.

“In the first half we played some good footy and the game was anyone’s.

“In the third quarter we didn’t match their intensity around the ball and they won contested possessions.

“To be honest, we have too many passengers and too much is being left to too few.

“Today we had only half a dozen you could say performed their roles.”

Good news for the Magpies was the return of skipper Ryan Harwood who appeared to come through his return from foot surgery unscathed.

Skipper and key forward Bryce Retzlaff was named best for Labrador after three goals but, strangely, the Magpies came up with defender Luca Winton, direct opponent of Retzlaff, as their best.

Lachlan Dennis was one who tried hard for the Magpies in a variety of positions, and another to be rated by Morgan was Dan Edwards on a wing.

Retzlaff, Jaicob Kenny at centre half-back, Andy Hollis in the ruck for 90 per cent of the match and 19-year-old Josh Deacon were the best Tigers on a good day for the club.

Morningside avoid an upset at the Grange

Morningside narrowly avoided a major upset when a final-term surge lifted them to victory in a hard-fought Brisbane derby against Wilston Grange on Saturday night.

With the Panthers trailing by four points at three-quarter time, reliable goalkicker Eddie Mallan came to the rescue with two goals in three minutes to start the final term, which gave the Panthers the lead by eight points.

It was a tough call for Grange coach Barry O’Brien yet he was more than happy that his players responded to the Broadbeach mauling seven days before.

“We just didn’t capitalise in the last quarter but you can’t complain about the performance from the players,” he said.

“They bounced back and showed that we can compete against the better teams and the good thing was that we were in the game the whole way.

“It was just that we made some silly mistakes by turning the ball over too much in the last quarter – and we were made to pay for them.”

The result proved one thing in that the Gorillas play much better on home turf because it was at Hickey Park on Good Friday that they beat Western Magpies convincingly.

Frazer Eaton at centre half-forward, Luca Mason on a wing and key defender Liam Molan were excellent for the Gorillas although Watts felt the home side was hurt when they lost ruckman Dylan Reid.

“They were in the game for 95 per cent of it and it was only when Reid went off injured that we were able to get on top of the clearances,” said Watts.

Mallan’s game-changer was due reward for his good work earlier in the game, according to the coach.

“He played across half-forward and had some time on the ball,” said Watts. “He has great energy and stays involved in the game as best he can – and yesterday he got some reward for his hard work.”

Redland-listed Cameron Spence in the middle, Brad Howard across half-back and elusive wing-flanker Sam Godfrey were other Panthers to impress.

Broadbeach way too classy for Sandgate

Surely things can only get better for struggling Sandgate after they copped a dreadful hiding at the hands of Broadbeach on Saturday.

Heading down the M1 for the clash at Subaru Oval on the Gold Coast, the Hawks would have had hopes of an improved, and competitive, showing against one of the genuine flag contenders.

Away from early in the first term – it took Broadbeach 13 minutes to bring up their second major – Sandgate looked to be at least competitive.

That was it because once the Cats put the foot down it was one-way traffic right through to the final siren.

Compounding the embarrassment for the Hawks was the fact that it took until the 15th minute of the last quarter for Lochlan Harrop to register their first and only goal for the match.

Understandably everything was rosy in the Broadbeach camp, even after that played with only 20 men following first-term injuries to Xavier McMahon (hamstring) and Tom Beston (shin).

“I was pleased with the way it went after we had to throw players around with two rotations down,” said Broadbeach coach Beau Zorko.

“To keep them goal-less until the last quarter was a terrific effort.”

One neutral observer at the match said he was disappointed that, after their encouraging start, Sandgate threw big numbers back in defence attempting to choke the Broadbeach flow.

All that did, he said, was for the young Hawks to try to get the ball back downfield in a hurry, attempts that invariably led to the Cats regaining possession and pumping the ball goalwards.

Where the Hawks go now after perhaps their worst loss in recent history remains to be seen but they have to bounce back somehow.

Best for the Hawks were Jordan Maynard, teenager Ky McKenzie and Jakob Hartup.

For Broadbeach Zorko liked the effort of Ben Hancock as a fill-in ruckman for the injured Betson.

“After that you could raffle it between Jason Cloke (five goals), Jackson Fisher and Kai Sheers for all his hard work.”