Not quite Fyfe: a rookie’s tale 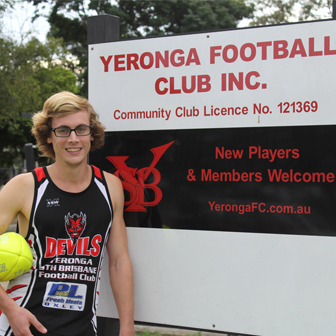 If you stand 153.4 metres away from AFLQ media intern Harry Krebs and squint your eyes, he’s a dead ringer for Freo’s Nat Fyfe.

In his new weekly column “Not quite Fyfe” Harry shares his adventures as a new community football recruit.

Week One: The Sore and Early Days

I’d always wanted to play footy and honestly couldn’t believe I’d left it till I was 22 to give it a go.

I joined my local club, Yeronga Devils Thirds in the QAFA B (Central) competition, halfway through their preseason training. I walked in brimming with confidence because I thought at that time I could handle the exercises. I was wrong. All the running they make you do, it’s enough to make a marathon runner say, “bugger that”.

The other blokes were good about it though. They had been in my shoes before. Their main advice for the long-term was to keep going back to training and try and get some games under my belt.

Each training session we’d work on a few major areas: fitness and endurance, strength and ball-skills. Ball-skills were by far the hardest for me to come to grips with. It was hard to know how to determine the strength of a kick or a handball. The hardest I thought was to buck up the courage to take a mark or reach in and grab the ball when there were half a dozen other hands and boots flying around doing the same thing.

I soon realised using the voice is a big factor, which is really reinforced at the club. You need to make your mates aware that no one is going to belt them when they have the ball or that you have their back in a marking contest. Of course, you yell your guts out when you want the ball kicked to you, that’s just common sense.

I’m only a little bloke, a smidge under 6-foot and thin as a straw, but I know you can get away with all your teeth intact if your team use their voices well.

It was about two weeks in when I put my hand up to play Aspley in a preseason match. It was a mongrel of a game, and since I didn’t have contact lenses at the time, I couldn’t very well see where the mongrels were coming from.

I gave it a good crack though and played three quarters, two on the wing and one in the forward pocket where I almost set up a goal but the bugger sprayed it to the left on a set shot. Physically, I got belted, there’s no other way of saying it. The Aspley boys looked like they could eat a fishbowl of Weet Bix and still have room for a second go.

The majority of our team were upwards of 25. There were a few younger blokes there, who were always keen to learn the tricks of the game.

Our coach is good; we’ve always called him “Dingo”. I thought his real name must have been Ernie, but it turned out to be Ian. God knows what the go is there.