NOOSA OUTPLAY PBC IN THE MUD 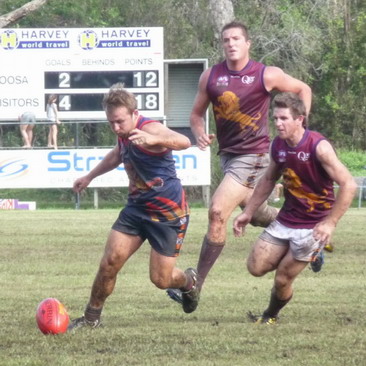 NOOSA won the battle of the heavyweights up on the Sunshine Coast and new coach David Martin had instant success when his Wilston-Grange Gorillas rolled hot favourites and last season’s beaten grand finalists Sandgate in highlight matches to open the new Pineapple Hotel Cup season.
Also off to flying starts were Burleigh (against Mayne) and Surfers Paradise, who survived in a thriller against Springwood.
In the other match, the Western Magpies made a triumphant return to the QAFL’s Premier League with an encouraging away win over season 2010 finalists Maroochy-Northshore.

Tigers and Lions turn on a cracker
NOOSA grabbed early-season bragging rights over their Gold Coast rivals Palm Beach-Currumbin with a 20-point victory at Weyba Road on Saturday.
Noosa, the 2010 champions, won by 12.7 (79) to 9.5 (59) but the final margin did not do justice to Palm Beach, who were down only two points at the 25-minute mark of the final term.
As Noosa coach Wayne Fletcher put it, it was ‘a top game, a ripper’ between the competition’s heavyweights on an absolute mudheap.
“It was physical, as you’d expect, and there were a few good body clashes,” said Fletcher. “In those conditions it was a crackerjack match.”
Noosa finished off the Lions with three late goals but if there was any one obvious reason why the premiers took the points, it was through new forward Danny Brewster, who has signed with Noosa from Narre Warren in country Victoria.
“He was clearly the difference,” said PBC coach Craig O’Brien of Brewster’s five goals at full-forward. “In those conditions it was a great effort.”
In the absence of Jeff Brain, who has moved to NEAFL club Aspley, Brewster showed he is going to be a force. He offers a physical presence and possesses a good football brain.
Another new Noosa signing, Dayne Frew, also went well at centre half-forward. Frew has moved north from South Bendigo.
Yet it was ever-reliable midfielder Lucas Matthews who picked up Noosa’s best. Todd Panaho in defence and on-ball pair Brooks Durdin and Caleb Isles also stood out.
“It was a case of two really good sides having a red-hot go in treacherous conditions,” was O’Brien’s view of the entertaining affair.
“I thought we were probably lucky to be close to them at half-time, then we had a lot of play early in third quarter.”
Palm Beach were best served by newcomer Brad Hewat, a signing from Albion in the Footscray League.
Evergreen James Drake, who looks like getting plenty of time up forward this season, was again good and another likely looking performer is Ryan Hards, one of two brothers signed by the Lions from Mildura.
O’Brien also delivered an ominous message to rival clubs when he mentioned that former Queensland centre half-back Tom Tarrant had agreed to play with the Lions.

Gorillas upset the Hawks in northside derby
IT not take too long for the QAFL’s Premier Division to provide its first upset.
Last season’s beaten grand finalists Sandgate had their colours lowered by north Brisbane neighbours Wilston-Grange in an entertaining derby at Hickey Park under lights on Saturday night.
The Grange coughed up an early lead, but fought back to take the points by 10.16 (76) to 9.7 (61), giving new coach David Martin plenty of hope in his new role.
Sandgate led 5.3 to 3.2 at quarter-time, but managed only five more goals after that. In contract, the Gorillas put on 7.14 as reward for what Martin said was courage and desire.
Asked if he was on a mission, with an emphasis on ‘hardening up’ the Gorillas, Martin replied:  “I didn’t know what Grange were like and I don’t care what happened in the past.
“This is a new group, we’ve set some guidelines and we’ll go from there,”
Martin liked what he saw on Saturday night.
“We were shellshocked early – gees Sandgate were lightening. Maybe we were a bit intimated waiting to see what Sandgate would do.
“But we became accountable and we managed to stop their switches and run-ons.”
Victory gave Martin first blood in his battle with Sandgate playing-coach Ben Long, whom Martin coached in their State League days at the Northern Eagles.
was upbeat about the result.
“It was one of those funny nights,” said Long. “We played our brand of footy early, but we wasted chances. We should have been further ahead at quarter-time.
“But Marto dropped blokes back in front of Forbes (Brendan).”
Both sides lost three players through injuries. The Grange had star signing Matt Pardew and Chis Jaenke with hamstring soreness while the Hawks had veteran Danny Dickfos (shoulder), Ben Drew (Calf) and Damien Garton (ankle).
“The disappointing things about losing them was that those who should have stepped up didn’t,” said Long.
But the rival camps believe the injuries are not long-term.
Another former Morningside player , Anthony Penny at centre half-forward, and ruckman James McMahon were other standouts for the winners.
For Sandgate last season’s best and fairest Aaron Fabian starred at centre half-back and was given good support by wingman Shane Rogerson.

Demons home after scoreboard changed
SURFERS Paradise had a nervous wait before being officially declared winners of a tight clash against Springwood at Lowe Oval on Saturday.
As the full-time siren sounded, the scoreboard had scores level, but a subsequent check by goal umpires, who added a point to the Surfers tally, gave the visitors victory by 12.9 (81) to 11.14 (80).
It was a thankful Surfers coach Rob Martin who took four points back home rather than two.
“Myself and my assistant (Wayne Davis) were pretty sure we were in front,” said Martin of the post-siren drama.
But he had plenty of praise for the Pumas.
“They were pretty good and they have some good young blokes there.”
Springwood had a 21-point lead at quarter-time but were down by two points at the big break.
In the final term, Surfers twice skipped to what should have been match-winning leads – one by 13 points, the other by 12 – but the Pumas produced some rare  mettle to fight back twice.
“They showed character to come back like that,” said football manager Adrian Wallin. “That sort of character hasn’t been around the place for some time.”
A winning move for Martin was moving former Broadbeach talent Ryan Dienjes from defence to on-ball duties in the second term. That lifted the Demons.
But it was the Dee defence that stood up.
“Our defence saved us because Springwood had a lot more inside 50s than us,” he said.
Best for Surfers were Dienjes, back pocket Cameron Steward and vice-captain Sean Atkinson across a half-back flank and in a back pocket.
For the enthusiastic young Pumas, blond centre half-forward impressed all and sundry, particularly for his marking ability, and wingman Angus Hubert and centre half-back Matt Preston-Smith also did well.

Magpies fly high in return to competition
THE return to the Pineapple Hotel Cup by the Western Magpies was not your usual comeback.
Away to Maroochy-Northshore at Fisherman’s Road, the Magpies took the points by 13.17 (95) to 11.4 (70), but not after some dramas that forced some hasty decision-making by club officials and umpires.
Because the main oval was virtually under water, a decision was made to switch the match to an adjoining oval – which was rather ironic because the Magpies home ground at Chelmer in western Brisbane was metres under water during the recent flooding.
“The conditions were absolutely atrocious and the main oval was unplayable,” said Magpies coach Peter McClennan.
The Magpies’ final tally of 30 scoring shots to 15 best emphasises an advantage they cemented only in the final quarter after Maroochy trailed by only nine points at three-quarter time.
With half-back Will Fozard in hot form, the Magpies gave McClennan plenty of hope even if kicking for goal was a bugbear he took away from the match.
“To have 30 scoring shots to 15 was a tick for us,” he said. “We had plenty of ball throughout and at the end they (Maroochy) kicked three goals from 50-metre frees.
“Our fitness is right up there. We haven’t dropped in that area at all and, in fact, I think it is better than last year.”
The win also ended a two-season drought for the club and McClennan said his players responded in kind.
The Magpies were two seasons winless in the QAFL, hence a rousing rendition of  ‘Good Old Western Magpies Forever’ afterwards.
In full cry was Fozard, who was playing his 100th seniors game for the club and highlighted it with a best-on-ground performance.
Blake McClennan, son of coach Peter, was outstanding in the midfield and another star for the winners was Bill Moorhead on a wing.
Maroochy football manager Steve Williams said the Roos were far from unhappy about their performance after the club was shredded by off-season departures.
“After such a huge exodus this was basically a new side – and we have some good senior players to come back,” he said.
For the Roos, tall wingman Kane Tyson was best, well supported by centreman James Page and Tyson Williams in the ruck.

Housego bags 10, but Sullivan goes one better
IT was certainly an eventful afternoon at Everton Park on Saturday when Mayne hosted Gold Coast unit Burleigh.
Burleigh beat Mayne, as expected, by 23.7 (145) to 15.13 (103) in a free-flowing affair, but two individual performances provided the talking points afterwards.
One was the 10-goal haul from Mayne stalwart Andrew Housego. Ten goals out of 15 for a losing side is quite a creditable achievement.
But his tally was beaten by Burleigh’s dangerous on-baller/forward Nathan Sullivan, who notched 11-1 in a magnificent performance.
Football can certainly offer some crazy statistics, can’t it.
Housego was still wondering about it all on Sunday morning.
Asked if it was the first time he had kicked 10 goals in a match, Housego replied: “Actually I have.
“Funnily enough it was in round one in 2001 against the Western Magpies – and that was 10 years ago.”
Yet as good as Housego was, left one-on-one in attack , Sullivan stole his thunder at the other end.
Used as a free agent in the 50-metre arc, Sullivan was dynamite and the Tigers had no answer to his uncanny ability to sniff out a goal (or 11).
Burleigh put on seven goals to two in the opening quarter, then another five to two in the season to effectively snuff out whatever chance Mayne had.
“I thought we took the foot off defensively after that,” said  Burleigh coach Zane Doubleday.”
Mayne kicked 11 of their 15 goals after half-time, matching Burleigh’s goals tally for the same period.
Best players for the Bombers were obviously Sullivan, Luke Rowe at centre half-forward and new captain Marcus Powell in the middle.
For Mayne, Housego was clearly the standout, while under-18 Will Stephens on a half-forward flank and ruckman John Seccull tried hard.