Nominate for the AFL Women’s Draft 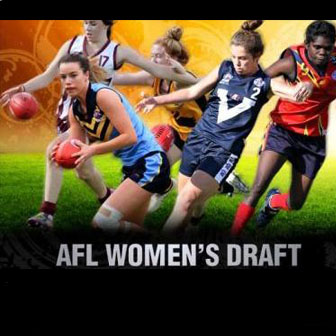 Melbourne Football Club (MFC) developed the concept and attained the AFL’s support for a female curtain raiser game on the MCG for the Women’s Week clash between Melbourne V Western Bulldogs. The MFC actively sought this home game for Women’s Round to bring to life the work they have been doing in the last four years in female participation particularly being the major sponsor of the VWFL.

All parties want to ensure that the most talented female footballers in Australia have an opportunity to start living their dreams – that of playing on the MCG and for a recognised AFL Club.

The match will take place on Saturday June 29 at 1.45pm on the MCG as the feature of Women’s Round (Round 14). For the first time teams will represent the AFL clubs and wear club guernseys.

The teams will be formed following the first ever women’s draft. Players aged 17 years and over from All-Australian teams, High Performance Academies and 2013 state teams will be invited to nominate for the draft, together with nominations received from interested parties via kicksforchicks Facebook and web applications. The Draft will take place May 15 across Australia and will be managed by the AFL.

Former Melbourne chief executive Cameron Schwab said before resigning that the objective was to create a major female participation initiative.

“We wanted to bring to life an idea that will showcase the best female players the game has to offer as well as sending a message to all girls that they may one day be able to play footy for their AFL team of support.

Western Bulldogs chief executive Simon Garlick said the match was fantastic and a practical way of celebrating AFL Women’s Round.

“We are thrilled to be a part of the match and can’t wait to see the Bulldogs’ women’s representative team take to the MCG donning the red, white and blue.

“The Dogs look forward to building on the match to encourage women, especially from our diverse backyard in Melbourne’s West, to play our great sport’.”

“The game will also foster the involvement female coaches, umpires, trainers and others in female football through their involvement in the game. It will be a feature of Women’s Round,” he said.