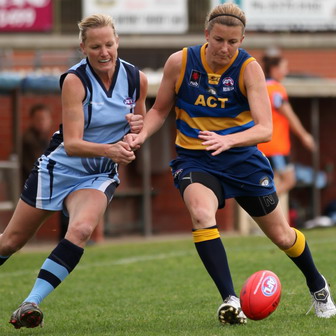 The AFL is pleased to announce the thirteenth AFL Women’s National Championships will be held in Cairns from June 17-22, 2013.

Female footballers from across the country will battle if out for a new medal at this year’s AFL Women’s National Championships.

The championships, to be held in Cairns from June 17-22, will include the inaugural presentation of a Rising Star Medal – the Melissa Backhouse Medal.

AFL Female Football Development Manager Jan Cooper said Backhouse was an excellent choice to have the medal named in her honour.

“Mel has been a tireless worker at club, ACT rep level and instrumental at driving progress for female football at a national level,” Ms Cooper said.

“It is fitting that Mel be recognised for her efforts. I am mindful that as we grow our player numbers and develop our female football culture, that those who have provided energy and time to the development of the game are valued and given a place in football history.

“By taking on the name of the Rising Star Medal Mel will be recognised beyond the Nationals format when we instigate a national home and away format,” Ms Cooper said.

Backhouse was humbled when told the news. “I feel very privileged by this announcement. There are so many women who have given so much to football so I’m feeling grateful that I was selected,” she said.

“To have the Rising Star Medal is exciting because it means there will be some incredible players win the medal over the years.”