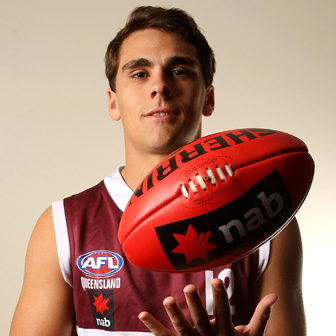 Three young Queenslanders have been picked up by AFL clubs in today’s AFL Rookie Draft while a further four local products have found new homes or been relisted by their 2012 club.

Adam Oxley (Redland), Andrew Boston (Broadbeach) and Jordon Bourke’s (Morningside) disappointment at being overlooked in last month’s NAB AFL Draft will be all but forgotten with the three set to start their elite-level AFL journey in 2013.

First to be chosen was Adam Oxley, who was listed by Collingwood at pick 35.

Oxley started playing Aussie rules in Ainslie as a six year old before joining Redland juniors when the family moved to Queensland.

A member of the Bushrangers from Under 14’s through to Under 18’s, Oxley’s commitment paid off in 2011 when he was included in the Under 18 Queensland Scorpions leadership group as an over-age representative. He was also a product

A great 2012 NEAFL season saw Oxley finish third in the NEAFL Rising Star and gain selection in the Under 21 Queensland/Northern Territory State team.

Brisbane born and Gold Coast raised, Andrew Boston will be staying close to home after being Rookie listed by the Gold Coast SUNS at selection 55.

Boston graduated from the Gold Coast SUNS Academy this year and boasts a long list of honours and awards including Broadbeach Junior Club Champion for 2010 and a State representation from under 12’s through to under 18’s.

Boston’s selection tops off a season which saw him claim the NEAFL Rising Star Award and All-Australian selection at the Under 18 NAB AFL National Championships.

Both Oxley (Victoria Point SHS) and Boston (Helensvale SHS) are products of the AFL Queensland Schools of Excellence system.

18-year-old Jordan Bourke, picked up by the Brisbane Lions with pick 56, is an AIS-AFL Academy graduate whose father Damian played 22 matches with the Brisbane Bears from 1993-95.

He becomes the first ever member of the Hyundai Lions Academy development program to be drafted onto the Club’s list.

Recognised largely as a tall forward who is strong overhead, Bourke proved a standout for Queensland in the U16 NAB AFL National Championships, earning the Alan McLean Medal as the best player in Division Two.

Ex-Southport Shark Kurt Tippet ended months of speculation over his playing future when he was picked up by the Sydney Swans with pick 11 of the Pre-season Draft.

Former Broadbeach player Ricky Pettard was picked up as a Rookie by Richmond at Pick 7. The talented forward underwent surgery after Round 18, and was subsequently delisted by Melbourne on the last day of the trade period.

Veteran ruckman Hudson will be used to ease the load of Pies ruckman Darren Jolly and has also been signed as a club ruck coach for 2013.

Peter Yagmoor was first picked up by Collingwood in the 2012 Rookie draft, making his senior debut in Round 1 against Hawthorn. He was delisted in November as part of the club’s list management strategy.