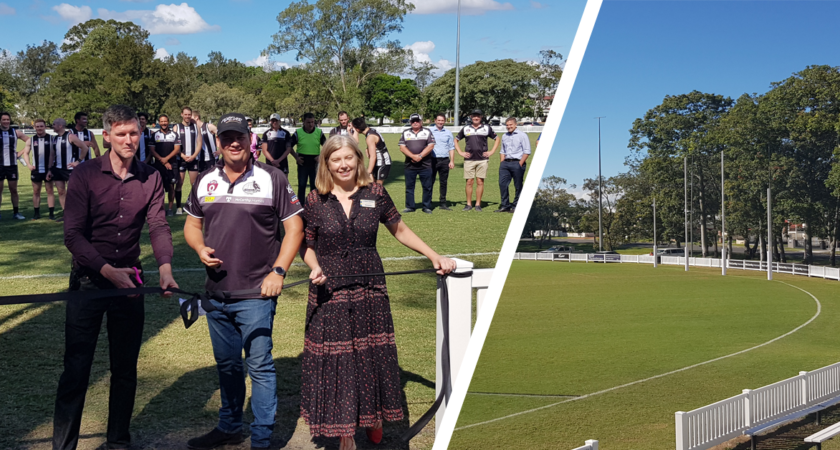 McCarthy Homes Oval has been given a new lease on life following a major renovation of the playing surface.

The Chelmer venue, home of the Sherwood and Western Magpies Football Clubs, was significantly affected by the 2011 Brisbane floods, impacting the standard of the playing surface in the years since.

The restoration was formally opened last Saturday, April 13, before the Western Magpies’ QAFL home opener against Labrador after nearly six months of work.

Sherwood Football Club President Andrew Thomson said the new facility was crucial in the longevity of the football club.

“Our club was devastated by the floods in 2011 and it’s been a long and exhaustive process rehabilitating and upgrading our facilities since,” Mr Thomson told aflq.com.au.

“However, like with any football club our most important infrastructure is our playing surface and its fantastic to finally have the surface in the condition commensurate with the blood sweat and tears spent by our amazing volunteers on preparing it each week.

“While its far from the final piece in the puzzle given the facility challenges most clubs of our size face, its arguably the most important one to date.”

Now, the venue – which also includes an upgraded white picket fence contributed by the Brisbane City Council – is fit and capable of hosting representative fixtures and female tier one games.

McCarthy Homes Oval was one of around 25 venues across Queensland’s south east to have received help from AFL Queensland’s Sports Turf Unit, who continue to improve the playing surfaces to cater for the growth of football in the state.

The Sherwood Football Club was formed in 1958 and caters for boys, youth, men’s and women’s football from the age of six to senior level where close to 150 footballers play.

As one of the biggest clubs in Brisbane’s western corridor, the Sherwood Football Club also boast 500 non-playing social members who frequent McCarthy Homes Oval every weekend.

Registrations for 2019 are still open. Head to play.afl for more details.