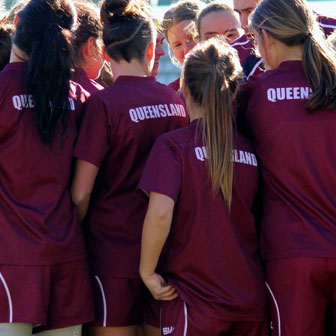 The unprecedented 61-girl academy is a huge step for female football in the state, according to the Academy’s High Performance Coach, Craig Starcevich.

“In the past the academy has just been a select group of 20 to 30 kids in preparation for the Under 18 Nationals the following year,” Starcevich said.

“But we recognised the need to expand and pay attention to those girls who are looking towards playing in the Under 16 Championships.

“So while the goals of the two squads will be fundamentally different, they will train together, which is a great opportunity for inclusion and growth in the game.”

The Academy features talent from all pockets in Queensland, with girls coming from Mackay, North Queensland, Darling Downs and Capricornia to join the squad.

With one training session left before Christmas, Starcevich said he was rapt with how the first session unfolded and the travel efforts from one particular player.

“I was very pleased with how everything ran and the most promising component was the turn out from the girls,” he said.

“Of the 61-girls in both levels, we had 39 make their way to the first training session, which is a fantastic effort considering we have 17 girls from the wide bay region and beyond – who we don’t expect to attend.

“All the coaches were really impressed with the commitment of all the girls, especially Tavia Dunne, who drove with her mother all the way from Rocky to make the session – that is something special.”

“To have someone like Jess on board is fantastic, she won bronze in Javelin at Nationals and box jumps 95cm’s, so safe to say she is a serious athlete,” Starcevich said.

The Youth Girls Academy will train again tonight before taking a well-deserved break over the Christmas period. The girls will train twice in both January and February, before training once a week in March and twice a week in April.