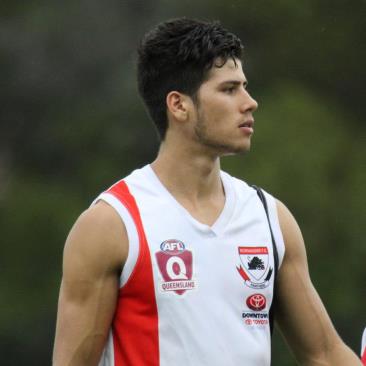 Morningside coach, David Lake, will be the first to admit that after the first quarter against Western Magpies on the weekend, he was concerned about the intensity of the returning Daniel Daye.

Those fears were soon put to rest however, as Daye produced a stunning final three quarters to finish best on ground and lead the Panthers to their ninth straight win.

“I’ll be honest, at quarter time I went up to him and said his intensity just wasn’t there,” Lake said.

“And after that he exploded, he had 10 or 15 touches in the second (quarter) alone and his run and carry game was exceptional.”

Daye looked like he hadn’t missed a beat after a two-week stint on the sidelines, playing a dynamic halfback/wing role which carved the Magpies defence to pieces.

“He has an enormous fitness base, which really showed on the weekend,” Lake said.

“He is an excellent student of the game, has that bit of flair and is a winning young kid who has has a real thirst for improvement.”

Daye’s rise to the QAFL has been remarkable, as the 19-year began as a soccer player and didn’t seriously take up AFL until his mid-teens.

Part of AFL Queensland’s 2009 Athlete Rookie Search, Daye found a new love in footy and has not looked back since.

“Watching him play you would think he has been playing competitively his entire life,” Lake said.

“He is so instinctively aware and his understanding of the modern game is exceptional, that is something you can’t teach.”

While Daye has been lauded for his breakout performance on the weekend, Lake believes the young Panther’s turning point came earlier in the season.

“When we played Sandgate back in round five or six, he showed this whole new sense of maturity and growth as a player, that was the turning point for me,” Lake said.

“I see that as his breakout game, he turned a performance into an outcome and has continued to rise from there.”

Despite the Panthers’ dominance this season, Lake is aware of Daye’s potential and expects a big opportunity will be right around the corner.

“At our level, there are players who aren’t interested in playing NEAFL, aren’t good enough for NEAFL and players who are ready for the next step, Daniel falls into latter,” Lake said.

“Someone will take him and he will be ready for a run in the NEAFL when the opportunity presents itself.”