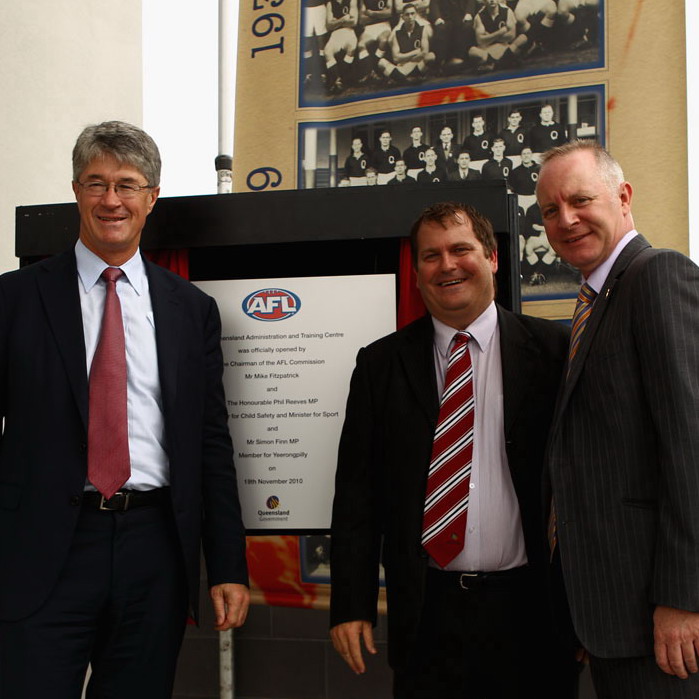 AFL Commission Chairman Mike Fitzpatrick bid farewell to one era of Queensland football and officially ushered in another as he officially opened the new Queensland Administration and Training Centre at Yeronga.

There wasn’t a rodent to be seen today as AFL Commission Chairman Mike Fitzpatrick bid farewell to one era of Queensland football and officially ushered in another as he officially opened the new Queensland Administration and Training Centre at Yeronga.

Fitzpatrick paid special tribute to the “spirit and enthusiasm” of AFLQ staff members, who had endured an extended period working in second-rate administration facilities at Coorparoo, and made special mention of those ‘creatures’ that hadn’t relocated to Yeronga.

“There’s always a positive energy and spirit at AFLQ and by that I only mean among the tenants – not the countless other inhabitants who used to reside at Coorparoo … the possums, frogs, toads, rats and the like, and often enough water at times to end the drought.

It was a comment that drew an extended chuckle from AFLQ staff members who had almost come to know the rodents living in the ceilings and walls at Coorparoo on a first-name basis.

Fitzpatrick continued: “It’s fantastic to be able to provide a first-class work environment not just to further the development of the code in Queensland but also to reward the people who have done such an outstanding job over recent years.

“All that we’ve seen happening up here of late – a second AFL team on the Gold Coast, the national draft last night, confirmation of an AFL fixture in Cairns for the last three years and so on –  is a direct result of the excellent work of AFL Queensland and its staff over the last 10 years. It’s been a fantastic achievement.”

Fitzpatrick was joined by Queensland Minister for Sport Phil Reeves and State Member for Yerongpilly Simon Finn for the official unveiling of the plaque identifying the new $6.25million project, which includes a three-story administration centre and two full-size ovals on the previous site of Yeronga Football Club.

Reeves paid special tribute to the work of AFL and AFLQ, and not just for what they do on the field but also for their community development work.

“All the talk is about AFL, and if I’d said that would happen 10 years ago you’d have people saying ‘what he’s on? I want some of it”.

“The AFL and the Queensland Government have formed a great partnership and what I especially like about it is that it’s not just about elite football but also about grassroots football across the length and breadth of Queensland.

“I’m proud to be part of a State Government that supports sport more than any other State or Territory Government in Australia, and we look forward to that continuing. To us it is about getting young people involved in sport, and that’s why facilities such as this are so important.”

There were dignitaries aplenty on hand to share what AFLQ chief executive Richard Griffiths described as “a momentous day in the history of Australian football in Queensland”.

The new AFLQ headquarters is, according to Griffiths, the single most important development for grassroots and community football in the past decade.

“With the growth of Australian football at all levels in Queensland over the last 10 years it has become abundantly clear that we needed a quality facility to maximize the opportunities we offer to talented athletes aspiring to play at the highest level,” Griffiths said.

“This will be exactly that while also providing a new administrative headquarters for the extensive AFL Queensland operation.”

The Queensland Government made a $1.5m grant to the project, supplementing the AFL’s $3million funding contribution and $1.25m worth of ground works being provided by the Brisbane City Council.