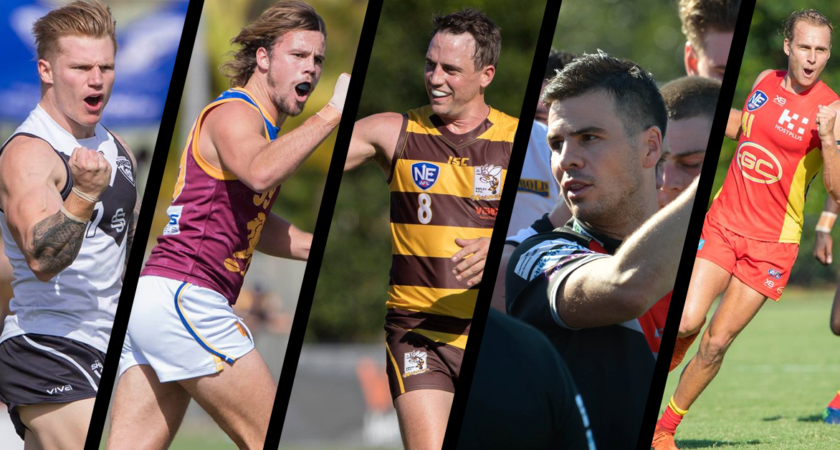 The NEAFL returns this weekend, Saturday April 6, with all five Queensland-based clubs in action.

Check out the form guide ahead of each contest below.

Reigning premier Southport will be keen to start this season as strongly as it ended the last one, while the bottom-placed Bombers will be looking to pull an upset in what should be a fascinating contest.

Both sides have something to prove early in the season, as the Sharks aim to go back-to-back, whilst Redland seek to deliver on the promises of improvement throughout the off-season.

1. Southport went undefeated in its two practice matches, including a four-goal victory over the Bombers at Fankhauser Reserve and an away win over Aspley. Redland on the other hand have suffered three losses in their trial runs, with 112- and 83-point losses to Brisbane and Aspley respectively. Redland used these matches to experiment with its relatively new squad and game plan in their bid to surge upwards in 2019.

2. With 2018 premiership stars Josh Clayton and Brenton Payne relocated, and Grand Final hero Tom Wilkinson drafted to North Melbourne, the Sharks have lost not only some real star power on-field, but a strong contingent to lead off-field. The additions of former AFL-listed trio Shaw, Willis and Williams should help ease this transition for the Sharks, but Round 1 will put the side’s ability to adapt to the test.

3. Returning Redland playing coach, and former Camperdown coach Phil Carse, has brought with him a couple of handy players from the league he spent the past four years coaching in. Cameron Spence and Ben Cunnington (both Camperdown ) have plenty to offer the Bombers, and the club will also be excited for the debut of 19-year-old gun Matt McGannon, who made the TAC Cup Team of the Year last year before being signed by the Bombers.

A close tight first-round match-up is certainly on the cards as Canberra – coming off the back a maiden finals appearance last year – hosting a Gold Coast SUNS outfit that will be eager to get back to finals football.

The Demons will be keen to turn their underdog tag into premiership contenders by starting their season off on the right note in-front of a home crowd, against an AFL club also looking to get back on its feet after a lean few years on the field.

This match will prove pivotal in building confidence early in the season with such an even and competitive competition heading into 2019. The SUNS are coming off a comprehensive victory over AFLQ side Palm Beach and a heavy 50-point loss the Brisbane Lions NEAFL side in the practice matches, whilst Canberra also recorded a win and a loss against the GIANTS and Sydney respectively in the lead up to Saturday’s season opener.

It’s anyone’s game, and the contest will be a treat for football fans to kick off 2019.

1. Canberra will be wanting to make a statement early in the season to set the tone, and more importantly build consistency which was an issue for the young team in 2018. The Demons began last season 0-2 after much hype in the pre-season – a situation they will want to avoid this time around. Practice Matches against two AFL sides will put them in a better position than in 2018, after only battling against Ovens and Murray league teams in previous years.

2. After missing out on finals last year because of a raft of injuries hampering their season, the SUNS will be wanting to make the most of a fairly healthy squad coming off a full AFL pre-season. The SUNS will likely field close to a dozen AFL-listed players for the match up in Canberra, and will be eager to give the home side a run for their money.

3. Canberra’s second and third year players will be looking to take their games to the next level and prove they are future stars of the NEAFL. This stems through the midfield with the likes of Jack Powell, Lucas Meline, Mitchell Hardie and Tom Highmore and Alex Smout down back. An even contribution all over the park is crucial if the Demons want to go all the way in 2019, and coach Kade Klemke will be looking for a true team effort this weekend.

The 2019 season has finally arrived, and it kicks off with two finals contenders from last year clashing at Blacktown on Saturday.

Sydney University hosts Aspley in an intriguing matchup from 12pm, with both sides are looking to build on impressive 2018 campaigns. Sydney University, under the leadership of Tom Morrison, will field a vastly different team from the one which suffered a shock loss to Canberra Demons in the first round of finals last year.

Meanwhile, Aspley, which was knocked out in the Preliminary Final by Southport last year, will be looking to make their case towards the big dance and a flag in 2019.

It’ll be an interesting watch for spectators as both sides showed some good practice match form. Sydney University’s younger players look exciting whilst the big names that made Aspley a force in 2018 will look to start the season off in style.

1. Where do Sydney University sit coming out of the practice matches? Sydney University’s two trial matches against the GIANTS and Swans returned differing results for the side, holding on for a good victory against the Swans in their first practice match before losing to the GIANTS in their second week. But the signs were overall positive for a young, new team in their first hitouts. Aspley will be a tough test first up for the Sydney based side, but the advantage is they’ve played quality opposition in the lead-up.

2. Is Aspley able to pick up where it left off from last year? Despite falling a game short of a Grand Final last year, Aspley should be pleased with its 2018 efforts and look on in 2019 with optimism with a new coach in Daniel Webster. Some early practice match form from the Hornets looks promising, 2019 and the Hornets will be keen to set the ascendancy with a good road win in Round 1.

3. How will Sydney University look with a new looking list? The off-season saw Sydney Uni lose a plethora of experienced players in the form of Xavier Richards, Craig Bird, Jake Derickx and Shaun Edwards amongst others. Tom Morrison’s side will line up much younger as a result and will be an interesting proposition come Saturday when premiership points are up for grabs.

There will be no greater initiation for NT Thunder’s new recruits when they take on the might of a full-strength Brisbane Lions outfit in Darwin on Saturday night.

The Lions – last year’s Elimination Finalists – are expected to take at least 18 AFL-listed players to the Top End for the opening round of the 2019 season, against a Thunder side beginning a new era without club legends Cameron Ilett and Darren Ewing, plus a few injury concerns of their own.

NT Thunder, which finished in ninth place last year with five wins for the season, will relish the opportunity to take on a quality outfit to kick off the year and test themselves against the best.

TIO Stadium hasn’t been a happy hunting ground for the Lions, and NT Thunder will hope it stays that way to kick off a new year with an upset victory.

1. The Brisbane Lions are up and about. A few early season wins for the AFL team and a strong pre-season campaign for the NEAFL side has them placed incredibly well heading in to Round 1. The likes of Lewis Taylor, Allen Christensen, Nick Robertson, Tom Cutler, and Ryan Lester all played in the NEAFL practice match against Gold Coast last week, and most of the 19 AFL-listed players against the SUNS are likely to feature against NT Thunder. Connor McFayden and James Madden are listed for fitness tests this week and could also be ready for Round 1 this week, further strengthening the side.

2. NT Thunder are expected to unveil some of their big names recruits against the Lions, and they’ll need them to fire. Former Fremantle ruckman Jack Hannath, Reserves Magarey medallist Jacob Templeton and NTFL star Clinton Gallio will play important roles for their new club, with their experience, size and strength needed to combat a fit and big-bodied Lions outfit.

3. This match-up feels a lot like the corresponding round of last year when Brisbane – at the time defending its 2017 flag – were the hot favourites coming in to the opening round in Darwin. But NT Thunder will remember fondly they caused an upset victory by one point in an epic fashion. Proving that a high number of AFL-listed players doesn’t always guarantee victory, Brisbane conceded 105 points in the match, with 90 of those coming from turnovers, as NT Thunder embraced the challenge and came out victorious.