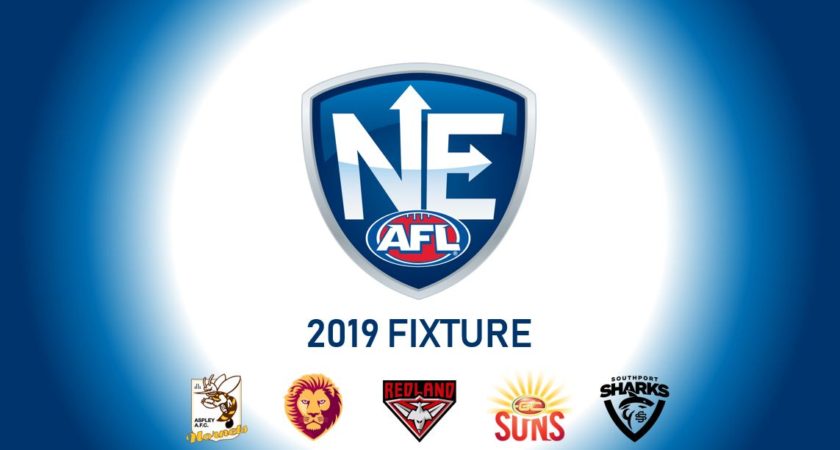 With five of the competition’s teams calling the Sunshine State home, we had a look at ten of the best matchups on the calendar for next season.

You can find the full 2019 NEAFL Fixture here.

Southport’s resurgence up the ladder in 2018 finished in the ultimate success and the Sharks will kick off their premiership defence against the Bombers at home in the opening round of the season.  Fankhauser Reserve hasn’t been the most fruitful hunting ground for Redland either, who have lost their previous three games at the venue. After failing to qualify for finals in four consecutive seasons, the Bombers have a chance to kick their 2019 campaign on the right foot under new head coach and club favourite Phil Carse.

Voxson Oval (formerly Graham Road) will provide the perfect vantage point to view the first ever Good Friday NEAFL game in Queensland on April 19. Of course, the two sides have enjoyed countless encounters at the venue in recent times, including the Hornet’s daring comeback in the 2018 Elimination Final. After being delisted from the Lions at the end of the season and subsequently signing on with Aspley, the marquee showdown will also be Liam Dawson’s first against his former side.

Scottsdale Park will once again have the opportunity to host the annual ANZAC Round showdown in 2019 between the Bombers and Thunder. The traditional fixture between the two sides has produced several highlights over the years, including dazzling performances in front of goal by NT Thunder’s Adam Sambono in 2017 and Bomber spearhead Matt Hammelmann in 2018.

For the second year in a row, Brisbane will take a home game to the Sunshine Coast – a region which has produced the likes of Eric Hipwood, Jono Freeman and Jack Payne through the Brisbane Lions Academy. In 2018, the Lions hosted Aspley at the same venue and despite fielding 15 AFL listed players, it was the Hornets who came away with the four points. This year, it will be the GIANTS who make the trip, and given the result of last season’s blockbuster, the men in Orange may very well fancy their chances.

The Bombers will venture away from Scottsdale Park in Round 11 in what will be a NEAFL/QAFL double-header at Morningside’s Jack Esplen Oval. Coinciding with the Panthers’ cross-town derby against Mt Gravatt in the Queensland state league, Redland will host the GIANTS in what will be the Bombers’ first venture to the ground since Morningside’s departure from the NEAFL following the 2013 season.

The full QAFL Fixture will be released next week.

The Gold Coast derby travels to Fankhauser Reserve in Round 11 for what will be a much-anticipated matchup between the Sharks and SUNS. What makes this showdown intriguing in the personnel likely to line up for the two sides on the day. Four of the Sharks’ 2018 premiership team has previously played for the SUNS and following the additions of more ex-SUNS in Mackenzie Willis and Matt Shaw this offseason, over a quarter of the Shark’s team could be made of players who had previously donned the SUNS’ red and gold.

Sydney will have to wait until the midpoint of the season to try and earn retribution against Southport in the 2018 NEAFL Grand Final rematch. Luckily for the Swans, this game will be on their home turf. Memories of Cody Filewood’s opening minute goal – the first of many Sharks’ majors which led to their premiership triumph – may still haunt the Swans who have now lost five Grand Finals.

Both the SUNS and GIANTS missed the NEAFL finals in 2018 despite both sides producing upwards of seven wins and their Round 17 fixture next season could determine who will qualify for the finals bracket in the new season. Of course, Metricon Stadium will host the showdown between the two AFL expansion club’s NEAFL teams as the ground will be used for all seven of the SUNS’ home games throughout the season.

The respective NEAFL clubs of Queensland’s two AFL sides will face off several times throughout the 2019 season but it’s this Round 19 fixture which looms as perhaps most crucial given the grand scope of the season. In the weeks leading up to the showdown, the Lions face a tough slate of matches against Sydney and Southport meaning claiming the four points at home are crucial with finals drawing close. The game also coincidences with the QClash between the Lions and SUNS’ AFL contingents that same night. As both teams continue to develop their lists, this game serves as an opportunity to gauge the progress of both clubs.

Voxson Oval hasn’t been the happiest of hunting grounds for Sydney, who have produced just one win at the venue in the NEAFL history despite their claim at the competition’s winningest team. You’d need to go back to Round 21 2015 for the last time the Swans came away with the four points against Aspley, who have long made their home venue a fortress. Of course, the most famous of the games between the two sides a the ground was the 2014 Grand Final, when Hornet Daniel Smith booted the game winner on the siren and hand Aspley the most improbable if victory Premierships. Round 19 is the only time the Swans will travel to Voxson Oval in 201 but the fixture, entrenched deep into the season, could provide another chapter in the two club’s glittering rivalry.

*please note fixtures may be subject to change.