National Draft Combine to kick off 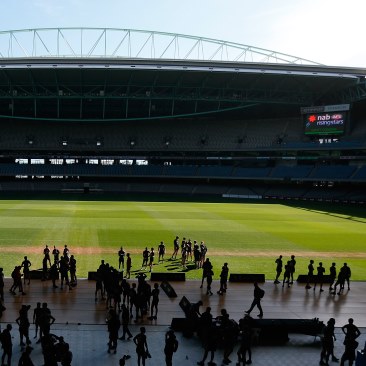 Seven of Queensland’s top talents will be pitted against the nation’s best at the NAB AFL Draft Combine this week.

Kicking off tomorrow, the combine involves four days of rigorous testing and interviews with AFL clubs, as players try to leave a final impression on AFL recruiters.

This year’s Queensland contingent is almost double that of 2013 and they will hope to be just as successful after Jarred Ellis (Gold Coast), Fraser Thurlow (Essendon) , Archie Smith (Brisbane Lions) and Jono Freeman (Brisbane Lions) all found themselves a spot at an AFL club this season.

For all bar Weller, who hasn’t lived in Queensland long enough to qualify as an Academy priority selection for Gold Coast, the combine comes the week before their immediate future could be settled, with the father-son and Academy bidding meeting next Monday.

The players will be tested across a range of disciplines, measuring attributes such as agility, speed and endurance, as well as specific football skills.

For a player to be invited to the National Combine, at least five clubs must have registered interest in him.

Starting with an eye test tomorrow, tests will include the traditional beep test and 3km time trial as well more recently introduced tests, including the Matthew Lloyd goal kicking test.

101 prospects will attend the combine this year and AFL National and International Talent Manager Kevin Sheehan said it acts as a measuring stick of players’ attributes as potential AFL players.

“With the NAB All Stars match on Saturday being the final match around Australia for players to showcase their playing ability, it is now down to the analysis of the physical abilities and personalities at the Draft Combine,” he said.

“The next week will be an up close and very personal look for a player’s ‘X’ factor or competitive advantage which could help him become a draftee. Over 150 recruiting staff will observe the players’ every move over the next four days.”

Robert Blood (Southport), Will Kristelly (Maroochydore) and Paul Hunter (Redland) will be among the state screening invitees, attending single day of testing at Etihad Stadium on Friday, October 3, after at least two clubs registered interest.

The NAB AFL Draft will take place on the Gold Coast on Thursday, November 27.