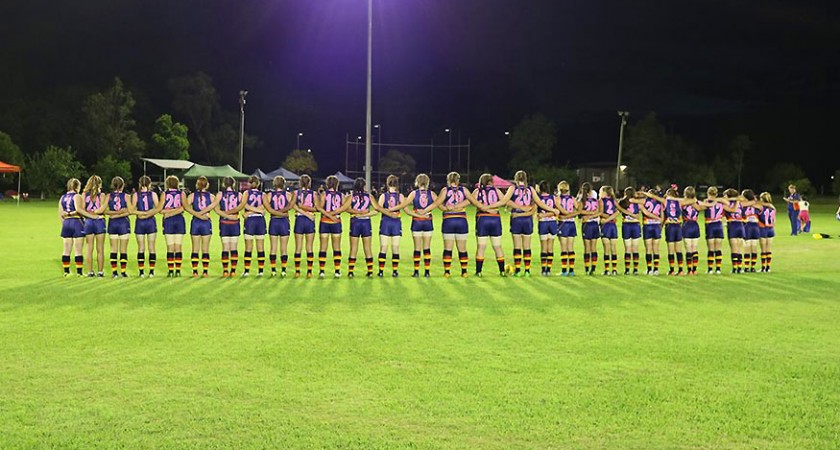 Narangba Crows President Michael Cox doesn’t really believe in trophies. The forty-seven-year-old account manager judges the success of his club by a different metric; how many kids come back to play next year.

It’s a philosophy that’s initiated a strong period of growth for the North Brisbane club, who’ve gone from 85 players in 2013 when Michael started, to 201 now.

‘Coxey’ isn’t in it for the rewards, but that didn’t stop the Crows naming him as an honorary life member at the club’s awards night a fortnight ago.

“I was very excited to get that, very honoured,” said Cox, a mad Carlton supporter.

According to Coxey, he found out about the vacant position at a barbeque and hasn’t looked back since.

“It’s been fantastic,” he said.

“There’s no arguments there’s no dysfunctional meetings, everything goes in there, we work out what we need to do, we get it done and it continues on from there.

Though trophies matter little, Coxey says a bit of success is ‘nice to have’ and the Crows have certainly delivered in that area, with four of their six youth teams playing in grand finals this year.

Perhaps it’s something to do with another one of Coxey’s beliefs.

“I always say to parents, let the kids play where they’re most happiest, because at the end of the day that’s where they’re going to play their best football,” he said.

In a typically team oriented manner, he also attributes the club’s achievements to those around him.

“I really put down the success of our club to all of our members, because they’re the ones that are out there every day,” he said.

“My job’s pretty easy when you’ve got a great membership base like I do.”

Cox contends that 2017 has been the most successful year that the Narangba Crows has ever had, nevertheless, he’s already planning for the future.

“Obviously we’d love to be able to create a women’s team,” he said.

Given the club’s current trajectory, he might just get his wish.