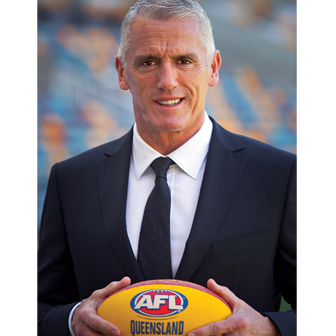 The 210 game VFL veteran will strap on the boots for the Byron Bay AFL 9s Invitational tournament to be held at the Byron Bay Regional Sports and Cultural Complex on October 11 and 12.

AFL 9s, the AFL’s social version of Australian football, is a fast, free-flowing, 9-a-side game played on a smaller field. It’s ‘touch’ style football with no tackling or bumping allowed.

The Byron Bay AFL 9s Invitational tournament will see the best AFL 9s teams from across the country compete over two days for $16,000 worth of prize money in men’s, mixed and women’s tournaments.

Conlan said it was the lure of Byron Bay and the chance to play with some old friends that coaxed him out of retirement.

“When I got the call from AFL General Counsel Andrew Dillon to say that he was putting together a team I didn’t have to think twice,” said Conlan.

“This tournament is unique. You’ve got a strong AFL 9s competition with the opportunity to win great prize money and play against ex-professional players in a really social, laid-back environment.”

It may have been a few years since Conlan last played but he’s confident he’s still got the goods.

“I’ll be ok as long as the team positions me in front of goal,” he said.

“I’ve also managed to get in some heat training while on a work tour of Mackay, Townsville and Cairns so the competition should look out.”

The Byron Bay AFL 9s Invitational will take on a festival feel and both players and spectators will have the chance to sample some of the local crafts, with onsite artisan stalls featuring music, food and Byron Bay products.

It’s not too late for teams to register with places still available in all divisions.

Day one of the competition will see a round robin format, with each team playing the others in their pool, before teams will fight it out for the ultimate prize.

Matches will be all over by 4:00pm on Day one, giving players plenty of time to soak up the laidback Byron Bay atmosphere.

Head to www.byron9s.com.au for more information or to register your team