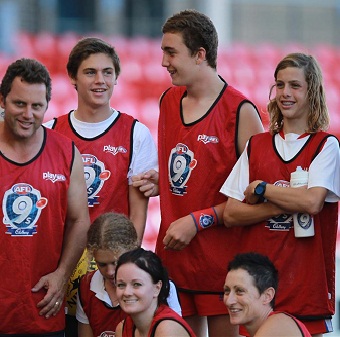 It’s not often the boss tells you take the afternoon off and have fun.

But that was the case last week when over 80 men and women hit the field at Metricon Stadium for the inaugural Cadbury AFL 9s Corporate Challenge – part of NAB AFL Draft week celebrations.

It didn’t matter than some of the players had never picked up a football before – players from the Brisbane Lions and Gold Coast SUNS as well as AFLQ staff were on hand to teach the basic skills and simple 9s rules.

There were also some very interested onlookers, with the AFL’s Chief Operating Officer Gillon McLachlan, AFL General Manager of National and International Development Andrew Dillon and AFL Queensland CEO Michael Conlan all on hand to offer support to the participating teams.

“The game is just over 2 years old, so it is fantastic to see it out here on Metricon Stadium,” said Renner.

“Local Gold Coast businesses have shown great support for the day which is great for the game and a real sign of things to come.

“It’s easy to learn, easy to play and promotes team building which makes it perfect for corporate days like this.”

The afternoon also gave everyone a chance to chat with the AFL players and featured a question and answer session where players were grilled on issues such as pre-season training, thoughts on the strength of their squad and how they adapted to life after hearing their names called out on Draft night.

Once the games were wrapped up, players enjoyed some well-earned footy food on the interchange bench and took time to grab some signatures and photos with the Lions and GC SUNS stars.

If your business is interested in hosting an Cadbury AFL 9s corporate or team building event contact marc.seen@aflq-new.fspdev.com

Another title for PBC
Tigers heat up in Cairns