MATES BACK AT WAR 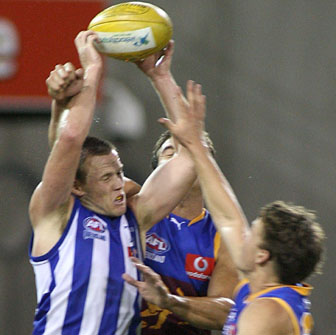 The special bonds forged during a highly successful State campaign will be forgotten when Mt Gravatt host the Northern Territory Thunder.

The special bonds forged during a highly successful State campaign will be forgotten for three hours on Saturday when Mt Gravatt host the Northern Territory Thunder for the first time at Dittmer Park.

Mt Gravatt captain Nathan Gilliland was among a plethora of Queensland’s outstanding players in the thumping 79-point win over Tasmania, joining Thunder onballers Cameron Ilett and Kenrick Tyrrell in a dominant midfield.

The Thunder duo will be two of the main targets that the Vultures need to shut down this week, with big ruckman Tyrrell capable of giving his fleet-footed running brigade first use of the ball and Ilett among the top midfielders in the competition.

The Thunder play the game at a breathtaking speed and boast a skilful band of running players, although Gilliland will be well prepared after the lightning fast match with Tasmania.

“It was a good level. You had to be really quick with your hands, especially in close,” Gilliland said of the experience. “You didn’t have much time. We had a very good midfield and we rotated three blokes who were just as good coming on as going off.”

“The first quarter was pretty tight but after that our blokes just took off,” Gilliland said. “We got one back on them (for losing last year).”

The QAFL competition resumes with the Vultures sitting in fifth place, one game ahead of the Thunder.

The two fought out a classic contest in Alice Springs a month ago, with the Vultures prevailing by four points on the back of a six-goal haul from Shane Morrison, who is expected to return from a foot injury on Saturday.

Gilliland is not expecting a let-down after the big build-up to the State game – after he won the medal for Queensland’s best player against Tasmania at the same time last year, he surged through the second half of the season to win the Grogan Medal for the competition’s best player.

“There will be no letdown – it is a normal week where we get back into training and prepare for the NT as we would any other week,” he said.