Magpies go back to the future 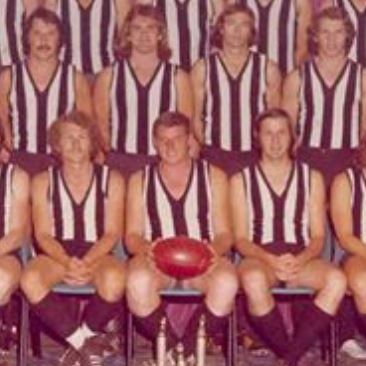 The Western Magpies are bringing together their golden generations, as they tie history with the next era of the club.

Players and coaches from the club’s successful reign 1970s and 80s as Sherwood Football club, watched on as the  Magpies played out a thriller with traditional rivals, Mt Gravatt, at Chelmer last weekend.

One of those was club legend, Bill Pierce, 1983 Grogan Medallist and Magpies junior.

Pierce, after whom the club’s best and fairest is named, said the reunion, which saw some men travel from interstate, was a perfect way to reconnect people with the club.

With a long time between drinks, Pierce said it wasn’t football that dominated the discussion, rather catching up on everyone’s lives.

Pierce said it was important to build relationships between past and current players, who left a significant impact on the Magpies.

“They helped shape the culture of the club and that was important and something they had done very well,” he said.

“It was good to celebrate the success we had- the some of the ex-teammates, not always the successful teams go through hard times, you help the club stay together.

Paul Grentell will be one of many who represent the more recent generation of players and coaches, since the formation of the current structure of the Magpies in 1999, at this weekend’s reunion.

Grentell has been involved with the Magpies for most of his life, playing in the first game as the reformed Magpies in 1999 and going on to become a dual premiership coach of the side, tasting the ultimate success in 2006 and 2008.

having been through some successful and some lean times with the Magpies, Grentell said it was important for the club to continue to build on its strong culture, that has kept it close to his heart.

“The club really seems to rally when they’re in strife and we were still getting 50 or 60 to training,”he said.

“Through thick and thin the club seems to stand up.”

Grentell said he hoped the reunions would help to grow the Magpies community, both with returning and new members.

“The idea is to reignite a bit of passion for the club,” he said.

“Over time, they might have thought I won’t go down this weekend and that becomes 12 months and then it’s been too long, so this is an excuse for them to step back (into the club),”he said.

“Everyone’s got something to offer, so hopefully it reignites their desire to be involved with the club more formally.

Ultimately, the club hopes the Mt Gravatt match serves as a date for an annual Old Boys’ day, with players from all generations attending.

Gold Coast SUNS midfielder Jeremy Sharp has been awarded the Round 18 NAB AFL Rising Star nomination after a career-high 30 disposals in just his sixth AFL... [more]