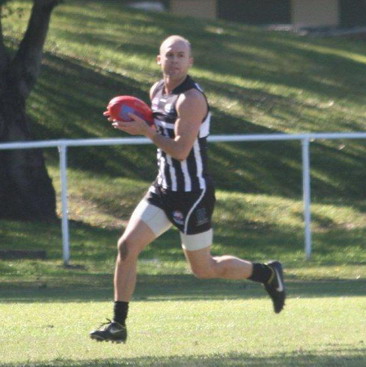 RIVAL coaches Peter McClennan and Beau Zorko had contrasting opinions as they reviewed Saturday’s Pineapple Hotel Cup match of the round between Western Magpies and Surfers Paradise.

The Magpies remained top of the ladder after beating the Demons by 11.17 (83) to 9.12 (66), but McClennan (Magpies) and Zorko differed wildly on the whys and wherefores behind the result.

Zorko claimed the Demons should have won the game after they trailed by only two points at three-quarter time.

Asked why, he replied: “In the last quarter we kicked 1.6, including four behinds in a row to start.

“Reverse that and I think it’s a totally different ball game.”

McClennan countered by revealing the Magpies were down to the bare 18 players for the final stanza after losing James Rozynski (ankle), Chris McClennan (hamstring), Ed McDonnell (shoulder) and Hayden Thick (ankle).

“We lost Jimmy (Rozynski) in the second quarter and had no bench after half-time, so from that point of view I was pleased with the way the guys dug in,” he said.

“Then in the last quarter they held their structure, the zones were working and the discipline was there.”

The simple fact that the Magpies had 28 scoring shots to 21 suggests they were deserved winners.

Yet Zorko took plenty from the hitout against the league leaders and a side that looks certain finalists.

“We knew we’d take time to work into the game after a weekend off, but we played some dumb footy at times.

“The use of the long ball against them is important because you need to negate their running style.

“We stepped up the physical pressure after quarter-time and forced them to work for every kick they got, but we just quite couldn’t convert chances like they did.”

The Magpies had winners in middleman Tim McEvoy and defenders Sean Mewing, Greg Lavey and Will Fozard.

Rover Jake Ryan, young Brodie Haberfield in a back pocket and midfielder Ryan Dienjes were the pick of the Demons.

The Magpies, meanwhile, are concerned over the immediate futures of star pair Rozynski and McDonnell.

McClennan said McDonnell could be four weeks, even longer, and midfield hardman Rozynski is `definitely’ a couple of weeks.

SANDGATE lost on the scoreboard and also lost heavily on the medical front after they fell to Palm Beach-Currumbin at Lemke Road Oval.

Beaten 21.13 (139) to 10.2 (62) by the Lions, the news that ruckman Brendan Forbes and centre half-forward Liam Rutledge will miss the rest of the season completed a dog’s day afternoon for the Hawks.

Forbes sustained a broken leg and Rutledge a fractured cheekbone during a clash dominated for three terms by the Lions.

Coach Daryn Cresswell said his side played the best three quarters of football/ in his time at the southern Coast club.

Cresswell said the Lions relished the wide open spaces at Lemke Road, which allowed them the freedom of movement they obviously revel in.

“For the first half and in the last quarter the attack on the ball and our ball movement was terrific,” Cresswell said.

“It was the best I’ve seen since I’ve been at the club.”

The Lions were sparked by a seven-goal haul from small forward Beau Runnalls, but it was the work of Ryan Hards (45 possessions on ball) and defender Chris Williams, in his return to the seniors, that did most damage.

“He (Williams) is as hard as anyone I’ve seen at this level,” noted Cresswell.

Sandgate player-coach Ben Long was understandably lamenting tghe loss for the remainder of the campaign of `probably our two most important players’ in Rutledge and Forbes.

On top of that, Pat Walsh and Jacob Hipwell will miss weeks after both strained hamstrings.

“We were horrible in the first half,” Long said.

“We pride ourselves on being comp’etitive, but this time we weren’t.”

Trent Fuller, Mike Richardson and Ben Beaven were best for the Hawks.

SPRINGWOOD are finally on the Pineapple Hotel Cup board after beating fellow strugglers Coolangatta at Lowe Oval on Saturday.

The Pumas led by 56 points after their blazing start and were never in danger.

“It’s probably more relief than anything, but we just wanted to stick to what we’ve been working on  and we were lucky to get over the line.”

King said there is still plenty to work on, but he was happy the way his players stuck at it through the whole game.

Coolangatta coach Neil McKay best summed up proceedings when he said: “We talked the talk, but we couldn’t walk the walk.

“We got smashed at stoppages  I think we won one, but the Pumas won the ball and our backline was under the pump from then.

McKay said, considering the Blues kicked six in the second quarter, why his players could not have started the same way.

“We knew what we had to do, but we didn’t stand up. It makes you wonder why they could not have done that from the start.”

Springwood had winners in Jake McGill, young ruckman Mitchell Vasterink and Chris Veneman and for Coolangatta  Jeremy Cross was good in a variety of roles, midfielder Ben Dovey was solid, as was defender Ali Pinda.

THE only downside, if there was one, to come out of Saturday’s big win over Burleigh for Maroochydore coach Roger Delaney, was a final-term slumber.

“The only disappointment was the finish, but we won, and that’s the main thing,” Delaney said after his players almost racked their cues too early.

It was a bi start for ther home side, who smashed the listless Bombers with 9.1 to 2.0 in the opening stanza.

“We’ve been like that all year and the most disappointing thing was our poor decisions early.

“You set some guys some tasks to slow the opposition momentum, but nothing happened.

“At quarter-time it was almost a case of me throwing the hands in the air trying to get players At least the Bombers turned things around and made a game of it as standout defender Tim McKay, full-forward Jay Allen (six goals) and 2011 best first-year player Sam Brown shone.

For the Roos, onballer and forward Jarrod Gale was the pick, ahead of James Page (onball and forward) and utility Jared Clarke.

Wilston Grange made the trip up the highway to the Tigers lair and came away with 4 very valuable points.

The Gorillas applied enormous pressure from the first bounce and were rewarded with a 2 goal lead at the first break.

Coach David Martin was pleased with the all round performance of his side, ”It’s the first time in a number of weeks that we have been able to put a balanced side on the track, our ball carrying and run allowed us to get the ball up forward much more directly,” Martin said. “Matt Trewhella went to Centre Half Forward and helped organize the forward into a very effective unit,” he added.

The Tigers were well served by Full Forward Danny Brewster who kicked 6 goals with Jason Boydle, Peter Trompf and Tom McKittrick all putting in strong performances.

Best for the Gorillas in their 26 point victory were Brenton Ogle, Matt Trewhella, Steve Brittain and Hugh Campbell.