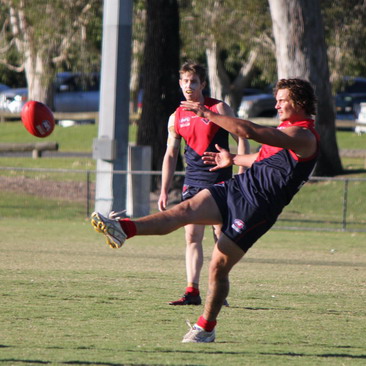 SURFERS Paradise coach Beau Zorko knows Saturday’s trip to Chelmer Oval in Brisbane is one that will provide clear indication of where the Demons are at when it comes to talking premierships.

The Demons face up to ladder-topping Western Magpies, a road trip Zorko rates up there with the long haul to Noosa as the most demanding away fixtures on the season calendar.

With a washed-out game against struggling Springwood in hand, the Demons currently are fourth on the ladder on 20 points, level with Mayne, Wilston-Grange and Sandgate.

The Magpies (seven wins and a loss from eight starts) are two wins clear of them, which gives the visitors not only the chance to bridge the gap, but also to bowl over a clear flag favourite.

“They have a core group that has been together for some time and they are playing good footy,” Zorko said. “But so can we.

“We certainly believe this is a big test and again another opportunity to take a big scalp.

“It’s a fantastic opportunity to see where we’re really at running into the second half of the season.

“The Magpies certainly know how to use the footy when they’ve got it.”

The Demons have one change, bringing in Aaron Rolfe for youngster James McNamara, who is playing for the Gold Coast Suns reserves.

Coach Peter McClennan said his club is anticipating a serious challenge from the Gold Coast outfit.

“It’s looking like a real competitive game and we know they’re going to have a dig at us,” McClennan said.

“We’re really looking forward to it because it seems they like to attack and they have some key players they’d like to have a dominance around the ground.”

PALM Beach-Currumbin get back their representative group of Ryan and Brad Hards, Michael I’Anson, Angus Munro and Jake Smart for their road trip to Sandgate on Saturday.

Also resuming action at Lemke Road is top defender Chris Williams, back from injury and with two reserves runs under his belt.

But a certain non-starter for the Lions, the man insists, is coach Daryn Cresswell, who made a surprise appearance last weekend and kicked seven goals against Springwood.

Sandgate have big Brendan Forbes back from Country Stockmen duties, but have also a couple of other major changes in player personnel.

But returning after an aborted stint with NEAFL club Aspley is 2010 best and fairest Aaron Fabian, joined in the new faces by Kurt Adams, the son of former club coach and current president Graham.

LADY Fortune has smiled on the Maroochydore Roos, who face Burleigh at Fisherman’s Road on Saturday.

The improving Roos were to have had seven changes to their line-up for last weekend’s washed-out clash against Coolangatta.

Instead, coach Roger Delaney has a full compliment to choose from, with the exception of skipper David Hulsman (season-ending knee injury) and midfielder Josh McPherson, who has returned to Melbourne.

Other than that, we’re pretty close to full strength,” Delaney said of a game that gives the Roos the chance to stay in touch with the top five.

At the same time, Burleigh get the chance to get off the bottom of the ladder with their first win of the season.

Of the three wooden spoon candidates, Coolangatta (21.5) have the worst percentage, behind winless pair Springwood (42.5) and Burleigh (34.1).

“This time it’s five,” he said. “We have guys unavailable through work and others who apparently have better things to do.

“Still, this week was the best training we’ve had for a while and we’re still getting good numbers there.”

Burleigh lose big Adam Thornley, but get Tim McKay back from rep duties and Jeremy Kohler from injury.

COOLANGATTA regain experienced captain Mark Greeney and Josh McCleary, and named ex-Labrador forward Mark Vigus and ex-Southport utility Kapun Morris in their side to play Springwood at Lowe Oval in Brisbane on Saturday.

That is bright news for the Blues, who have suffered their nickname for too long this troubled season.

Springwood are much in the same boat, although their performance chart has been nowhere near as erratic of their Gold Coast rivals.

Coach Tim King has lost full-back Matt Preston-Smith but there is a chance former regular Andrew Sponneck could make a surprise return to the Puma line-up.

Noosa sit in 3rd spot on the ladder with 24 points and a massive percentage below them on 20 points are their opponent for this weeks game, Wilston Grange. The Tigers have lost a couple of close games against the Demons and the Magpies but their form has been relatively consistent.

The Gorillas form on the other hand has been up and down.

“ We have been unable to field a consistent side all year,” said Gorillas coach David Martin. “We have had 4 to 6 changes each week due to work, injury and Rep duties, it’s impossible to get any continuity under these circumstances.”

“This is a big game for us, a loss could put us 8 points behind the leaders with more than half the season gone, the inclusion of Steve Brittain, Matt Trewhella and Matt Stevens is a big plus for us,” said Martin.

Noosa coach Wayne Fletcher concedes that this is a big game for the club. “If we win this we go 8 points clear of Wilston Grange and also Mayne, who have a bye. With the right results we could even be equal 1st.” said Fletcher.

“We get our Rep players back but have lost Brendan Wulf, Steve Simpson and Danny O’Brien due to injury, playing at how is an advantage for us but the Gorillas are always hard to beat, it should be a tough game.” he said.