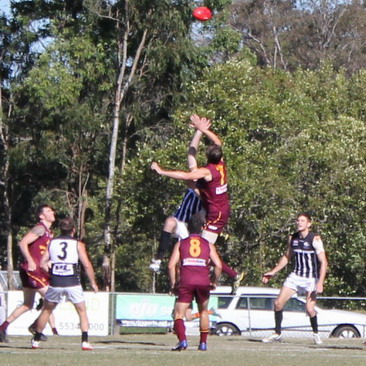 FOR the third time in as many matches against genuine flag contenders, Palm Beach-Currumbin have fallen away badly in the closing stages of a match.

But, rather than deliver another blast and label his charges as soft  as he did the previous weekend  Palm Beach-Currumbin coach Daryn Cresswell drew a number of positives from the Lions’ loss to Western Magpies at Chelmer on Saturday.

The Magpies were missing eight regular players, but so were the Lions lacking some big names.

“We just stopped and they kicked seven goals,” Cresswell said of the fourth quarter.

“We had some young blokes in today who couldn’t maintain the intensity and they ran out of legs.

“But, at the end of the day, we’ve now lost three games when we’ve been in a position to win them.”

Ageless Jamie Drake was again a standout for the Lions, who had onballer Matt Curtis and central defender Chris Williams as their best.

And Cresswell had a word for 16-year-old Mitchell Bury, who played on a good one in Val Pope, who went goal-less.

For the Magpies, it was business as usual, again underlining their immense depth of talent in the playing ranks.

The Magpies were even able to overcome four goals from 50m penalties against them.

Coach Peter McClennan, who was lavish in his praise of skipper Chris Mihalopoulos in the middle, thought Palm Beach’s fitness and not sticking to their game plan eventually told on the visitors.

“Miha was very, very good the way he led the side and the football he played,” McClennan said.

Ruckman Dominic Beer, regular ruckman Hayden Thick, who played full-back on Bryce Perry-Bolt and Mihalopoulos were best for the home side, while Greg Lavey kicked five goals as a replacement for injured Alex Dickfos.

MAROOCHYDORE mastered the mud and almost mastered Surfers Paradise in a tense clash at Fisherman’s Road.

The Roos and the Demons fought out a surprise draw, 7.9 (51) apiece, in boggy conditions Surfers coach Beau Zorko described as the worst he had seen for a football match.

“They (conditions) were as bad as I’ve ever seen, players were unrecognisable in the final quarter  under beautiful, sunny skies,” Zorko said.

“At recovery this morning there were guys still with mud in their eyes and ears.

“Still, I’m not using that as an excuse. We took time to adjust to the way the game was needed to be played.

“It needed to be playing for territory, playing a bit like rugby union, not Aussie rules, because it was a war of attrition.”

Almost-successful Maroochy coach Roger Delaney said the game was there to be won, especially late when the Roos had the final two scoring chances.

“I don’t think we blew it, but we had opportunities to win it,” he said.

“I would have liked to have the guys getting a win against a top-five side, which is something we’ve been desperately trying to do.”

At least it was the next best thing to a win for the Roos, who had Kane Tyson in the middle, ruckman Jed Turner and onballer Declan Magill as their best.

For Surfers, centre half-back forward Trent McIntyre, half-forward Aaron Rolfe and Simon Fenton in the middle were the pick.

SANDGATE saw off Coolangatta easily in their clash at Lemke Road Oval, but paid another heavy price, this time losing another key player for the remainder of the season.

On top of injuries to Brendan Forbes (broken leg) and Liam Rutledge (fractured cheekbone), the Hawks lost Sean Cornish with a broken jaw in their 18.12 (120) to 5.5 (35) win over the Blues.

Although there is good news at the Hawks with confirmation 2010 best and fairest winner Aaron Fabian has been cleared by NEAFL club Aspley and will resume with the green and reds next weekend.

On Saturday Coolangatta started poorly, failing to trouble the scoreboard attendant in the first quarter when Sandgate rattled on 4.2 on a drying ground.

“We started well,” said Long. :”Our ball use was good and we put them under pressure.

“But through the middle parts, probably in the third quarter, were disappointed. But then in the last quarter, when we wanted to build up some momentum to carry over to next weekend, we were good.

“We finished off strongly going into the game against the Western Magpies.”

Sandgate were best served by skipper Trent Fuller at half-forward, rover-forward Will Bradley and towering 19-year-old ruckman Troy Millard, a signing from Aspley.

As the final scoreline suggests, Noosa were several levels above the Bombers, whose coach Zane Doubleday had nothing but praise for the side chasing a third successive premiership this year.

“They’re an impressive unit, you cannot be anything but be impressed by them,” said Doubleday.

“They just get the job done. They’re aggressive the way they play but they’re not idiots doing it.”

The Tigers were sparked by forward Danny Brewster, who kicked 10 goals  his second such tally for the season  and joined Western Magpies’ Anthony Corrie on top of the goalkicking tallies with 52.

“He worked extremely hard and got the reward,” said coach Wayne Fletcher. “It was the same with Adam Eady.”

Fletcher also praised half-back pair, skipper Adam Bovalino and Owen Bailey, and had a word for Nathan Winter in the midfield.

Winter missed selection in the 2011 grand final, but has worked hard to make up for it this season.

“He has improved in leaps and bounds,” said Fletcher. “His game has been full of determination this year.”

SPRINGWOOD caused a bit of an upset when they held on to win against a fast finishing Mayne at Lowe Oval on Saturday.

Mayne Coach Mitch Ferguson said, “Springwood came out fighting and we just couldn’t find a winner up forward all day. We had a bad day with injuries loosing Corbin Sellen in the warm up and then both Luke Faulkner and Adam Stevenson before ¼ time with ham string strains.”

Pumas’ Football Manager Adrian Wallen was excited by the change in attitude of the players around the Club. “The guys have a new found belief  in themselves and their team mates, young guys like Jake Magill and Daniel Bridge have moved to the next level.” Wallen said.

The loss puts a big dint in the Tigers finals aspirations, “seeing that we haven’t won a game in a month I’m more interested in getting a win than worrying about the finals.” Said Ferguson.