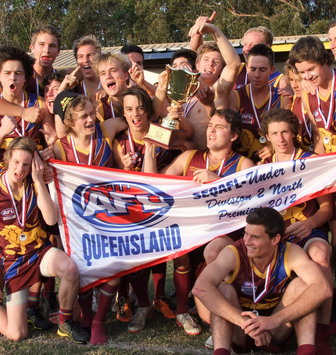 The Lions came into the Grand Final as the strong favourites with an average winning margin during the home and away season of 104 points.

Having defeated the Roos in the semi final by 125 it looked likely to be plain sailing for the Lions but the Roos had other intentions.

With an inspiring start of the game Roos jumped out of the blocks early with six scoring shots resulting in two goals, the Lions had a few shots on goal but none through the big sticks until late in the quarter.

Leading by five at the first break the Roos were again accurate in front of goals kicking away to a 23 point lead during the second term until the Lions pegged back three late goals to trail by 10 at the main break.

The Roos continued to come hard at the Lions in the third quarter but kicked their only goal for the term early in the first few minutes.

The third quarter was an arm wrestle for some time with solid pressure from both sides across the ground.

Mid way through the third Glasshouse finally strung a few goals together with relentless pressure from Dan Kelly and Alex Peterson in the midfield to give them a three point lead at the last change.

The last quarter was all the Lions with numbers in the mid field preventing any forward attacks from the Roos.

The Lions then piled on four unanswered goals taking a commanding lead.

With six minutes to go the Roos had a sniff at a comeback kicking a goal bringing the margin back to 21 with plenty of time to spare.

To the credit of the Lions they did not let that rattle them and continued to cap off the game with another two goals to take out the title by 34 points.

The Lions were led by James Haydock and Dan Kelly and a best on ground performance from Alexander Peterson contributed significantly to their victory.

The Roos certainly had their opportunities but ran out of legs during the third term with solid performances from Griffin Douglass, Nicholas Mills and Nicholas Selman.